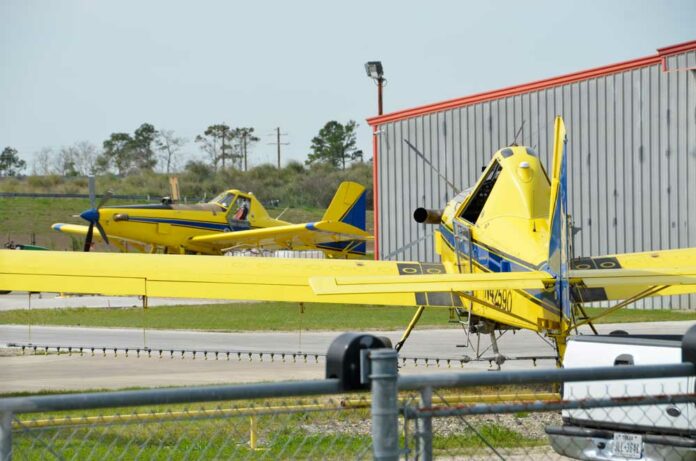 In 2017, Hurricane Harvey originated from a fast-paced westward-moving tropical wave that emerged from Africa over the eastern Atlantic Ocean. After initially breaking apart in the Caribbean Sea, the remnants of Harvey continued to produce significant convection as it traversed the Caribbean Sea and Yucatán Peninsula. The system reached the Bay of Campeche in the Gulf of Mexico on August 23, 2017 and soon became Hurricane Harvey on August 24, 2017. On August 26, 2017, the hurricane made landfall on San Jose Island, just east of Rockport, Texas with sustained winds of 130 mph. The hurricane made a second landfall on the Texas mainland, at Rockport, three hours later in a slightly weakened state. Harvey’s center drifted back southeast, ultimately re-emerging into the Gulf of Mexico on August 28, 2017. Once offshore, deep convection persisted north of the cyclone’s center near the Houston metropolitan area along a stationary front, resulting in several days of record-breaking rainfall.

The flooding was immediate and intense. The dry hangar floor of Twin County Air-Ag, Inc was soon inundated with flood waters mixed with petroleum and waste. The operation’s four aircraft and five support vehicles were submerged or partially submerged after more than 60” of rainfall. Jeffery Leger and his family could do nothing but wait until the waters receded.

Jeffery Leger was born in 1953 in Beaumont, Texas, not too far from where the flooding occurred. Jeffery is one of eight children. He grew up working on the farm alongside his brother, and as a boy would watch the Stearmans of the era fly amongst his father’s rice fields, often dreaming of becoming an ag-pilot. At 15, Jeffery’s dad took him to M & M Air Service and asked if they could put him to work. For the next few years, Jeffery flagged fields, cleaned floors and repaired wings. After graduating high school, Jeffery and his best friend, Ricky Schroeder, took off for flying school at Ed Boardman in Fort Worth, Texas. Jeffery returned to begin his first ag season in 1973.

After 10 successful seasons with M & M Flying Service, Jeffery left and began flying closer to his home and over the following 10 years worked his way into his own operation. In 1991, Jeffery partnered with four local rice farmers and broke ground as Twin County Air-Ag, Inc. with an Air Tractor AT-30 (later converted to a 401). Two years later, Jeffery bought out his grower-partners and purchased his second aircraft and added an additional pilot, Glenn Menard. Glenn continued to fly for Jeffery until his retirement in 2012. Also in 1997, an AT-402 was added to the Twin County Air-Ag fleet. This would be Twin County Air-Ag’s first turbine aircraft. In 2000, Twin County Air-Ag added a third aircraft, a B-Model Ag Cat for Jeffery’s son, Jeffery Leger Jr., (Little Jeff), to begin his ag pilot career.

Jeffery Leger worked 44 seasons to build his business with his family. In 2016, Twin County Air-Ag, Inc. was at the peak of its operations. Bank notes were almost paid off, business was steadily increasing and the company was expanding. However, 2017 had other plans.

On February 11, 2017, Jeffery’s lifelong friend, Ricky Schroeder, (who had been flying for Jeffery) was involved in a non-aviation related accident (a fall) and succumbed to his injuries. This left a major void for Leger as he and Ricky began their ag flying career together so many seasons ago.

In April of the same year, Jeffery was flying alongside his son, Little Jeff, applying herbicide on rice. Little Jeff had just departed with a full load, all-the-while Jeffery was right behind him in the Air Tractor. As Jeffery was about to depart, four words broke the squelch on the radio. “Twin-County, I’m going down”.

No other transmissions came from Little Jeff and his Ag-Cat. The next sight, as Leger broke ground in the Air Tractor, was a large column of black smoke on the horizon; he feared the worst.

As he approached the downed aircraft from the air, Jeffery Leger was prepared to dump the entire load to extinguish the flames to save his son. Luckily, Little Jeff was already outside the wreckage. He had suffered an in-flight fire and managed to get the aircraft on the ground and escape with his life. (See sidebar story on Little Jeff’s in-flight fire on page 15).

Little Jeff suffered from severe smoke inhalation, as well as minor first burns. The close call and his injuries saw Little Jeff sit the remaining of the season out. As the 2017 season was coming to a close, who, according to Jeffery “Good Riddance”, the National Hurricane Center issued a Hurricane Watch for Port Mansfield and San Luis Pass, Texas.

The Twin County Air-Ag family could only watch the video feeds, as the hurricane watch was initially discontinued, then re-emerged as a hurricane and storm surge warning at 1500 UTC. It was the middle of the night and there was no time to go to the airport to secure or remove the aircraft. The family watched as long as they could on the security cameras, in pure disbelief, as the storm waters seeped into the hangar. When the power finally was disrupted, they feared that 2017 had put the proverbial nail in the coffin.

On August 31, 2017 the last tropical storm warning was discontinued. The remnants of Hurricane Harvey were nothing more than a few clouds off the coast of Louisiana. All anyone could do was wait for the waters to recede. And recede they did, leaving behind mildew and according to Ashley Leger, “the most God-awful smell you can imagine”, the Legers began their clean-up. It was an emotional return to the airport for Jeffery to see 40+ years of work covered in storm debris, mud and dead crawfish, but a resolve was born that saw the entire operation rebuilt, repaved and rebound.

The first order of business was to establish a temporary office at the home of Adam, Jeffery’s youngest son, and Ashley, Adam’s wife. Here, Ashley ran the day to day operations of Twin County Air-Ag, and coordinated the upcoming season.

Adam Leger, who runs the ground operations division of Twin County Air-Ag, was busy coordinating his ground crew for the clean up and rebuilding of facilities. The operation utilized a John Deere JDR4038 to augment the aerial spraying side before the flooding. Immediately after the hurricane, the ground rig was utilized to move people and resources throughout the city and county where traditional vehicles and boats could not.

Jeffery, Adam and Little Jeff set out to replace the aircraft. A neighbor had leased their 2005 AT-502 for immediate use, and Jeffery decided to purchase the aircraft. In late February of 2018, as the new season was about to begin, The Legers found themselves in desperate need of additional aircraft. They read in AgAir Update two aircraft advertised by Lane Aviation in Rosenberg, Texas, and made the drive to check them out.

Closer inspection of the two aircraft, an AT-602 and AT-502, showed they perfectly fit the bill for replacement aircraft. Little Jeff called the bank on the spot and the two men shook hands with Lane to seal the deal. The Twin County Air-Ag bounce back was in full swing.

The 2018 season began and the operation was very close to a full recovery from a devastating 2017. The first of the season was worked with only one support truck. The first and the last of the five replacement trucks arriving between March and April of 2018. Twin County Air-Ag moved back into their newly renovated office and hangar in March 15, 2018.

Today, Twin County Air-Ag, Inc. is back in full-swing, better than ever. They are operating four turbine Air Tractors, two AT-602s and two AT-502s. Dwayne Williams, who started with Jeffery in 2011, continues to fly for the company. Joel Martin came onboard in 2014 and also is an integral part of the operation. Twin County Air-Ag also has seven vital ground crew members that keep the aircraft flying. The support truck fleet is new and hangar and office space is functional and better than ever. Little Jeff is back in the air, while Adam is busy coordinating ground operations and Ashley is making everything work like it should. The Legers’ fly almost year-round now, from rice fields to pasture work, a bounce-back for sure.