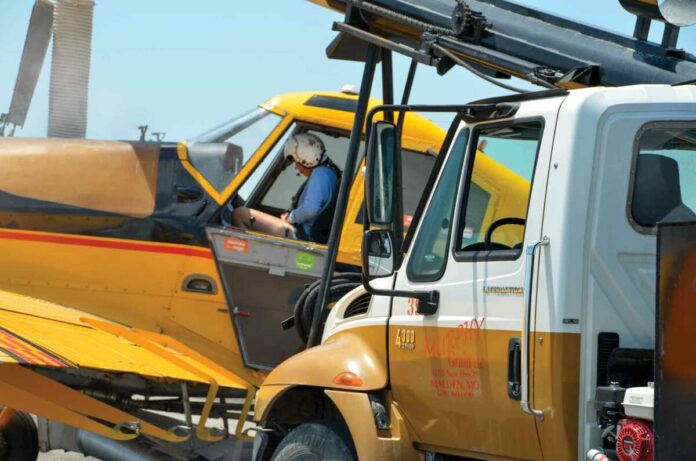 So what do you want to be when you grow up? Pick a major, pick a school or make a decision that many argue a recent high school graduate, destined for college, simply cannot make. Some make it past the college-high school hurdle to find themselves with a brand-new college path and more questions on what to do with it than answers. That quandary was exactly where Kathryn Mitchell, who goes by KayDee, found herself just a short year ago. Attending Southeast Missouri with a focus in AgriBusiness, KayDee knew she wanted to stay in agriculture, but just not sure exactly where.

KayDee was raised on a large cotton and soybean farm, owned by her Uncle, Gary Murphy. Gary was continually having headaches with ground-based applications intermixed with aerial applications – namely staff and availability – to service his 20,000+ acre farm consisting of mostly cotton and soybeans. During a casual conversation, Gary mentioned to KayDee that he needs an airplane that can handle all of his acres. With her interest peaked, KayDee volunteered. The irony, however, is that KayDee had never been in an airplane.

With a newfound direction, KayDee contacted her local flight school for a discovery flight and the rest became history. KayDee left the Missouri-based family farm in July 2018 for Georgia, where she would begin her flight (and eventually ag flight) training.

The training to become an ag pilot took KayDee almost a year, with some delays attributed to Hurricane Michael. She was relentless in obtaining her ratings and securing actual time in a dual-cockpit Thrush. Her Uncle Gary purchased a later model 510G with anticipation of KayDee returning to Missouri. During her training, KayDee was busy forming her business and obtaining her Part 137 Certificate. She had the foresight to partner with an industry veteren as she embarked on her ag aviation journey. KayDee hired Dow Croom to be the primary pilot for her new operation and be her mentor.

While in Georgia, KayDee attended the Thrush Aircraft Factory Pilot Training Program. Terry Humphrey was her instructor for the simulator and emergency procedures portion of the course. KayDee spent many hours in the simulator practicing procedures and familiarizing herself with GPS operations. She also partnered with Matt Peed in his dual-cockpit -34 510P Thrush. He trained KayDee from onset, ensuring she was a careful and safe ag pilot.

As to her training, KayDee commented, “Matt prepared me so well for my first season. We trained in real-life scenarios. When the time came to load my own airplane with fertilizer, it was nothing new or strange. My first day flying ag for myself was just as we had practiced, time and time again.”

When KayDee returned to Missouri, Dow was ready for her to begin working. The 21-year-old had bought Dow’s -34 Thrush to add to her fleet of aircraft, in addition to the 510G. Dow would fly the 510G while KayDee logged her first season in the -34.

Quintin Saayman, who is from South Africa, keeps the airplanes loaded and sequenced during the hectic fertilizing schedules. KayDee is using Chem-Man to help manage her operation, as she is wearing multiple hats flying and running her business.

KayDee jumped directly into ag flying. Her first load was in May of 2019. Every day and almost every load, Dow is with KayDee on the radio and at the loading pad, making sure things are going as planned. As the nature of the business, KayDee’s second load as a full-time ag pilot dealt her a stuck hopper dump gate. Luckily, she kept her cool and relied on the training she had to bring the aircraft back safely, loaded.

KayDee’s first season is going to be mostly dry work. She will spend the next few months becoming intimately familiar with the aircraft and the hours required to do the job. Her business, M Aviation, has a new hangar in the works complete with secured chemical storage and office space. Chemical storage is important when dealing with dangerous substances which is why businesses that do so should be aware of corrosive chemicals examples. Knowing these can help determine what solutions to put in place and what type of storage is most suitable for their needs.

It seems KayDee had no problem deciding what she wanted to do, “when she grew up”.