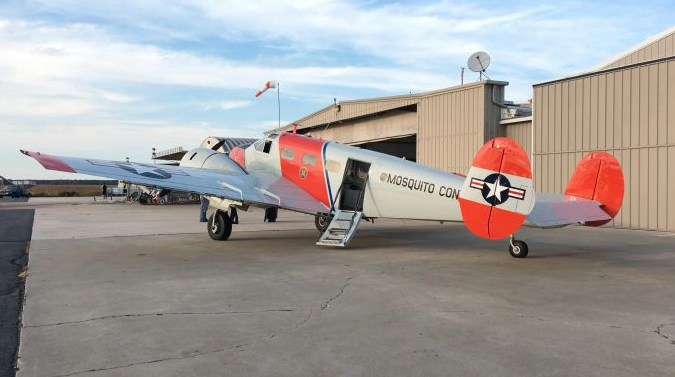 On September 27, 2019, Warbird Digest was invited to fly with Allen Chorman & Son on a mosquito flight over the marshes of central Delaware. While en route to our target area, 41-year-old Jeff Chorman reminisced about how the 75-year-old JRB-4 that has been such an important part of not only his career, but his life.

The Delmarva Peninsula, which is comprised of the states Delaware, Maryland, and Virginia, hence the abbreviation, is located in the Mid-Atlantic region of the United States.  Bordered by the Chesapeake Bay to the west, the Delaware Bay and Atlantic Ocean to the east the peninsula is 170 miles long and varies in width from 70 miles across its central section to just a few thousand feet at its southern tip.  The salt marshes, freshwater wetlands, wet woodlands, and roadside ditches of Delaware are the primary breeding grounds for mosquitoes.  The agency responsible for controlling the mosquito population in Delaware is the Mosquito Control Section of the Department of Natural Resources and Environmental Control’s (DNREC) Division of Fish and Wildlife.

Read more on this story at Warbirds News