HomeCoverFly'n Dutchman Takes to the Air

Fly’n Dutchman Takes to the Air 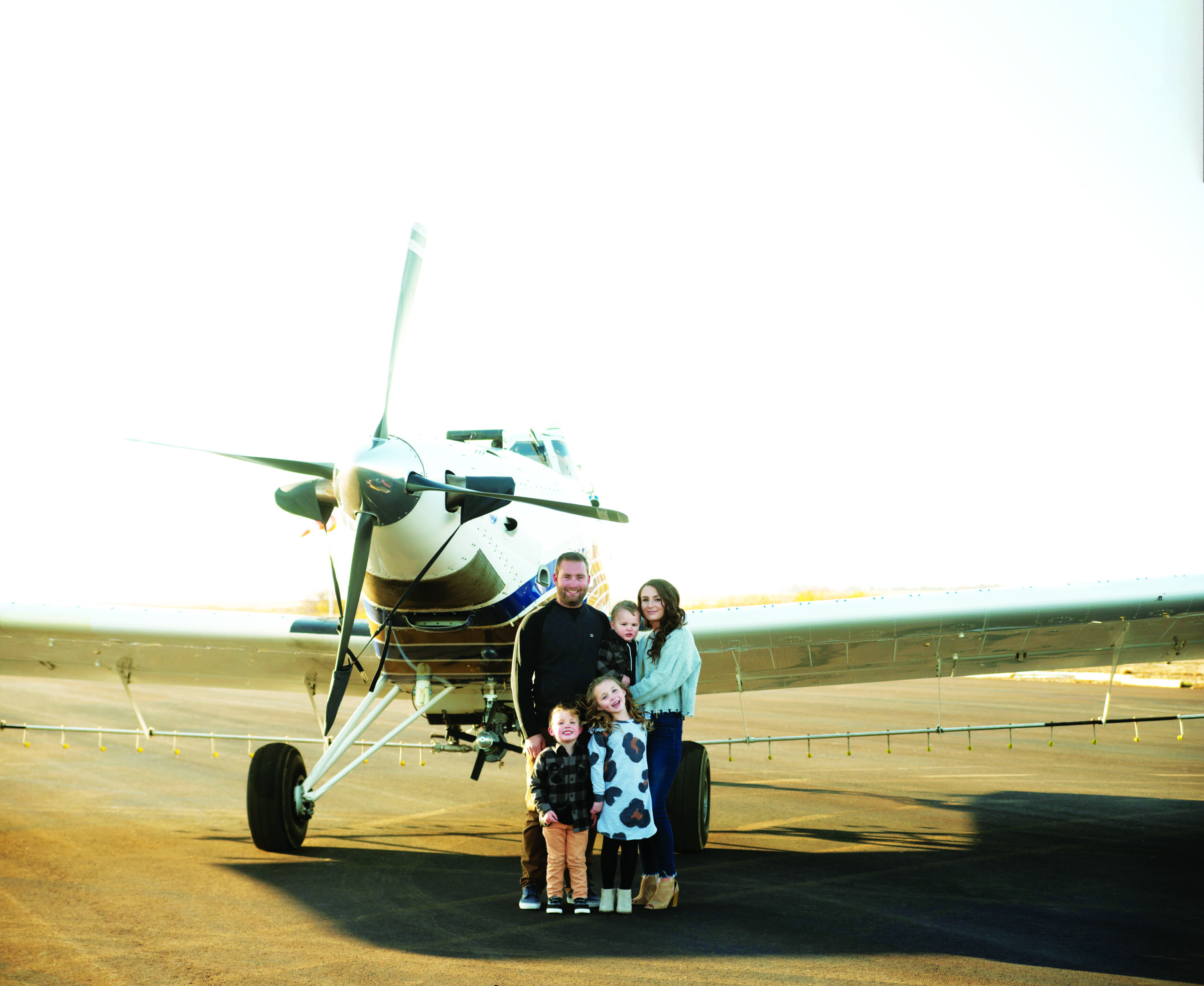 In 2008 Chad Vanderbyl started Fly’n Dutchman Ag Ltd. out of Melfort, Saskatchewan, providing aerial application services for agricultural and forestry needs. The company name is both a tribute to his Dutch ancestry and a reference to the fabled Flying Dutchman ship of naval lore. For Chad, it was the culmination of a childhood dream.

“I remember as a kid looking up at the sky and seeing the planes flying overhead. I always wanted to be a pilot, but I had poor eyesight, so I always thought that there was no way I could ever be a pilot without having 20/20 vision.”

It’s been said that important traits for a successful business include hard work, patience, and persistence. While Chad didn’t give up on becoming a pilot, he realized he needed to find an alternate career.

“I was on the farm and liked working the land and the many facets of agriculture, so I looked around for opportunities to combine farming with aviation. I enrolled in a geophysics program at the University of Saskatchewan. I thought airborne geophysics was where I could combine flying with the study of the land.”

As in many walks of life, timing can also be an essential element.

“While pursuing my studies, I found that laser eye surgery could restore my vision to 20/20 en route to getting a Class I medical. At the same time, I started working on getting a Private Pilot License.”

In the summer, Chad worked as a mixer/loader for various ag aviation operators who would come to fly off the Melfort airport. It was another important step toward him starting his own ag spraying business. During those summers, his interest shifted from continuing his studies to focus on the ag aviation business.

“I kept working on my Commercial Pilot License and started in ag aviation as a Flying Farmer. We bought an Ag Truck, and I went down to Ag Flight in Bainbridge, Georgia, and did the ag training there. After a couple of years, I got an Air Operating Certificate along with an Air Tractor 401.”

While developing a solid client list, Chad also brought aboard his cousin as part of the flying team. As well, the fleet was upgraded to two Thrush 510 H80s.

“When I first started, the focus was on insecticide applications, and in the second year, we added a little bit of fungicide work. Gradually year after year, we made more and more fungicide applications. Then about six or seven years ago, we started desiccating by air. That slowly ramped up to where it’s now a whole new season for us and a good way to end the regular season.” 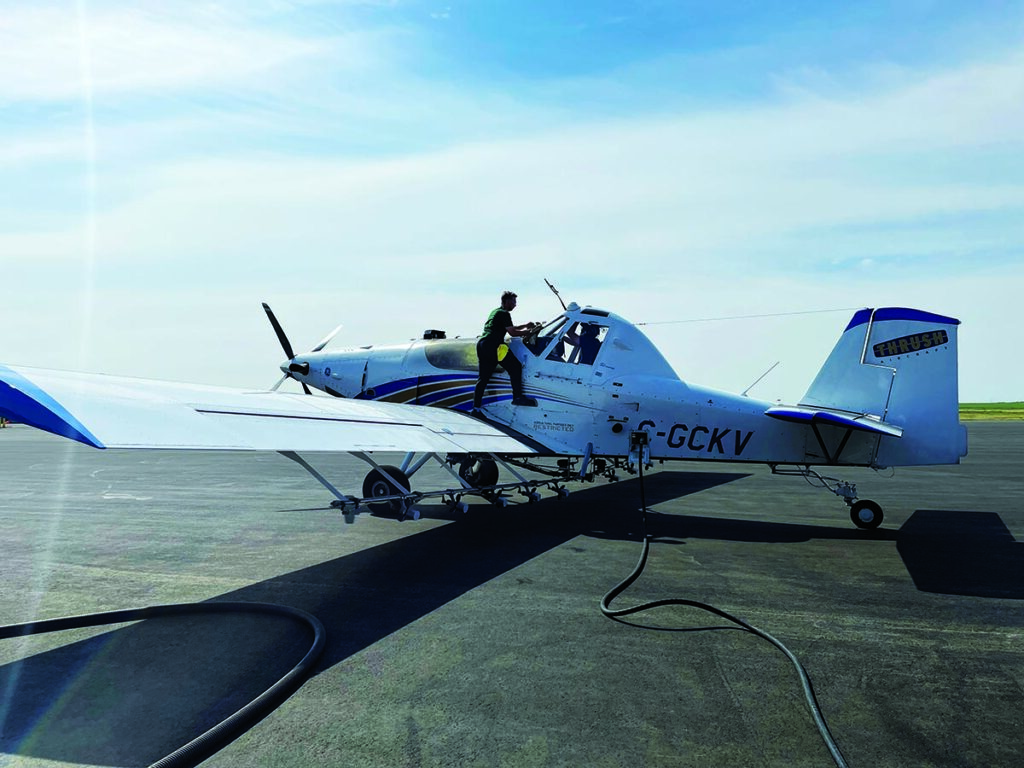 Chad has served on the Canadian Aerial Application Association (CAAA) Board of Directors on various committees over the years and, in 2020, took on the reins as President.

“You quickly learn there’s a lot more going on behind the scenes than appears at first glance. Keeping in touch with the various committees and CAAA members across the country is a major priority for me. In working with Transport Canada, the Pest Management Regulatory Agency (PMRA), and other regulatory bodies, it is critical to keep up to date on what’s going on and what’s coming down the pipe.”

As with any industry, both long-standing and short-term issues must be addressed to keep the ag aviation business thriving. A lot of attention is spent working with government and corporations to find the best solutions that today’s technology can bring to the fore. 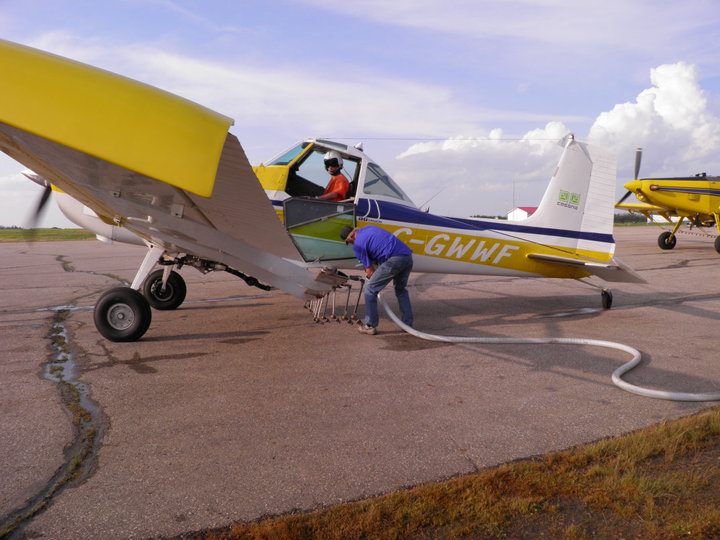 “We are currently working with the PMRA on compliance with the water volumes designated on labels. Part of that process is working with registrants to encourage them to evaluate their labels as they were developed years ago under what appears to be some archaic tools. Agricultural aviation is continuing to grow. We are becoming less 911 and used more as another tool in the producer’s toolbox, given the aircraft’s speed as timing is now everything in agriculture. Crop prices are increasing, but so are the fuel, fertilizer, and other input costs. We have to bring cost savings to the farmers to help them be more cost-effective in their operations.”

In any business associated with aviation, it is critical that the channels of communication with Transport Canada remain open and active. On behalf of its members, the CAAA continues to work with Transport in seeking solutions to a continuing evolution in the regulatory landscape.

One example has to do with lightweight data recorders (LDRs). On December 20, 2021, Transport Canada issued a Notice of Proposed Amendment (NPA) to amend subpart 605 of the Canadian Aviation Regulations (CARs) to require (1) retrofitting of existing aircraft for the installation of LDRs and (2) the mandatory incorporation of LDRs into new aircraft.

“The issue is not as straightforward as first appears. What we are talking about here is not simply adding a single piece of hardware to the aircraft. It involves a lengthy design, certification, production, and installation process. If Transport mandates the LDRs, all these costs will get passed to the operator, which will be significant. We are asking if LDRs are needed in our ag-air industry for accident investigations. Our aircraft are still stick and rudder; they are not overly complex flying machines. It’s very rare not to be able to determine what factors were involved in most circumstances.” 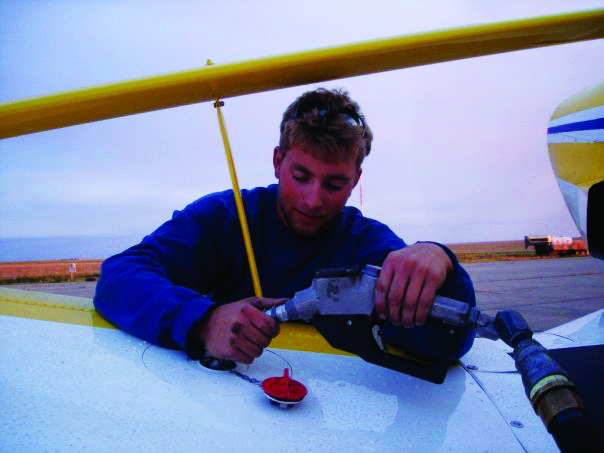 The aerial application industry also continues to emphasize continual improvements in overall safety and application efficacy. From annual spray pattern testing clinics to new emerging technologies, there is a continuing evolution in studying the dynamics of aerial application to achieve the very best results possible.

“Every year, we continue to seek ways to ensure our applications are conducted safely and effectively. An important part of that process is constantly monitoring and evaluating our application systems. We run both CP nozzles and atomizers, atomizers for fungicides and insecticides, and CPs when we get into herbicide applications. We used to run atomizers year-round with my Thrush that had winglets, and we never had an issue. As soon as we started flying the H80, which didn’t have winglets, we were getting spray on the windscreen. We moved nozzles around and narrowed our swath width to keep our spray out of the wingtip vortices.”

“It’s what most new ground sprayers are running now, and I think we should explore PWM systems for our aircraft, especially for as much herbicide as we’re doing now. Also, a 50% boom shutoff works well for drift mitigation. It’s an emerging technology that looks pretty good and can help stay on target with products.”

It’s hard to look anywhere these days without coming up with a news article or advertisement on drones. Part of the discussion involves looking at ways that they can be used as an additional tool in the monitoring of crops and treatment of pests.

“To use drones for any broad acre amount of spraying is something I don’t see happening real soon. Just considering new regulations that must be in place means it will take a while to get caught up in that department. Then add to that the studies required to include drones on labels. I can see value in drones where they could be used for crop monitoring and evaluation, or even doing some spot spraying, but again there are a lot of bridges to cross before that becomes mainstream.”

For many operators, family members form an integral part of the team.

“My wife Kendra is an essential part of the business. She does all the books and billings, brings three meals a day for everybody working here, and helps us get organized in the mornings or the evenings as to which aircraft is going where and when. We’ve got three young kids who like coming to the strip when she brings meals, which is the only way I get to see them in the summer because I’m gone at four and not back ’til ten.”

An often-overlooked part of the aerial application business is finding partners to work within continuing studies of various aspects of the business.

“One new development we are looking forward to is working with the University of Saskatchewan. Recently we presented the ag air industry to a class of ag engineers, and then we had a tour of the U of S. Then we had an opportunity to meet some engineering professors. It was exciting in that we could see working with them on a range of projects, maybe starting with drift mitigation studies or water volume studies. Hopefully, it leads to something down the road.” 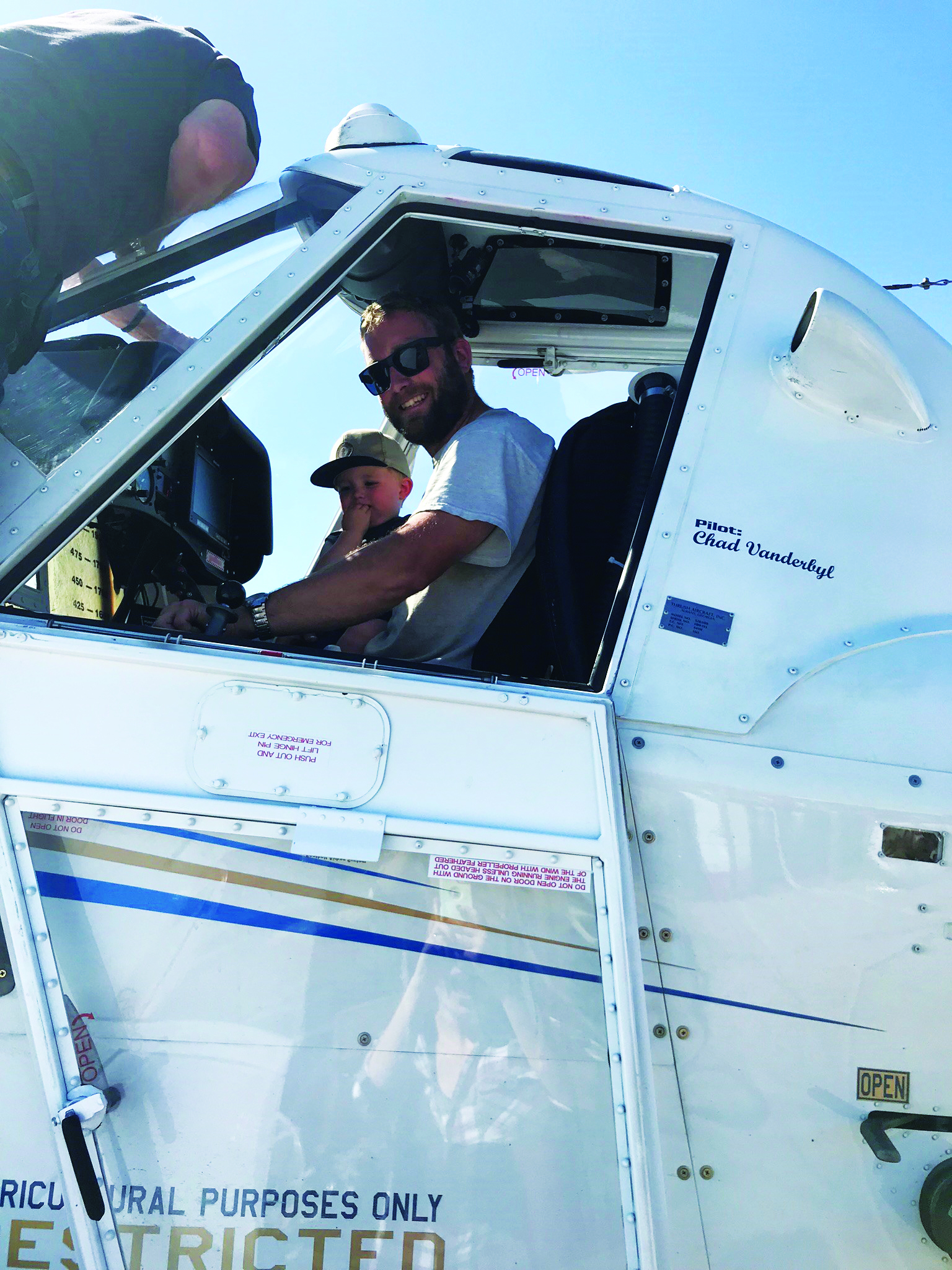 As in every business, consumers must be educated on products and services and the value they can bring.

“There are still a number of myths about aerial application, but I am in the unique position of being a commercial ag air operator and a farmer. If, as a farmer, I have invested in all this training and equipment and aerial spray my fields, it proves that aerial application works and works very effectively since I’ve continued to grow our business.”

In looking ahead to the 2022 spray season, Chad is very optimistic about the continuing growth of Fly’n Dutchman Ag and the entire ag aviation industry.

“I try to do the best job I can for our farmers and run my business and my airplanes with the idea that if this were my field, would I be happy with the job that’s getting done right now? I know that our members feel the same way, and I’m looking forward to working with them as CAAA President in our continuing efforts to improve what we do and how we do it.” 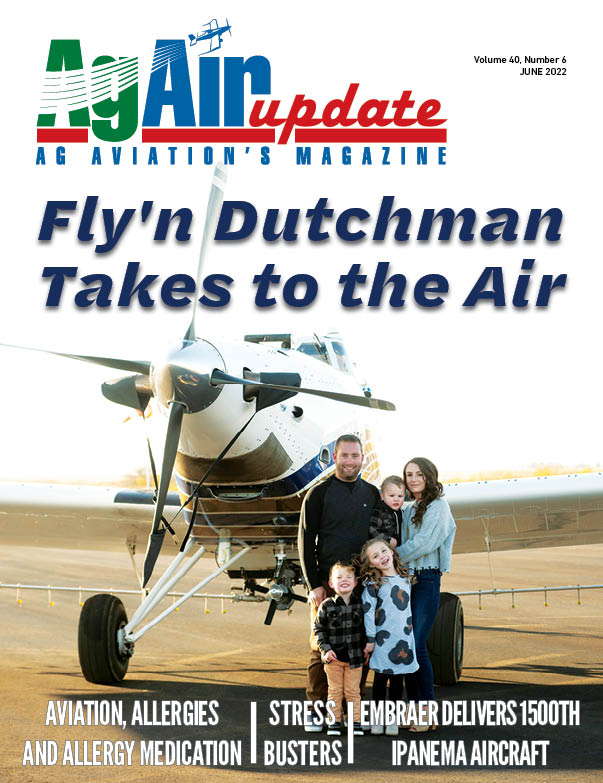