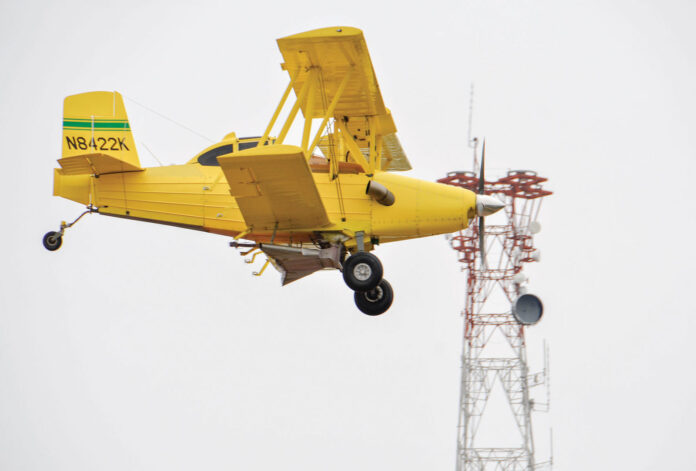 ALEXANDRIA, VA – May 22, 2019 – Seven years after the National Agricultural Aviation Association (NAAA) conducted its last comprehensive industry survey, new insights about the U.S. aerial application industry have emerged thanks to a landmark survey of Part 137 operators and pilots conducting agricultural operations. The 2019 NAAA Aerial Application Industry Survey confirms aerial application is as vital to modern agriculture as it has ever been—and the industry’s footprint is expanding. From 2012 when NAAA’s last industry survey was released to 2019, consider these growth factors: The number of agricultural aviation operations has grown 16% since 2012. Along with more operations, the number of hired pilots is up 42%. The average number of aircraft per operation is up nearly 10%. Based on those increases NAAA estimates the agricultural aviation industry treats an estimated 127 million acres of cropland aerially annually. According to the 2017 USDA Census of Agriculture, there are 347 million acres of cropland used for crop production in the U.S. Considering some crops are treated more than once during a season, aerial application treats an estimated 28% of this cropland. The results of the 2019 Aerial Application Industry Survey are documented in separate operator and pilot reports, available exclusively to NAAA members at AgAviation.org/naaaindustrysurveys.

NAAA surveyed member and non-member Part 137 operators and pilots from Jan. 26 to April 29, 2018, to gather data about the demographics, standard practices, equipment, crops and acres treated, risk perceptions, and health and safety of operators and pilots working in the aerial application industry. Comparisons with data from prior surveys were made to identify trends. Another purpose was to gather information about the aerial application of crop protection products and other crop inputs and provide such data to the EPA and crop protection product manufacturers to aid in registration and reregistration, thereby increasing the availability of those products to the aerial application industry.The survey was administered on NAAA’s behalf by survey scientist Tim Struttmann and supported by the Southwest Center for Agricultural Health, Injury Prevention, and Education in Tyler, Texas. A total of 550 operators and 305 pilots responded to the web-based survey, which was modeled after a similar web-based survey in 2012 and paper-based surveys in 1992, 1994, 1998 and 2004. The 35% response rate among operators is very high compared to other surveys among similar target audiences. The pilot results closely correspond to the operator results, suggesting that the reliability of both surveys is high.Some of the key findings from the 2019 NAAA Aerial Application Industry Survey are as follows. (When comparisons to the 2012 industry survey are made, data in the 2012 and 2019 NAAA surveys are based on aerial application work in the 2010 and 2017 seasons, respectively.)

Demographics: Conventional wisdom views agricultural aviation as an aging industry, but to say aerial applicators aren’t getting any younger would be inaccurate. In truth, while operators are, on average, two years older than they were in NAAA’s 2012 survey (55 now versus 53 then), the population of owner/operators under 40 grew from 11% in 2012 to 15% in 2019. Employee pilots are younger today, too. Pilot respondents were 47.4, on average, two and a half years younger than in 2012 when their average age was 49.9. The largest cohort of hired pilots (25%) was in the 30–39 age bracket in the 2019 survey. Furthermore, the population among all hired pilots under 40 grew to 39%, up from 26% in 2012.

Geography: Although operator participants in the 2019 NAAA industry survey were headquartered in 42 states, according to NAAA’s records, aerial application operators are based in 45 states and aerial applications are conducted in all 50 states. The top five states for aerial application business headquarters among the operator respondents were: 1) Texas, 2) Minnesota, 3) Arkansas, 4) Louisiana and 5) California and Nebraska (tied).Forty-one percent of the 2019 operator respondents are headquartered in the Midwest, 38% are in the South, 19% are in the Far West and 2% are based in the East.The majority of operators conduct business in two or more states. States where the greatest number of operators reported performing applications were Minnesota (16.1%), Illinois (14.6%), Iowa (14.6%), Kansas (14.4%), Texas (14.1%), Nebraska (13.3%) and Arkansas (11.6%).

Equipment and Standard Practices: During normal day-to-day operations, operators have an average of 2.17 pilots and 2.3 aircraft per operation. That’s up 9.5% from the 2.1 aircraft per operation reported in the 2012 survey. Fixed-wing aircraft account for 84% of the fleet, and helicopters make up 16%. That’s a slight change from the 2012 survey when the proportion of fixed-wing aircraft and helicopters was 87% and 13%, respectively. Seventy-one percent of helicopters are turbine powered and 83% of the fixed-wing aircraft are turbine powered. The 2019 NAAA Aerial Application Industry Survey also highlights the technological advances that have continued to mount over the past seven years. GPS, which allows for the precise application of pesticides, seeds and fertilizer, has been adopted nearly universally. Ninety-nine percent of operators use a GPS device for swath guidance, according to the 2019 operator survey. Eighty-one percent of their aircraft are equipped with smokers to determine wind direction and estimate wind speed. Sixty-four percent of ag aircraft have liquid flow control equipment and 30% have dry flow control equipment. Liquid and dry flow control equipment can be used to make precision constant rate and variable rate applications.

Table 2 compares equipment documented in the 2019 and 2012 surveys.

The three leading methods aerial applicators use to control spray drift are drift control additives (used by 90% of operators), buffer zones (90%) and smokers to monitor wind speed and direction (88%). In addition, 75 percent of operators modify droplet size by changing the nozzle orifice size, and 64 percent change their flight patterns. On average, operators use a combination of eight different drift control methods to improve efficacy and minimize spray drift.

Crop Treatment: Corn, small grains such as wheat and barley, soybeans, pastures and rangeland, and alfalfa were the five most common crops treated during the 2017 season, in that order. When asked to estimate the usual and maximum number acres treated in a single day with a single aircraft for a variety of crops, the highest averages in terms of the usual number of acres a single aircraft treats in a day were applications to corn (1,165 acres), forests (1,149 acres), soybeans (1,143 acres), cotton (1,125 acres) and rice (1,033 acres). The top five crops in terms of the highest maximum acres treated in a single day using a single aircraft were forests (2,159 maximum acres), cotton (2,119 max acres), soybeans (1,958 max acres), corn (1,925 max acres) and rice (1,579 max acres). In most instances, the average acres treated per day among 12 crop categories were higher in NAAA’s 2019 industry survey than in its 2012 survey.

Risk: Operators and pilots view power lines, communication towers and meteorological evaluation towers (METs) as the top three occupational hazards. The number of operators that have encountered towers while making applications validates aerial applicators’ risk perceptions about towers. Fifty-nine percent of operators in the 2019 survey encountered an unmarked communications tower while spraying, and 52% encountered a wind turbine or unmarked meteorological tower. Meanwhile, 15% of operators reported encountering a drone while making an aerial application.

Workload: Nearly 70% of aerial application companies conduct flight operations more than 100 days a year. Forty-three percent of operators flew between 100 and 200 days in 2017, 25% flew more than 200 days, 24% flew 50 to 100 days, and 7% flew fewer than 50 days during the 2017 season. More than half of operators (55%) work 8 to 12 hours per day in season, and more than a third (35%) reported working an average of 13 to 16 hours per day during the application season. Pilot responses were almost identical.”With our growing industry numbers, expanding embrace of environmental protection technologies and techniques, and an infusion of younger operators and pilots, NAAA’s new aerial application industry ‘census’ shows that the aerial application industry is well-positioned to support America’s farmers now and in the future,” NAAA Executive Director Andrew Moore said. The full reports on the 2019 NAAA Aerial Application Industry Survey are available at AgAviation.org/naaaindustrysurveys, but you must be an NAAA member to download them.
###