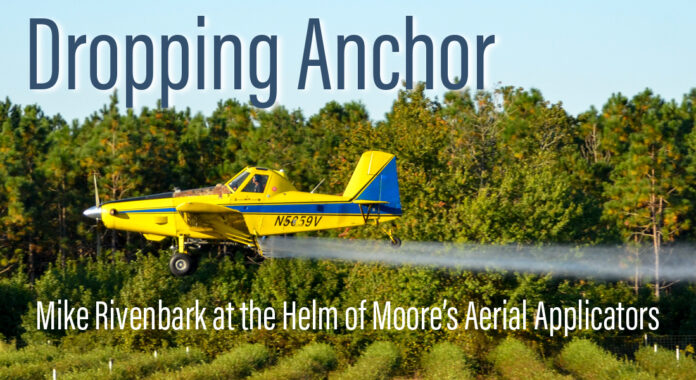 Sometimes, things are just meant to be. Such is the case with Mike Rivenbark, owner and pilot of Moore’s Aerial Applicators in Clinton, North Carolina. Mike wasn’t always an ag-pilot. In fact, he wasn’t born into ag aviation; or aviation in general. Raised in the Southern Outer Banks of North Carolina, Mike’s destiny was always going to be, seemingly, large spans of open ocean and fishing boats. Holding a 100-ton Masters Captain License, Mike spent his days on 60-plus foot sport fishing boats along the Eastern seaboard and into the Caribbean. Mike managed and captained the vessels and delivered new ones. This sea-faring lifestyle took an unexpected turn in 2007 when Mike had a regularly scheduled Central American trip for the winter cancel. He decided he wanted to get his pilot’s license. This decision wasn’t that Mike was looking for another career, just something he wanted to do for fun. After all, what goes better with boats than airplanes?

Mike completed his Private Pilot’s license in a little under six weeks. Back on the boat, a friend and mate would change the course of Mike Rivenbark’s professional career forever. Henry Moore, III was the son of Henry Moore Jr, both of whom were from the Clinton, North Carolina area. The elder Moore started Moore’s Aerial Applicators in the mid-1960s with Piper Cubs, Ag Cats and Weatherlys, eventually moving to the PT6A-34AG-powered AT-402. His son, Henry III, had decided to work alongside Mike on the sportfishing boats for a couple of seasons. It was there that Henry III convinced Mike that aerial application was a career move that he wanted to make. Mike, open to suggestions, visited with the Moores at their operation on the Clinton-Sampson County airport. Mr. Moore liked what he saw and offered Mike a job loading airplanes with a promise of a pilot’s seat once Mike obtained his necessary ratings and ag-specific pilot training.

Mike wasted no time and in 2010 enrolled in Ag-Flight, Inc. located in Bainbridge, GA. There, he finished his instrument training, obtained his Commercial Pilot’s Certificate, and began training to become an ag-pilot. Mike graduated from Ag-Flight in April of 2010 and returned to Clinton, North Carolina to start learning the business – from the ground up.

After the first season of loading airplanes, Mike took the controls of Moore’s Aerial Applicators’ Weatherly 620B. Mike learned the ropes of precision applications, safety and the idiosyncrasies of actual ag flying over the next year until another opportunity presented itself to better learn the ag flying business and get more hours during the season. Lukas Johnson, an instructor and friend from Ag-Flight, introduced Mike to Rick and Mary Boardman from Henderson, Nebraska. The introduction would turn into a mentorship and a life-long friendship.

Mike started with the Boardmans in 2011 in a 300 Brave. From 2011-2016, he continued treating mainly corn with the Brave and eventually moving, with Rick’s guidance, into an AT-502B in 2014. The Nebraska seat offered MIke lots of learning opportunities and a great operation to work for. However, it still wasn’t home. Possible mergers between operations in Nebraska and Henry Moore contacting Mike about the possibility of him buying the flying service, opened the door for Mike to make the move back to his family on the East Coast. It was bittersweet to be moving from the Boardmans, but the signs all pointed eastward.

Mike Rivenbark purchased Moore’s Aerial Applicators in 2017. He kept the company’s AT-402B, which he still operates. Mike was also able to purchase the Weatherly that began his ag-flying career and utilizes that aircraft as a back-up to the Air Tractor. His season begins in February and comes to a close during the middle of October with a final insecticide treatment on blueberries. Blueberries and blackberries are the predominant crop in this southeastern area of North Carolina. Aerial applications are the preferred method with low-volume to combat the maggot fly. The fly will penetrate the berry and deposit larvae, which will then lead to maggots inside the berry. To combat this, multiple applications of malathion are applied. Mike’s aircraft are set up with 73 nozzles, a range of CP-3 and CP-9s. This allows him to easily go from low-volume to high-volume applications, sometimes in excess of 10 gal/acre. No dry applications are made.

Mike graduated from  NAAA’s Leadership Training program in 2014 and currently serves as the Treasurer for the National Agricultural Aviation Association. He and his wife, Tiffany, are regular faces at the NAAA Ag Aviation Expo and the NAAA/NAAREF Board Meetings. Both are advocates for the industry. In 2013, Mike received the John Robert Horne Memorial Award given to beginning (less than 5 years) agricultural aviation pilots for exemplary safety records. Tiffany Rivenbark, in addition to managing the operation’s office and accounting, also serves as the Support Committee Chair. Mike and Tiffany have a daughter, Anna Keith (AK) who is three. Through many nights away from home, both on the boat and in Nebraska, from the helm of a sportfish to the helm of a thriving aerial application business, Mike Rivenbark has finally found the right place and trade to drop his anchor.