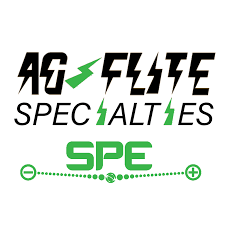 For low volume application (1-2 gallons per acre) having the most even coverage of the plant target.

Take charge with your favorite spray tips, 80- and 40-degree flat fans or disc/core with the power of electrostatics. Various independent research studies by USDA ARS Aerial Application Research Center at College Station, Texas demonstrate that electrostatic charged droplets produce positive results. The new nozzle body has excellent insulation qualities and easily replaceable electrodes for the different spray tips. Now at one to five gallons or more per acre you can improve coverage and reduce drift by adding a charge to the droplets in the spray cloud. The smaller the droplet the

greater the charge the greater the attraction to the plant canopy. How it works: The aircraft is equipped with two small control boxes drawing less than five amps total. One induces a positive charge on the right side of the aircraft and the other induces a negative charge on the left side with up to 10,000 volts on spray droplets without changing the chemistry of the product being applied. Why positive and negative? In order for the droplets to be charged, they have to be released from a neutral body (which is the aircraft). If it was a positive charge only, the whole aircraft would be positively charged so the spray droplets would not be charged by the electrode. By adding the negative charge, the aircraft then becomes neutral. Both positive and negative charged droplets are then attracted to the earth which is a neutral body. The plants are grounded to the earth so they attract the droplets first. There is also a Coriolis wrap-around effect that places a number of small

droplets on, around, and under the leaves. Another benefit is that droplets with the same charge repel each other so there is less coalesce of smaller droplets joining two together to make larger ones in flight and also fewer droplets stacking on top of one another on the leaf surface, greatly improving the area covered.

It Just Makes “Plane Sense” to Train in an “Ag Plane”