Home-NAAAAmerica’s Aerial Applicators Are on Call and Ready for Duty to... 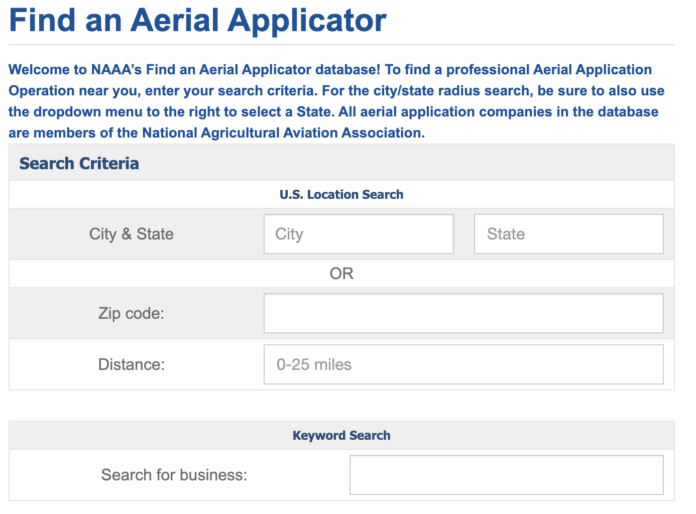 After a productive 2021 spraying season, the National Agricultural Aviation Association (NAAA) expects demand for aerial application services to be even greater this summer as farmers strive to protect their crops from yield-robbing weeds, disease and insect pests in an effort to bolster the global food supply.

NAAA conducted an industry survey toward the end of the 2021 spraying season. It found that 4 out of 5 aerial applicators flew the same or more hours and treated the same or more acres than they did in 2020, including 57% that treated more acres and 54% that flew more hours than the year before. Several signs point to aerial applicators being even busier this summer. Leading pesticide manufacturers recently informed NAAA that they believe fungicide applications could be 20% higher than in 2021 when 55 million acres of plant health products were sprayed. Furthermore, even with tight supplies and higher input costs, farmers will be counting on aerial applicators to help them maximize their crop output while commodity prices remain high.

Data from a Texas A&M University economics study calculated that the aerial application industry’s value to farmers, input suppliers, processors and agricultural transportation and storage industries for corn, wheat, cotton, soybeans and rice production alone in the U.S. is about $37 billion annually. That figure is expected to grow substantially and in importance as food prices increase and food production becomes an issue of growing importance due to the Russian invasion of Ukraine, supply and demand issues, and a growing global population.

“With everything going on in the world, including food supply issues, aerial application is going to be vital this year,” NAAA CEO Andrew Moore said. “Because aerial applicators will be in such high demand, NAAA strongly advises farmers to schedule work with them in advance whenever possible.”

America’s aerial applicators are ready to assist farmers with timely applications. NAAA’s “Find an Aerial Applicator” database helps farmers find them. The search tool is especially handy for farmers that don’t already have an existing service relationship with an aerial application operation. At AgAviation.org/findapplicator, users can conduct a radius search by city/state or zip code for distances ranging from zero to 25 miles away up to 250 miles away. All aerial application companies in the database are members of the National Agricultural Aviation Association and must abide by NAAA’s Member Code of Conduct to operate in a manner that reflects the professionalism and ethical nature of the aerial application industry.

Farmers, ranchers, foresters, agricultural co-ops and crop advisors are encouraged to visit AgAviation.org/findapplicator to find an aerial applicator near them.

Support the NAAA with a Live or Silent Auction Donation