Meeting the needs in the Cayman Islands 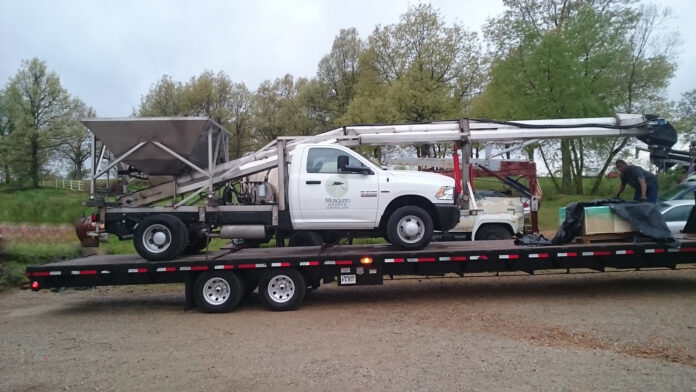 At Auger Dan we try to meet the needs of aerial applications in the dry material loading equipment. Over time, equipment has needed to evolve to meet loading requirements. These improvements led to scales, clear and adjustable height sock, anti-dribble valve (to stop spillage in sensitive loading areas), extensive truck modifications, etc. Recently, Auger Dan responded to a request to develop a belt loader system.

I was approached at the NAAA convention about building a belt conveyor truck for loading a dry granular product for mosquito control in the Cayman Islands. The Cayman Island government operates two 550 Thrushes that apply the product as directed by their Mosquito Control Department.

Jeff Marshall, Maintenance and Engineering Manager for Mosquito Research and Control Unit (MRCU) for the Cayman Island Government, had requirements he wanted to meet for a belt loader. These requirements included a new chassis, belt loader, scales, a 3000 lbs. minimum capacity hopper and a lump breaker in the hopper. This system needed to be able to ship in a container.
The plan was to build a straight tube belt loader similar to previous units and put it on a truck chassis. The final unit would look similar to a baggage loader seen at airports. The operator of the belt system would be in the open.

The second problem was once the new Dodge cab and chassis arrived at the shop and photographs sent to the customer, the response from upper management at the MRCU was, “Don’t cut the cab off of the new truck!” The only answer to the problem was to redesign the entire system.

After consulting with the belt supplier about how to pivot the belt tube or fold it, I was advised by using a completely different type of belt, it could be done. Folding the tube down like a shot gun, the tube can be placed back in the load position without the need to readjust the belt.

The final belt loading unit was 95.5 inches tall and 35 feet long when lowered. The hopper will hold approximately 5,000 pounds. The unit has scales and a hydraulic powered lump breaker with a speed control of motor RPM. The unit controls are built into the truck dash.

I have included photos of the unit and the system working in the Cayman Islands. A link to the YouTube video is https://www.youtube.com/watch?v=KIi9sRpwbvw. If you have any questions feel free to call me at 870-919-2317.