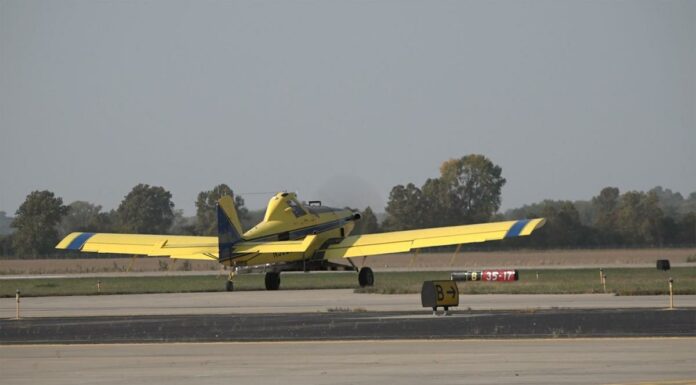 It may seem like a profession from another era, but crop dusting remains an important job in 2020.

“The newer pilots, well they call themselves agricultural aerial applicators and most people say, ‘Huh?’ So, crop dusters, they understand that,” said Floyd McElwain, founder of McElwain Sprayers where he works with his son, Russell.

Beginning in the 1920s, planes dropped insecticides on farms. Today they drop seeds and fungicide as a sort of “911” service for farmers.

The operation is pretty sophisticated. It took a crew of four – two pilots and two loaders – to prepare the payloads for a farm in Hemple, Missouri, earlier this month

The pilots took off and landed at Rosecrans Memorial Airport around 18 times so they could get additional wheat seed, fuel and give a News-Press NOW reporter directions to the farm.

A compartment in front of the plane holds either 4,000 pounds of seed or 500 gallons of liquid.

When they arrive at the field, pilots fly about 60 feet overhead so the seeder located underneath the plane can dish out a swath width of 70 feet on a single pass.

In Northwest Missouri, the most popular crops planted are corn and soybean, according to Wayne Flanary, a field specialist in agronomy at the University of Missouri Extension located in Buchanan County.

“It might be white corn, yellow corn, in Atchison County we have popcorn, and so there are specialty types of corn that we have in Northwest Missouri,” Flanary said.

Read more on this story at NewsPress