Home-International2020 - A Year in Review 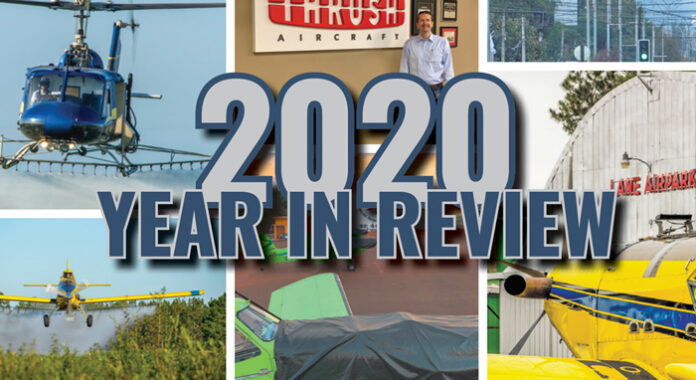 2020 has, by all accounts, been one of the strangest years on record. Regardless of the sometimes absurd 24/7 news cycle, a global pandemic and a highly-charged U.S. presidential election, AgAir Update brought you features every month on the essential business of agricultural aviation. Traditionally, December is a month where we look back at the previous 11 months of feature articles for the year. To read the individual and complete articles, follow the link provided or use your smartphone to scan the QR code.

In January of 2020, we made an exception to our reminiscing article usually reserved for December. The January edition took stock of everything that happened in 2019, including a first-ever NAAA Ag Aviation Expo held in November. Read the full article here: https://www.agairupdate.com/looking-back-on-2019/

The February 2020 edition featured Target Airspray and was written by a new writer to the pages of AgAir Update, Ted Delanghe. Ted traveled to Canadian operator Darren Tiede’s operation just east of Calgary, Alberta. Target Airspray was started in the mid-1960s by Darren’s dad, Ralph. Today, Darren operates three Thrush 510Ps and serves as the president of the Canadian Aerial Applicators Association since 2019. Read the full article here: https://www.agairupdate.com/on-target/

The Mach 2020 edition of AgAir Update celebrated women in the aerial application industry. March is traditionally women in aviation month, and AgAir Update took that a step further and celebrated the dedicated female pilots in ag aviation. Read the full article here: https://www.agairupdate.com/march-celebrates-women-in-ag-aviation/

April 2020 highlighted Lane Aviation, a long-standing and well-known business in the ag aviation world. Lane Aviation is celebrating its 75th year anniversary in 2020. Started by George Lane at the conclusion of the second World War, the company is now owned and operated by his son, Grant. Lane Aviation has 14 employees, including third-generation Logan Lane, at their Rosenberg, Texas location with customers from all over the globe. Read the full article here: https://www.agairupdate.com/past-present-and-future-lane-aviation-marks-75-year-milestone/

In the year of the Coronavirus, an operator in Chile, Aero Santa Cruz Fumigaciones Aéreas, owned and operated by Víctor Gonzáles, at 7 a.m. on  Easter Sunday 2020, made the country’s first aerial application for the treatment of coronavirus. In a WhatsApp interview with Víctor, AgAir Update was told the details of the application. Aero Santa Cruz has been featured on two occasions in AgAir Update in the past 23 years. With all permissions in place from local authorities, Aero Santa Cruz’s AT-402B was loaded with 1,500 liters of water (396 gal) that included 10 liters (2.64 gal) of BioClean in the mix. No adjuvants were used. The application rate was set at 30 l/ha (3 gal/ac) using a 40-meter (131-foot) swath. The ambient temperature was 12°C (54°F) and 76% humidity. Twelve applications were completed by 10:30 a.m. A total of 600 hectares (1,482 acres) were treated. Víctor said Aero Santa Cruz did not receive any complaints. Actually, Santa Cruz citizens were standing in the streets waving white clothes as a symbol of “Thank You”. Many people called Víctor to congratulate and thank him. He became the town hero. Other Chilean cities have been calling inquiring about a similar application. Read the full article here: https://www.agairupdate.com/covid-19-treatment-by-air-in-chile/

AgAir Update had the opportunity to visit with Mark McDonald and Clint Hubbard, two of the new owners of Thrush Aircraft, LLC in Albany, Georgia in May of 2020. After Thrush Aircraft, Inc. went into Chapter 11, a new company emerged as Thrush Aircraft, LLC with new owners, new leadership and a renewed vision for its product line in both the agricultural aviation and the firefighting industry. The company is no stranger to reorganization. Originally Ayres Corporation, founded in the 1970s by Fred Ayres, a spin-off from Rockwell International, Ayres Corporation was responsible for the S2R type aircraft, which is the Type Certification for all modern-day Thrush aircraft. In 2003, Thrush Aircraft, Inc. was formed from Ayres Corporation and enjoyed a bountiful run introducing new product/engine combinations until several decisions led the company to being forced to seek new ownership. The leaders at Thrush Aircraft, LLC have an optimistic and systematic approach to bringing the brand back into the mainstream with emphasis on customer and product support like never before.  Read the full article here: https://www.agairupdate.com/thrush-aircraft-re-emerges/

What does a Brazilian ag operator do, who has more than forty-five years of ag-flying experience, when he looks out his office window and sees an impressive line-up of 13 Ipanemas? His experience in business tells him the Ipanemas have served him well. However, maybe he asks, “Is there another ag-aircraft option that may work well with the Ipanema fleet?” Aviação Agricola Alagoana, Ltda was founded in 1976. In 1979, it was bought out by husband and wife team, Gregory and Deta Smith. Based in Rio Largo, Alagoas, a northeastern state in Brazil near the coast (Maceio), Alagoana decided in 2019 that it was time to expand its horizons with the purchase of a new AT-402B from AeroGlobo Aeronaves based in Botucatu, SP, a Lane Aviation Air Tractor representative. Read the full article here: https://www.agairupdate.com/expanding-the-fleet-expanding-the-horizon/

The Eastern Plains of Colorado, divided by the South Platte River and Arkansas River valleys and backdropped by the Rocky Mountains, is one of the more scenic places in the United States. At an average elevation of almost a mile, the density altitude climbs rapidly in the summer. The “high” and “hot” adage, however, is routine for Air Dusters, Inc., a third-generation operation in the small town of Roggen, about 40 miles northeast of Denver. The August 2020 edition featured the Schellenberg family. Air Dusters, Inc was started by Dan Schellenberg’s dad, Carl. Today, Dan and Jason Schellenberg operate high and hot on a regular basis. Read the full article here: https://www.agairupdate.com/operating-high-and-hot/

The September 2020 edition spotlights Reg Michaud Aviation, LLC. Originally started in the 1940s by Frank Michaud, his son Reg Michaud grew the business until Reg’s passing in 2013. In 2019, Taylor and Nathan Michaud assumed ownership of the business and started Reg Michaud Aviation, LLC in tribute to their dad. Currently, Reg Michaud Aviation, LLC operates one AT-602, one dual-cockpit AT-802, two UH-1s and one Bell 47. One of Grandfather Frank MIchaud’s original G-164s is still a part of the operation, but used in a very minimal role. The company’s aircraft make up an arsenal of tools that are only used by the two brother pilots. Depending on workload and a variety of seasons, they may use the helicopters in the morning and transition into the airplanes that same afternoon. Read the full article here: https://www.agairupdate.com/the-right-tools/

The October 2020 edition saw the debut of new AgAir Update writer Grant Boyd. Grant interviewed Ken Bixenman of Great Plains Spraying in Colby, Kansas. Great Plains Spraying was started in 1976 by Ken Bixenman, who grew up about a half-hour from Colby in the Grinnell/Grainfield area. Being a third-generation farmer, agriculture runs deep in his family’s lineage and farming is something he continues to do when not spraying other farmer’s fields. He and his brothers, Ron and Daryl, currently share equipment while tending to their own  shared wheat and corn fields, as well as several small feedlots. Great Plains Spraying is the only Colby-based agricultural aviation outfit and operates three 510 Thrush solely from Colby Municipal Airport (CBK). The three aircraft primarily spray in Thomas County, but also service the surrounding counties of Sherman, Cheyenne, Rawlins, Decatur, Sheridan, Gove, Logan and Wallace. Annually, they spray an average of about 120,000 acres, which consists of corn (40%), wheat (30%), pastureland and lots (15%), with the remainder coming from beans, milo and sunflowers. Of this, roughly 30% is herbicide, 40% is fungicide, and the rest are insecticides. Read the full article here: https://www.agairupdate.com/great-plains-spraying-inc-colby-ks/

Sometimes things are just meant to be. Such is the case with Mike Rivenbark, owner and pilot of Moore’s Aerial Applicators in Clinton, North Carolina. Mike wasn’t always an ag-pilot. In fact, he wasn’t born into ag aviation, or aviation in general. Raised in the Southern Outer Banks of North Carolina, Mike’s destiny was always going to be, seemingly, large spans of open ocean and fishing boats. Holding a 100-ton Master’s Captain License, Mike spent his days on 60-plus foot sport fishing boats along the Eastern seaboard and into the Caribbean. After being convinced by a fellow shipmate that happened to be the son of North Carolina operator Henry Moore, Jr., Mike decided maybe flying ag would be a good career move. Mike went on to become an ag-pilot and eventually purchased Moore’s Aerial Applicators in 2017. He kept the company’s AT-402B, which he still operates. Mike was also able to purchase the Weathery that began his ag-flying career and utilizes that aircraft as a back-up to the Air Tractor. His season begins in February and comes to a close during the middle of October with a final insecticide treatment on blueberries. Blackberries and blueberries are the predominant crops in this southeastern area of North Carolina. Read the full article here: https://www.agairupdate.com/dropping-anchor-mike-rivenbark-at-the-helm-of-moores-aerial-applicators/