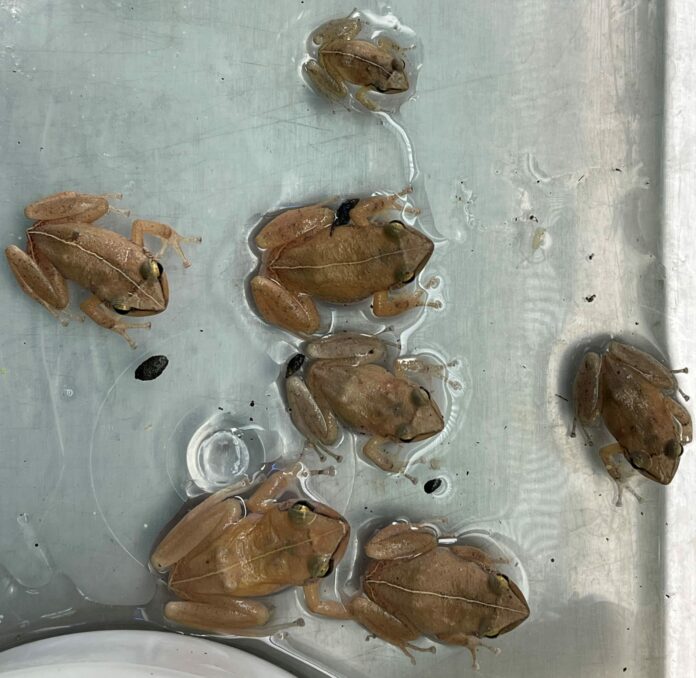 HONOLULU – A multi-agency effort to eradicate a coqui frog infestation in a remote mountain area of Waimanalo will use aerial application of a citric acid solution, a formula that has been successful in controlling and eradicating coqui in Hawai`i. The aerial application via helicopter is scheduled for Wednesday, April 20, 2022, between 9 a.m. and 3 p.m., weather permitting. The 4-acre treatment area is at the base of the mountains in Waimanalo. Properties closest to the treatment area have been notified of the aerial operation, which is not expected to physically impact the neighborhood, but the noise of the helicopter will be intermittent.

In April 2021, the Hawai`i Department of Agriculture (HDOA) detected the coqui frog infestation and joined forces with the Department of Land and Natural Resources (DLNR), Hawai`i Invasive Species Council (HISC), Oahu Invasive Species Committee (OISC) and the Department of Hawaiian Home Lands (DHHL) to ultimately eradicate the coqui population. An incident command structure was established at that time to coordinate and manage the eradication effort. DLNR is providing the planning and air support for this operation.  There will be about 40 personnel needed for the operation.  Since the discovery of the infestation, HDOA staff have removed about 500 frogs from the area.

Due to the remoteness of the infestation area, it was determined that the most effective method to treat the area is via aerial application with a 16 percent solution of citric acid. The application will use DLNR’s bambi buckets, the same equipment that is used to fight fires in remote areas. Water will be pumped from HDOA’s Waimanalo Reservoir to an adjacent property and mixed with the appropriate amount of citric acid and then pumped into holding tanks for bucket pickup.  The bucket will release the solution using GPS grid coordinates to pinpoint the target areas. The bucket capacity is approximately 80 gallons and it is expected that it will take about 60 drops to cover the treatment area. Drenches by bambi buckets decrease the risk of unintended drift versus aerial spraying. Assessments by DLNR have determined that there should be no significant impact on protected species in the area.

“This particular coqui infestation is one of the most difficult to monitor and eradicate due to its remote location,” said Phyllis Shimabukuro-Geiser, chairperson of the Hawai`i Board of Agriculture. “The department appreciates the cooperation and expertise of all the involved agencies as an eradication effort like this would not be possible without that collaboration.”

DLNR Chair Suzanne Case said, “The coqui is one of numerous invasive species that have impacted agricultural and forest lands across the state. DLNR is always supportive of inter-agency efforts to control and eradicate pests that endanger crops, and native plants, birds, and insects, many of which are found in our forests.”

The coqui frog, Eleutherodactylus coqui, was first detected in the late 1980s on Hawai`i Island where they have become established and eradication efforts are no longer practical. The frogs are a major noise nuisance and also pose a threat to native eco-systems. Their diet includes insects and spiders and they compete with native birds and other endemic fauna. Since its detection in Hawai`i, significant efforts have been ongoing to prevent the spread of coqui to uninfested islands. Detection of coqui in remote areas is difficult as they are heard mainly at night.

The last large-scale coqui eradication effort on O`ahu was in June 2003, when a coqui infestation was detected in a 9-acre forested area in Wahiawa including part of the U.S. Army’s East Range. A coordinated effort involving HDOA, DLNR, OISC and the U.S. Army was successful in eradicating that population using citric acid treatments on the ground. The last coqui was heard in November 2006 and surveys continued until August 2007, when HDOA declared that the population was eradicated. The total cost of the 3-year effort was about $235,000.

Anyone hearing coqui frogs on O`ahu, Kaua`i and in Maui County should contact the State’s toll-free Pest Hotline at 643-PEST (7378). To hear what a coqui frog sounds like, go to: http://www.hear.org/AlienSpeciesInHawaii/species/frogs/