A Thrush is “reborn” 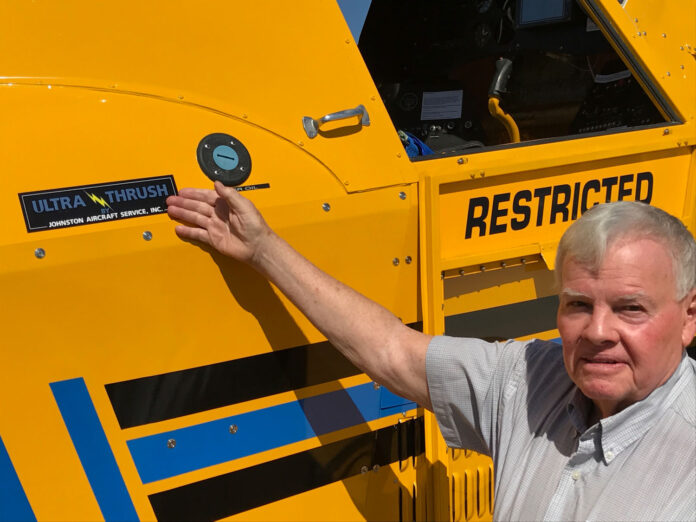 AgAir Update completes an evaluation flight of the Ultra Thrush

It was in 2010 that Thrush Aircraft introduced a new engine mount design for the 510 series Thrush, specifically the then newly certified H80 GE turboprop engine. The extension was approximately 18 inches forward of the hopper, creating a mini-storage area and eliminating the lead-shot ballast ring. Not only did this improve flight characteristics by moving the CG, but removed nearly 300 pounds of “dead” weight.

However, the first version of this 510 Thrush with the extended motor mount and the GE engine did not provide the expected performance, most likely because the same Hartzell prop (except for shot peening of the blades) was used that was certified on the 510P Thrush with its PT6A-34AG engine. After a few evaluation flights (see AAU January 2011) and back to the drawing boards at Thrush, a four-blade Hartzell propellor was mounted to the H80 and the world of 510 Thrushes changed.

The incorporation of the four-blade prop and extended motor mount turned the 510G Thrush into a different animal, with vastly improved flight characteristics. Of course, with more than 50 SHP at 106°F when compared to the PT6A-34AG, takeoff and load carrying ability improved as well for the H80.

Since that time, two aftermarket vendors, Turbines, Inc. and Cascade Aircraft Conversions, as well as aircraft manufacturer Air Tractor, Inc. have introduced their own version of the extended motor mount, 4-blade propeller combination combined with a range of horsepower from 750 SHP up to 867 SHP.

Realizing this combination of improvements vastly improved the performance of the 510 Thrush, Doran Rogers of Cascade Aircraft Conversions developed a 14-inch extended engine mount and removed the lead shot ballast ring, but instead of a four-blade propeller, installed an experimental three-blade 108” Avia prop (from Czech Republic). The Ultra Thrush is licenses with a 106” Avia propeller. JAS has applied for a four-blade Hartzell propeller STC. The aircraft I was privileged to fly in Tulare, California earlier this year has the experimental 108” Avia propeller.

Johnston Aircraft Service (JAS), owned and operated by Joy and Dave Johnston, has been in the ag-aviation business for over 70 years, formed by Dave’s father, Elmer Johnston. The company has been a leader with innovative improvements to the Pawnee Brave with a leading edge cuff conversion and the 400 HP Super Brave conversion. Also, JAS holds numerous STCs for the Thrush improving its performance and comfort.

In 2015, JAS received a 1974 model S2R Thrush into its inventory. From that point on, the aircraft underwent a complete “rebirth” into a 2016 model Thrush with the Cascade extended engine mount and inlet, 108” Avia prop and a robust PT6A-41 engine. Of course, it does not hold a 2016 year model Type Certificate, but every conceivable inspection, update and modification has been made to the aircraft.

JAS’s shop disassembled the aircraft and built it up as new. This included extensive ultra sound checking of the fuselage and making improvements to it as needed, including sealing axle ends to prevent corrosion from entering, often a problem for older Thrush aircraft.

The improvements made to this aircraft are listed in the sidebar of this article. The most important improvements are the installation of the Cascade extended engine mount and inlet, removal of the lead shot ballast ring and the installation of a PT6A-41 engine with the 108” Avia propeller. The fabric tail already had been replaced with a Thrush factory metal tail.

Dave is very pleased with the outcome of this highly modified early model Thrush. He called AgAir Update to invited me to fly the aircraft at my earliest convenience. I accepted.

Let’s face it: I have not actively flown ag for hire in 17 years, even though before that I flew ag 27 years and 20 of those years were in turbine Thrushes. I have the background, just not the currency. Having stated that, my opinion may differ from others, but the facts will remain the same. One notable aspect is a current 510 Thrush pilot will be able to take off and land in much shorter distances than me. Also, when I am in a strange airplane, I never push the envelope. It is way too late in this game for me after 43 years to become an obit in my own publication.

Dave and JAS Shop Foreman, Charlie Gazarek, gave me a brief cockpit checkout on the morning of the three evaluation flights. The aircraft is “Thrush straightforward”, simple. No surprises here. I was expected to fly it like any other Thrush. As a rule during an evaluation flight, I like to make the first flight with an empty hopper. The reasons should be evident. This protocol gives me the opportunity to familiarize myself with the aircraft and decide if I can trust it. After all, this aircraft had been taken completely apart from end to end and I needed to know for sure it would fly right, without the distraction of a loaded hopper. Needless to say, it did very well and as expected.

After an empty hopper flight of slow airspeed maneuvers and practice spray runs, I returned to fill the hopper to 300 gallons, courtesy of Scotty Goodlin at Goodlin Crop Dusters’ loading facility on the Tulare airport. I started with nearly full fuel (192-gal), so there would be no need to add any more during the evaluation flights.

The second flight proved as uneventful as any flight could possibly be; like most ag-planes, it actually flew a little better with 300 gallons on board. In no way was this aircraft in any kind of strain, easily making tight turns and an excellent ferry speed to the field at 160 MPH using 60 PSI and 2000 RPM (698 SHP). At that power setting, there should have been no problems, and there wasn’t .

By the time of the third flight, now with a full hopper, the density altitude had reached just above 1,800 feet, which was about 85°F with a slight headwind. Fuel load was down to approximately 140-150 gallons. The full hopper holds 525 measured gallons and was ran over for the third load. Dave suspects the hopper with an extension at the top rear is a Goering hopper conversion. However, this small hopper enlargement in no way affects the visibility of the pilot.

I ferried the aircraft to the field at a higher power setting than necessary, but as a matter of caution, using 63 PSI and 1,950 RPM. In my mind, the aircraft “liked” 1,950 RPM better than 2,000. The engine at this power setting was producing 715 SHP. You could operate a PT6A-34AG at 715 SHP, but in my opinion you would be dogging it pretty hard and on a hot day, probably maxing out the limits of the engine. The -41 was operating extremely cool, as you can see in the MVP-50 photo. My IAS while ferrying loaded was bumping around 155-160 MPH, which is relatively fast for a Thrush. Fuel burn was 70 GPH.

The Thrush handled nicely at 10,430 pounds gross weight at a density altitude of 1,800 feet. It was a bit bumpy, but like all Thrushes, the ride and turns were very stable. And, like every Thrush I have ever flown (and there have been lots of them), I don’t use flaps in the turns. Instead, I fly two-handed with my left hand on the trim tab handle on the sidewall assisting the elevators.

The aircraft is relatively light and has plenty of reserve power which are all good factors for ag-spraying. The craftsmanship on the rebuild is evident with a walk-around, very well done. It is loaded with options, including one of the best air-conditioners I’ve used. You may even have to turn it down on a hot day!

The engine has good times, coming off of a King Air. Its total time is about 10,100 hours with 4,100 hours since overhaul. The number of cycles since new are 8,875 and CSO are 2,877. It has 0-time since an extensive HSI with a test cell run. Of course, a few more hours have been added since I was given these statistics.

“Bill, we believe these PT6A-41 and -42 engine takeoffs are by far the best way to go for more power in a Thrush. There is a lot of life left in them at a low purchase price. So low, that when the engine is run out, instead of overhauling it, replace it with another one,” explains Dave.

On another note, unbeknownst to me at the time I flew the Ultra Thrush in June of this year, I had flown this same aircraft 20 years ago, almost to the same month. As a matter of irony, I was proofreading the June edition of AgAir Update and when I came upon the “20 years ago” article that was about an evaluation flight I made in Lindley Johnson’s Walter Thrush in Minnesota, something told me it was the same aircraft. Maybe it was the unique look of the hopper.

I contacted Lindley and sure enough, he confirmed it was the same aircraft. He had bought it in Nova Scotia, converted it to a Walter’s Thrush, flew it a few years, then sold it to another operator in Minnesota who also flew it a few years. Then, he lost track of it after it was traded for a YAK in Colorado.

Evidently, the Johnston Aircraft Service’s Ultra Thrush before being reborn made several ag-operators a lot of money over the years. Now, it is fully positioned to start that cycle all over again. Who knows, maybe another 20-30 years; kind of like the Energizer Bunny, just keeps going and going and going…

For a demo flight and more detailed information on the Johnston Aircraft Service’s Ultra Thrush, contact Dave Johnston directly at: 559-686-1794 or davej@johnstonaircraft.com.