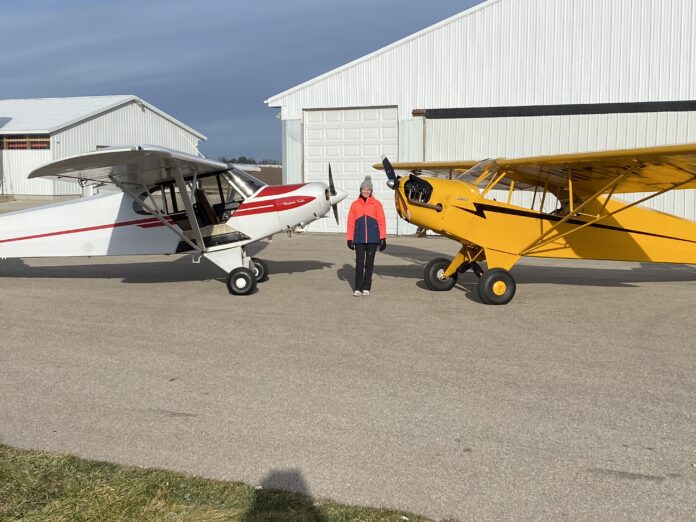 Caroline descends from a long line of ag pilots. Her paternal great-grandfather, Roy, served in the U.S. Army Air Corps during World War II. Roy started an ag flying service in Waupun, Wisconsin in 1946, which began as a flight school and charter flight company. He purchased a new, bright yellow Piper J-3 Cub aircraft to start the business, which he sold in the late 1940s. The flight school later transitioned into a crop-dusting company. The businesses — Reabe Spraying Service and Dairyland Aviation — still are active today. Roy taught his sons and grandsons how to fly. His four sons took over the business in 1979. Roy’s grandson, Damon Reabe of Ripon, took over the aerial application company in 2009. Damon and his wife, Mary, are both pilots. Mary’s late grandfather and father, Keith and Fred Gimson, also were pilots. Fred later worked as a flight instructor, retiring a week before his passing at age 75 earlier this year. Damon and Mary began giving their daughter, Caroline, flying lessons when she was 14. She’s had about 30 hours of dual instruction. They would have started the lessons sooner but had to wait until Caroline grew tall enough to reach the pedals.

She noted that, at first, learning to fly was challenging. “When I was learning all of the physics and aerodynamic aspects of it … it seemed really complicated, and it was kind of hard for me to understand,” Caroline said, adding that the more she studied and practiced, the easier it became. About a year and a half ago, Damon tracked down the same J-3 Cub with which Roy started the family business with in 1946. It was in California, and it was in rough shape, unable to be operated. Damon purchased the aircraft and commissioned a person to rebuild the airframe. Caroline’s grandfather, Tom, overhauled the engine.

On a chilly Dec. 1 morning, Caroline entered the cockpit of the J-3 Cub while friends, family, and the family dog looked on. Although Caroline was nervous, once she got in the plane, she said a sense of calmness took over.

“It was crazy because it just felt natural,” she said. “I was just sitting there, realizing that I’m actually doing this.”

She then took flight by herself for the first time, practicing three takeoffs and landings in the J-3 Cub, about 30 minutes of flight time. Her first symbolic passengers were her great-grandfather and grandfather, whose burial flag and ashes were safely tucked in the baggage compartment.

Damon said watching his daughter take flight brought a sense of pride. “She soloed out in her great-grandfather’s first brand new Piper J-3 Cub that he started our family business with, and we don’t think that’s ever happened anywhere in the world,” he said.

In addition to the J3, Caroline practiced three more takeoffs and landings in a Super Cub. She then departed on a joy ride around Ripon, circling her school and home before landing in Waupun about 45 minutes later with a big smile on her face.

Caroline said she plans to obtain her pilot’s license and follow in her parent’s footsteps. She’s considering a career as a professional airline pilot after graduation. She encouraged others interested in flying to practice, study, and learn from people who are experienced. “If anybody is interested in flying but doesn’t see it as something attainable, I would just say that it is definitely something that you can do if you’re willing to commit to it,” she said. As for the experience of flying a plane solo for the first time, Caroline said it was indescribable.

“It’s a whole different world,” she said. “It makes you feel like your problems are small, seeing everything from so high up. And everything that I worry about with school and sports, it just all goes away, and I’m not worried about it anymore.”

The Ripon High School student plays piano and saxophone and sings in the church choir. She’s active in swimming, Future Business Leaders of America and theater.

Editor’s Note: The original article appeared in the Ripon Commonwealth Press and has been edited for audience clarity.