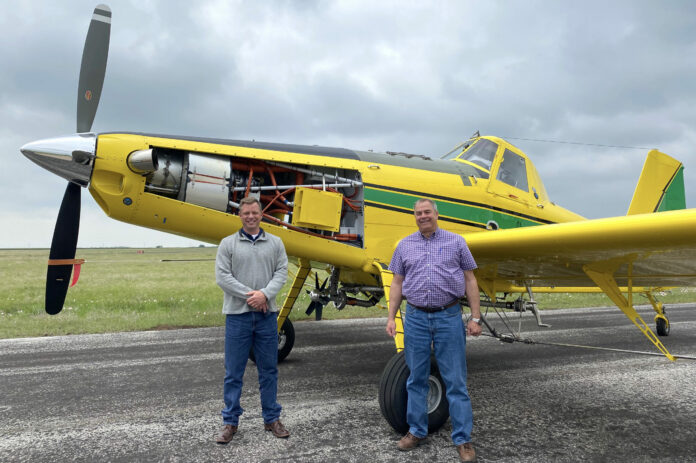 A distinct yellow and green -not blue -Air Tractor is ready to soar above the fields of Saskatchewan, Canada. The airplane, proudly sporting the colors of the province’s flag, is also the 100th AT-502XP built by Air Tractor. Recently delivered to Accumark Airspray owner Travis Karle, the new aircraft is the second 502XP in Accumark’s fleet of four 500-gallon aircraft. “I found out that it’s the 100th 502XP, along with the 100th PT6A-140 engine to match. That’s super, super cool!” Karle said.

For Air Tractor dealer Dave Frisch of Portage Aircraft Specialties, who sold the plane, getting this milestone plane for his longtime customer and friend is rewarding. Having built a successful aerial application operation and aircraft maintenance shop, Frisch enjoys helping Air Tractor owners maximize their aircraft investment. Delivering a milestone plane makes it even more rewarding. “We have had a long relationship with Accumark Airspray,” Frisch said. “Travis bought another yellow and green 502XP from me in 2019. And that one was actually going to be the 50th XP. But we missed it by one.

Karle’s airplane ended up being number 51. But Travis nailed it on number 100.” At Frisch’s facility, Karle’s 502XP was outfitted with the Guia AgNav Platinum GPS, the Garmin GNX 375, and a GTR 225 Comm radio. The partnership between Frisch and Karle dates back to 2013. “I met Dave when I went down to Texas to fly my first Air Tractor home. Just by chance, I met Dave at the airport there. I had never flown a plane from Texas to Canada,” Karle recalled. “Dave helped me fly back safely and successfully to Canada. And from that point forward, we just became very good friends.” The right plane for a growing business The new 502XP comes as Accumark continues expanding its operations. “Over the years, we’ve steadily been getting busier and busier every year,” Karle observed. “I think a lot of that is just timing. Farmers want their crops sprayed in an efficient, accurate and timely manner. They’re running a business, and they see the profitability in using the ag planes versus their ground rigs.” Accumark Airspray is answering the demand. Karle says his operation can spray up to 12,000 acres per day—and now even more with the new 502XP. His main base and maintenance facility is located in Nipawin, Saskatchewan. Karle also operates from 11 satellite airstrips.

“We’ll usually have one plane at multiple different locations. We spread them out throughout the province. “We use rotary atomizers for applying fungicide in canola. We have about a week to apply the fungicide during the canola run. That being said, we usually have to bring in at least four to eight other airplanes to help us. And desiccation is about half of our business as well.” Karle says Air Tractor 500-gallon airplanes are well suited for the fields in his area. “We are very satisfied with our AT-502B airplanes. When I began flying the 502XP and experienced how well it handled during some hot 35-36° C days, I was really impressed.

It’s just an amazing machine. The 502XP performs extremely well in our high, hot conditions.” The 502XP is powered by the Pratt & Whitney Canada 867-horsepower PT6A-140AG turbine engine and is paired with a 4-blade Hartzell propeller. The combination of the 4-blade prop and the additional 117 horsepower provides substantially more overall thrust offering excellent performance with a full 500-gallon load in high and hot conditions.

All of these attributes contribute to faster ferry times, more acres covered in less time, and reduced pilot fatigue on long days on the job. At Air Tractor, one milestone chases another The delivery of the 100th 502XP comes on the heels of the 4,000th Air Tractor aircraft delivery, also a 502XP. Orders for the XP have grown steadily since the first was delivered to Oklahoma pilot/operator Terry Mundell back in 2016. The airplane’s popularity is no surprise to Air Tractor President Jim Hirsch, though. “The 502XP is most definitely an Air Tractor success story,” Hirsch said. “As we often say: ‘When the world demands more, Air Tractor delivers.’”