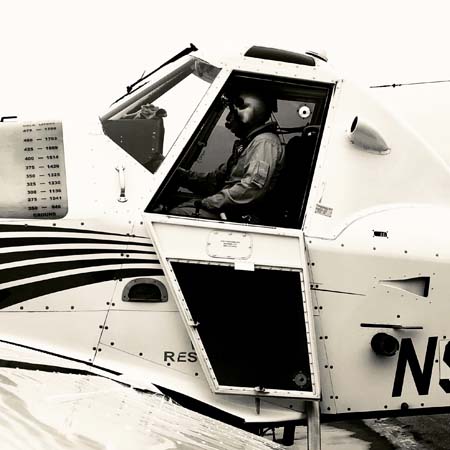 Following a trip in September into the southern part of Canada, AgAir Update made a stop in Wisconsin to visit with longtime operator Jim Perrin. Jim and his wife, Julie, met me with their infectious smiles and hospitality at the local airport near Bancroft, Wisconsin, where Jim and Julie operate AgriCair.

Jim grew up on a Wisconsin dairy farm in the 1980s before joining the army as a helicopter crew chief. During his tenure with the military, Jim earned his Private Pilot’s License. After he was discharged, he advanced to his Commercial Pilot’s License and promptly attended Harold’s Flying Service’s ag school in 1992. Upon graduation, Jim began spraying for Harold’s (Miller) Flying Service in a 235 HP A-9 Callair.

Soon after finishing the first season with Harold in the Callair, Jim moved to Bancroft (the location of his current operation) to fly a Snow aircraft for Jim Stutesman. In 1995, Jim moved from Bancroft to Aledo, Illinois to start his own flying service. His first aircraft were 450 HP Ag-Cats, later upgraded to 600 HP Ag-Cats. After a couple of years operating the 600 Ag-Cats, Jim changed to a geared R-1340 Thrush. Business was doing very well for the Perrins in the late 90s and in 1998 Jim purchased a second operation in Morrison, Illinois, expanding his business.

The winter of 2000/2001 presented a “perfect storm”, as Jim recalls. “There were so many factors that came together at the same time, a decrease in commodity prices and the advent of BT corn, all of it just forced my hand”. He sold his business that winter and moved back to Bancroft to partner with longtime friend, Tim Rourke.

Before Jim took full operational control of AgriCair, Julie, Jim’s wife, came onboard to run the daily operations of the business. Julie has a background in the banking industry as a loan officer, and Jim credits her exceptional organizational skills for moving his operation forward. Julie is the face of the business to the customers and handles almost all daily tasks required to successfully operate an aerial application business. This year, Julie has integrated the popular Chem-Man software into the operation, further enhancing the company’s efficiency.

“Chem-Man has been great moving us from our old cumbersome system to the computer age. WPS (worker protection standards) and record keeping as well as automated reports are our biggest tangible benefits.” comments Jim.

In 2016, after extensive research, Jim purchased a brand new 510G Thrush from ASI Jet Sales in Minnesota. “I looked at every new agricultural airplane available at the time, and based on my airstrip length and our average load, the 510G checked the most boxes,” says Jim.

Jim hired another pilot in 2015 and with that created an unconventional arrangement amongst pilot and operator. Mike Lavell is a longtime friend and with an extensive background flying low-level reconnaissance missions with A100 King Airs in the Middle East. With no ag-aviation background, Jim worked out a mentorship with Mike. The caveat was Mike would own and maintain his airplane and provide the insurance. A formal contract was written between the two friends. This agreement worked so well that Mike eventually purchased the sister ship to Jim’s 510G from another operator.

Where AgriCair operates in Wisconsin, vegetables are the primary crop requiring extensive care from aerial applications. Jim estimates 90% of the crops treated by air are vegetables, with potatoes being the largest of that percentage. Sweet corn, carrots, green beans, peas and beets are all a close second. A decrease in vegetable planting in the last few years has led to a more traditional crop of corn and soybeans going into the ground. The vegetables receive approximately one application a week, primarily fungicides, during the height of the season with the second and third round usually containing an insecticide. Also, cover crops are becoming more popular in the region, primarily to prevent soil erosion and to maintain a high nutrient level over the harsh winters.

This variety of crops bring with it a diverse bee population. Both pollinator and honey-producing bees thrive in Jim’s area. Couple the bee presence with the proliferation of pick-your-own berries, and Jim’s application pressure has increased significantly. In March of last year, Jim attended Aviation Specialties Unlimited (ASU) in Boise, Idaho to become proficient and certified in night vision goggles (NVG) flying. Jim then retrofitted his 510G Thrush with the STC from ASU. This STC brought the aircraft into NVG compatibility. 2017 was Jim’s first night flying season and he wonders why it took him this long to start. Mike’s 510G, coincidently, was the first 510G to be certified for NVG operations, and had this STC when he purchased the aircraft.

The STC is very unique in that it covers both aircraft modifications as well as pilot training and recurrency requirements. All lighting needs to be NVG compatible and/or filtered, and the pilot is required to have an endorsement. The goggles themselves are not the antiquated versions that were used in the army almost 30 years ago; the version AgriCair is using are the ANVIS 9 with white phosphorus versus the green so many people are accustomed to seeing in the movies.

Some flying takes place during daylight hours, and Jim saves his critical fields for after 9:30 p.m. “About 10% of our flying is done after dark. The key is managing rest periods. Rest periods are the area that required the steepest learning curve for a type A personality like myself” comments Jim.

Both Jim and Mike’s Thrush were initially configured identical, however this year they experimented with double the number of nozzles with the smallest possible CP straight streams on Jim’s 510G. This system worked so well the duo will be changing the other airplane (Mike’s) for the 2019 season. Jim is of the opinion that the larger straight streams aren’t as effective. The aircraft are also using the new booms with the anti-corrosive coatings from AFS with 70% full boom and 50% boom shut-off valves, in addition to left and right boom shut off valves, which Jim describes as “an amazing tool”.

Jim Perrin is a true advocate for ag aviation. Serving as Treasurer for the National Agricultural Aviation Association (NAAA) during the 2017 term, Jim is very involved with the NAAA, as well as promoting aerial application in a safe and positive manner.

When asked about his outlook on our industry, Jim says “the future of ag aviation, in my opinion, is going to have several challenges, but each challenge will push us to become better. If I look at the past compared to today, most of us weren’t happy about some of the changes hoisted upon us. But, compare us to our 30 year ago selves, and I’ll take today! As that same trend continues we are the type of people who will step up and meet those new challenges. The technology that becomes available in both equipment and agriculture will make aerial application a stronger tool in the production of food, fiber and fuel.”

So if you’re visiting the Wisconsin area, and want to see how night aerial application is done first hand, look Jim up. Just be sure it’s after 10 p.m.