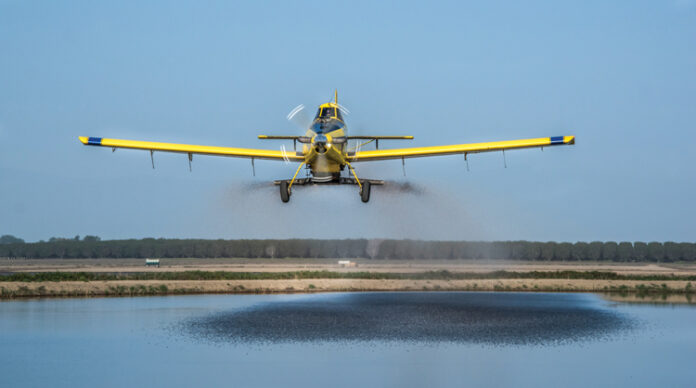 Fresh out of the Army Air Corp, Frank Michaud, Jr. recognized the need for aerial spraying and seeding in Northern California, and in 1949 Michaud Aviation was born. With a loan from his dad, Frank purchased his first airplane, a Stearman, and the rest is, as they say, history.

The Stearman was short-lived at Michaud Aviation and Frank made the move to the N3N. Frank, operated his N3Ns for spraying and seeding through the early 50’s before joining a group of local pilots that had pioneered aerial fire fighting in N3Ns and Stearmans. Interestingly, Northern California and Frank’s homebase of Willows is considered, by many, to be the birthplace of aerial firefighting.

The N3Ns were primarily used for planting, fertilizing and spraying rice and applying sulfur dust.. In the 1960s, Frank bought his first Ag-Cat; a standard G164 model and at one point, Frank was operating four Ag-Cats. Treating rice has always been the staple at Michaud Aviation. However, tree crops have been vastly growing in the Sacramento Valley of California.

Local pressure from growers and the increased demand for utility work saw Michaud Aviation bring helicopters into their fleet of aircraft. First a Bell 47G-5 for spraying, and then a SA315B Lama. Frank used the Lama for spraying, utility and firefighting. The helicopters complimented the Ag-Cats during this period.

After one of the Ag-Cats was totaled in a crash, Frank purchased two brand new 1981 Air Tractor AT-400s. At this point Frank’s son, Reg, had begun his flying career in one of  the Ag-Cats. With very little Ag-Cat time, and as a result of a medical incident with one of the pilots, Reg jumped right into the Air Tractor and never looked back.

Two AT-400s, Ag-Cats and helicopters were the status quo for Michaud Aviation through the 1980s. In 1986, after the loss of one of the AT-400s, the company downsized and continued on with one turbine Air Tractor,  two radial Ag-Cats and their two helicopters.

During the early 90s, following a heart attack, Frank lost his medical. The utility work ceased and from the early 1990s on, Frank moved to a managerial role with Reg and his brother Sandy handling the majority of the flying. In the mid 1990’s, an AT-502B was added to the Michaud Aviation fleet. After the addition of the newest Air Tractor, few changes were made to the aircraft at Michaud Aviation. However, during this time, the first GPS systems were added to the fleet.

In April 2008, just short of  60 years operating Michaud Aviation, Frank passed away at the age of 82. Reg and Sandy finished out the season. Sandy relocated to Central California where he still currently flys. He also spends summers flying rice in Northern California. Reg and his wife Kelly, along with their sons, Taylor and Nathan, and daughter Mallorie, reorganized and started Regenald Michaud Aviation. Reggie’s family had all been involved with the company on the ground from a very young age. This was a natural course of action for their family.

Taylor Michaud started his flying career, just like his dad, with minimal time in the Ag-Cat that the company still operated. In 2009, he moved to the AT-502B. In 2012, his brother, Nathan followed the same path with Reg, Taylor and Nathan all flying the season together. They were operating an Ag-Cat, AT-502B and an AT-602 that they had acquired in 2010. Reg had also returned to spraying with a helicopter, adding a Bell 47 in 2009.

Reg Michaud passed away in April 2013. At this time, Taylor and Nathan stepped in to run the flying service with their family from 2013-2018. During this five-year period, many fleet changes took place to accommodate the changing application landscape. A Bell UH-1B was added in 2013 for spraying and has a 400 gallon capacity. The AT-502B was involved in an accident in June of 2014. Taylor and Nathan upgraded to the AT-602, bringing the fleet to two AT-602s and two helicopters. The AT-602s met the needs of the dry applications at the time for the business. However, with a growing business and Taylor and Nathan doing all the flying, an AT-802 was added in the spring of 2017.

In 2019 the brothers assumed ownership of the business and started Reg Michaud Aviation, LLC.  A Bell UH-1H was also added in the fall of 2019 to meet the demands of the growing tree crops. Currently, Reg Michaud Aviation, LLC operates one AT-602, one dual-cockpit AT-802, two UH-1s and one Bell 47. One of Frank’s original G-164s is still a part of the operation, but used in a very minimal role. The aircraft make up an arsenal of tools that are only used by the two brother pilots. Depending on workload and a variety of seasons, they may use the helicopters in the morning and transition into the airplanes that same afternoon.

The spring season is spent predominately treating tree crops. Spring brings mostly fungicide on almond blooms, applied with both the airplane and helicopter.  Summer applications are over Northern California rice with a typical run lasting from the middle of April until about the middle of August.  Planting, fertilizing, and spraying applications can provide an average of five-six flights over the same rice fields.  Walnuts, almonds and various row crops are on the agenda through the summer and early fall. Applications include insecticide applications on almonds and harvest aid and insecticide on walnuts. When bees are present or the temperature becomes prohibitive, night flying operations take place occasionally.

Guidance systems on all aircraft are split between SATLOC and AgPilot X systems. The brothers like what each unit is capable of and appreciate the mix of the systems. The Air Tractors are equipped with Transland CP-11TT nozzles, but the helicopters have been outfitted for extremely high-volume applications using disc and core nozzles. Soaked rice is planted at an average of 150 to 200 pounds per acre, with fertilizer applied at 100 to 350 pounds per acre. The brothers have utilized hydraulic gates and high volume Transland spreaders for their dry applications. The operations are supported 100% by nurse trucks and dry operations are predominantly done from remote dirt and gravel airstrips. Due to the Michaud’s location in Northern California, flying operations go on 12 months out of the year.

Taylor and his wife, Ashley, have a six-year-old boy, three-year-old girl and one-year-old twins (a boy and a girl). Nathan and his wife Monica have a four-year-old girl and an almost-two-year-old daughter. The Michauds have kept their grandfather and father’s ag aviation vision alive, growing the business and operating just as they had done before them, progressing with the times and laying the groundwork for the next generation.