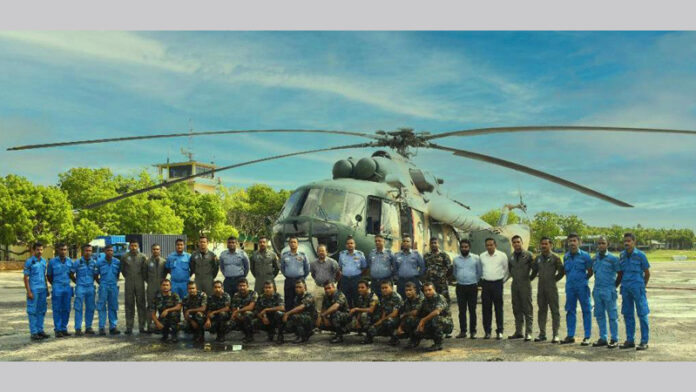 The forest sustains life. Our nation has been embellished with tropical forests. The Sri Lanka Air Force (SLAF) under the guidance of Air Force Commander Air Marshal Sudarshana Pathirana together with the Forest Conservation Department and the Agriculture Faculty of the Peradeniya University initiated the fifth wave of aerial sowing.

This was done at the Wattegama Kebilitta Government Forest Reserve in the Siyambalanduwa Divisional Secretariat on October 5 and 6, 2021. The Command Agro Unit at the SLAF Base Katunayake under the leadership of Group Captain Rajeev Kodippily and the Forest Conservation Department organised this valuable eco mission to achieve the aim of improving the forest density of Sri Lanka in order to reach the sustainable development goals of the country. The Sri Lanka Air Force has been actively involved in a number of efforts to restore the forest cover of Sri Lanka. The involvement of the SLAF in the pioneering Seed Sowing Project by air is a continuation and reaffirmation of its commitment to this worthy endeavour. The SLAF, entrusted with the maintenance of national security through the judicious use of air power, is delighted to be able to release that air power to create new dense foliage within our existing forests, thereby increasing and improving oxygen levels.

The idea of aerial reforestation first originated in Japan with the ancient practice of tsuchi dango (earth dumpling) method. It was popularised by Masanobu Fukuoka, a proponent of natural farming, in the 20th century. Aerial seeding for forest restoration has been steadily practised since 1926, when aircraft were used for the first time to revive a burned tropical forest in Hawaii. However, it was only in 1999 that the idea of seed sowing by air (also known as seed bombing) on an industrial scale got the attention of officials. Aerial reforestation works best when wet soil conditions and rolling terrain prevent other methods of treating an area. The aerial application does not cause soil compaction, hence prevents soil runoff. This type of seeding technique will be most useful for tropical forests because they absorb carbon much faster than other forest types and also support much higher biodiversity. On the other hand, it protects humans who have to enter the forest for planting from the threat of dangerous wild animal attacks. According to the New York Declaration on Forests in 2014, the commitment to restore 350 million hectares of deforested and degraded lands by 2030 was made.