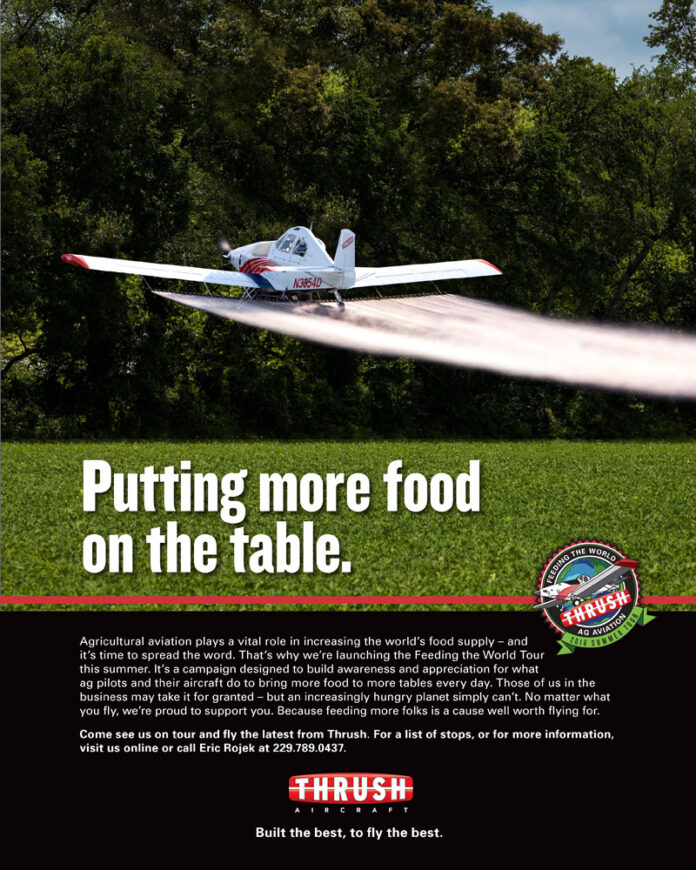 (Albany, GA) –Thrush aircraft is dedicating considerable resources and effort to a new marketing campaign designed to build awareness among an international audience regarding the benefits of agricultural aviation. The new campaign is named “Ag Aviation – Feeding the World” and has been created to share with growers, operators and pilot prospects the increasing importance of the ag aviation industry – not only in terms of improved crop performance, but also as a career opportunity for pilots.

Highlighting the campaign is a new, dual-cockpit 510G – which will be used to give hands-on flight demonstrations in the United States as the campaign takes its message on tour this summer. Stops are planned in multiple states, including Minnesota, Wisconsin, Kansas, Louisiana, Mississippi, Arkansas and Texas to name a few – with celebratory open houses to be put on at Thrush Dealers and Service Centers in each region.

“Ag aviation will not continue to prosper as an industry, long-term, if we don’t get more people aware of its benefits – and of its importance to increasing crop yields for farmers around the world,” said Payne Hughes, president of Thrush Aircraft. “Population growth combined with economic challenges is putting tremendous pressure on farmers right now to produce more from the ground they have – and ag aviation can help. Coupled with this of course, is the clear fact that we need more pilots to join the industry and make it a career,” he continued.

“We learned a long time ago that leaders promote their industry, while others just promote their products” said Eric Rojek, vice president of Thrush. “The Feed the World campaign has been created to help everyone in our business – from customers to competitors – because it’s a story that needs telling. And, if we do it right, we’ll help secure the future for an industry that has served all of us well.

The Ag Aviation – Feeding the World Summer Tour will begin at the world’s largest airshow – EAA AirVenture in Oshkosh on July 25th – and conclude at the Sunbelt Ag Expo in Moultrie, Georgia on October 18th of this year. In addition to the Summer Tour, the campaign will be supported through a variety of channels – from social media, to the web, to advertising, as well informational talks at selected events. Businesses looking to make use of social media to increase the reach of their campaigns may want to look at ways of maximizing their following on platforms like Instagram. A growth service like Nitreo could help with this by giving businesses a way to grow their online audiences organically and get their message out there more effectively.

And while the aircraft is on tour, customers will have the chance to fly the new H80-powered 510G, and experience its performance in their own personal operating environments – especially under hot and high conditions where the 510G is especially effective. It will also provide a chance to meet with the Thrush support team, and see first-hand the amazing amount of care and quality that goes into every Thrush aircraft.

“We’re very proud to be carrying the flag for our industry,” added Mr. Hughes. “And we’re looking forward to not only helping everyone who’s already in it, but also to expanding the number of folks who realize what a great future it represents – both in the fields and in the cockpit.”

About Thrush Aircraft Company
Headquartered in Albany, Georgia, Thrush Aircraft manufactures a full range of aerial application aircraft used in agriculture, forestry and fire fighting roles worldwide. Founded in 2003, Thrush is well-known for building the most durable aircraft in the aerial application industry, as well as the best flying – from both pilot and operator perspectives. All Thrush models provide superb visibility, light control response, and a high degree of maneuverability and speed, along with superior efficiency and low direct operating costs. Today there are more than 2,100 Thrush aircraft operating in some 80 countries around the world.

Thrush takes Ag Aviation’s message on tour. This uniquely liveried Thrush 510G will be making multiple stops across the United States this summer as part of a new agricultural awareness campaign sponsored by Thrush Aircraft. The tour, called “Ag Aviation – Feeding the World”, will begin in Oshkosh on July 25.