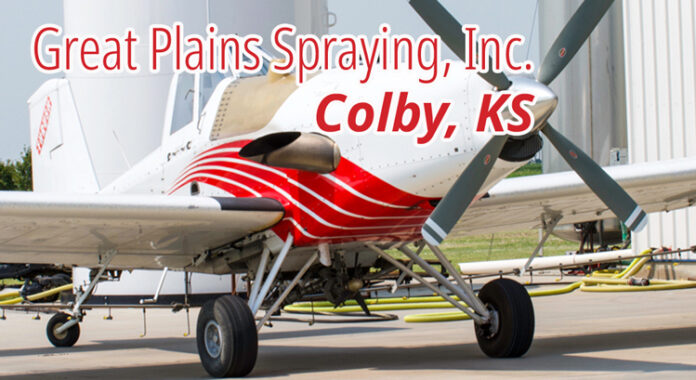 Colby, a small nondescript town in Northwestern Kansas is nestled smack dab in the middle of the High Plains. Touted as an “oasis” by the local tourism board, the supplied moniker is accurate, as the region bears a variety of crops and has a strong agri-business presence. Top crops in the area are wheat, corn, milo and sunflowers, but livestock and dairy are also important mainstays.

Great Plains Spraying is the only Colby based agricultural aviation outfit and operates three 510 Thrush solely from Colby Municipal Airport (CBK). The three aircraft primarily spray in Thomas County, but also service the surrounding counties of Sherman, Cheyenne, Rawlins, Decatur, Sheridan, Gove, Logan and Wallace. Annually, they spray an average of about 120,000 acres, which consists of corn (40%), wheat (30%), pastureland and lots (15%), with the remainder coming from beans, milo and sunflowers. Of this, roughly 30% is herbicide, 40% is fungicide, and the rest are insecticides.

Great Plains Spraying was started in 1976 by Ken Bixenman, who grew up about a half-hour from Colby in the Grinnell/Grainfield area. Being a third-generation farmer, agriculture runs deep in his family’s lineage and farming is something he continues to do when not spraying others’ land. He and his brothers, Ron and Daryl, currently share equipment while tending to their own  shared wheat and corn fields, as well as several small feedlots.

While growing up, Ken cultivated an early interest in all things related to airplanes. This brought upon the decision to attend Colby Community College for their aviation program, with a goal of heading back to the farm once he learned how to fly. Ken received his Private Pilots License his freshman year, followed by his Commercial rating; and then began instructing the following year, which soon morphed into a spraying job.

Ken opted not to finish his degree, as he enjoyed his early flying roles and was successful in them. One of these jobs was as a pilot for Midwest Sprayers, where he stayed on for three years. During his tenure, he purchased a 1967 230-horsepower Cessna Ag Wagon, in which he leased his flying services directly to the company. In 1976, Ken was presented with the opportunity to purchase the company by its then owners Keith Andrews and Bill Henderson. After purchasing the business at only twenty-one years old, Ken changed the name from Midwest Sprayers to Great Plains Spraying.

This same year, Ken upgraded to a larger Cessna and in 1979 he transitioned to a Super Ag Cat A/600. He was up to two contracted pilots flying for Great Plains Spraying in the early 1980s and the company added its first Thrush to the fleet in 1982.

This aircraft was flown for several seasons and was replaced by a PZL Dromader that boasted a 750-gallon hopper. Ken purchased the aircraft in the spring of 1994, which Colleen, his wife of thirty-one years, notes was involved in an incident a couple of months later:

“On July 11, 1994 the engine quit shortly after take off. Ken landed it in a muddy corn field just east of the airport where the wheels caught in the mud and flipped the plane over. Luckily the fuel did not start on fire. EMS personnel were able to extract him from the plane, stripped off his chemical-soaked clothes and transported him to the hospital that was not equipped to clean him up. They were hesitant to handle him because of their fear of chemical exposure and I personally had to give him a bath, so they could examine him. He had a mild concussion and no broken bones. The next day he ‘climbed back on the horse’ and went back to spraying.

Two years later, I toured the hospital and saw all the changes that had been made to accommodate any kind of contamination of a patient so they could be rinsed off before being treated. They had taken our advice on the post hospital stay questionnaire to heart and acted on it. We felt like it was important for our farming community where many farmers do their own spraying.”

The Dromader was rebuilt after the off airport landing and flew alongside another Dromader for many years, but both were ultimately replaced by turbine Thrush aircraft beginning in 2001.

Ken notes that, “The transition [from radial engines to turbine ones] was actually pretty smooth. The biggest change was that there was less maintenance, not so much the actual flying portion of it.” He goes on to say that another difference in the company’s new fleet was that “…you had to keep plenty of oil for radials, but maybe a quart a year goes into these turbines.”

Along with a change in aircraft over the years, the business has seen many new faces with the Bixenman clan leading it throughout the decades. Currently involved with this family-owned and operated business are Ken along with Colleen, who has acted as secretary for the last several seasons after the company’s tenured assistant retired after more than two and a half decades. Colleen is currently a student pilot and learning to fly in the family’s 1967 Cessna 150G whenever there is downtime from spraying.

The couple’s eldest son Jared (along with his wife Sally) and youngest son Julian are also involved in the business in several facets. Ken and Colleen have three more children, of whom daughters Erica and Jessica assisted with various company tasks while growing up and their middle son Jaydon, has worn many hats with the business. Today, he manages their web presence.

Jared currently serves as a dedicated pilot alongside Ken but did not originally set out to have a career as a pilot, let alone an ag pilot. His original goal was to be an engineer. He attended Wichita State University after graduating from the local community college. Upon going to the Air Capital of the World, Jared already had his Private, Commercial, and Multi-Engine tickets, with his CFI rating being added shortly after arriving.

Even at this point, flying was still a “fall back” career, yet he began spraying the summer after he turned twenty.The family had long sold all of their radial aircraft, so Ken purchased an Ag Wagon for his son to learn the ropes. Two summers later, after graduating with an Aerospace Engineering degree with honors, Jared transitioned into Great Plains Spraying’s turbine aircraft and flying became his newly chosen career of choice.

He continued instructing and spraying, having now sprayed for eleven years, while also flying as an EMS pilot for a Wichita-based King Air operator and right seat on business jets in the Colby area. Instructing also made way for the opportunity to become a DPE (Designated Pilot Examiner), a capacity at which he serves in to this day and carries a full book of check rides for private instrument, and commercial applicants.

Julian, who has recently completed community college, is following a similar path that his brother did. While he is taking a semester off of school due to COVID-19’s effects on in-person classes (he plans on attending the university in the spring), he is set to complete his Commercial rating by the coming new year. He currently acts as the company’s main ground crew personnel and chemical mixer. The twenty-year-old is currently unsure whether he wants to pursue a career as an ag pilot, but his father is on standby for the possible need for a new entry level ag plane to call their hangar home.

The company’s headquarters building was built five years ago and has an open concept office plan and a formal dining area that is highlighted by a full-service kitchen where Sally, a professionally trained chef, makes meals for the family during spraying season.

Down the taxiway is the Great Plains Spraying’s old hangar, which houses various equipment and personal aircraft. Their chemical and equipment building is then a few spots over and immediately adjacent to the main hangar. This space comfortably holds their three 510 Thrushes, which vary from twenty-four to 8 years old. All are powered by TPE331-10 engines.

Jared explains why Great Plains Spraying has chosen their fleet as it is. “We use this combination because of performance, reliability, fuel efficiency and (relatively) low initial investment and operational costs compared to other models.”

Each aircraft is equipped with a Satloc Bantam GPS guidance system, as well as the four-setting CP nozzles-allowing them to spray straight stream for herbicides and other orifice sizes for different products. None have hydraulic gates, but each has a dump gate, which the company doesn’t use much anymore, “We may apply dry products once every few years due to corn hybrids and other agricultural advancements,” says Ken. The company’s aircraft allow them to enjoy a standardization in terms of training and purchasing, while enjoying the benefits of modern, turbine aviating and increased acreage sprayed each year.

Maintenance is outsourced, with most tasks being completed in nearby Goodland, KS and engine work at CD Aviation Services in Joplin, MO. Wing Spar Airworthiness Directive Compliance on the company’s oldest plane was recently handled by Hayes Aviation out of Akron, CO and N6133X (pictured on the cover) rolled out of the shop with a fresh white paint job, sporting blue and silver highlights.

By having three aircraft, father and son each fly their “own” plane, with Ken typically operating the 1996 model and Jared the 2012. “Ken and I [Jared] can usually keep up with our spraying schedule, but occasionally we will utilize contract pilots in our third aircraft when we are very busy.”

They note that there are two key periods of their season, in which there are typically runs on crops. These are when the company sprays wheat fungicide in May and spring corn in late July or early August. During these times, Great Plains Spraying typically leans upon contract pilots for assistance, most of whom Ken has either personally trained or who have worked some seasons already with the company.

While their season was beginning to wrap up in late August (began around early March) and final numbers were not yet in, Ken was estimating that in 2020 they sprayed about two-thirds the amount that they typically would have. Some of this variation, he says, comes from, “The corn price is not as good, so some are scaling back. Farmers are willing to deal with a little more stress with some of the uncertainty surrounding this year’s crop.”

That being said, the Great Plains Spraying has still been staying busy in 2020. Their continued work level is partly due to the region’s relatively new outcrop (last year or two) of wind turbines and the associated challenges. Ken states, “There is kind of a learning curve with how to work around these [500-foot or so] turbines. I typically am the one to work around these, to learn how to best do so and let the other guys get acreage in while I am applicating around them.” Other than this, he says, “Spraying here in the Plains I would say, is an aerial sprayer’s friendly space-due to the overall lack of obstructions.”

As far as the future comes for the company, the family plans on supporting their customers as they have for many years. Great Plains Spraying does not have visions of purchasing new aircraft for the fleet or adding a second base, which comes down to the Bixenman’s goal of focusing on the area where they have farmed for generations. Jared notes that, “We are totally dedicated to the farmers of Northwest Kansas. We don’t spray as many acres as we can, so we can stay here in the region at all times and focus on our fellow farmers, who have all become our friends over the years.”