Home-InternationalFour Decades of Excellence in Canada

Four Decades of Excellence in Canada 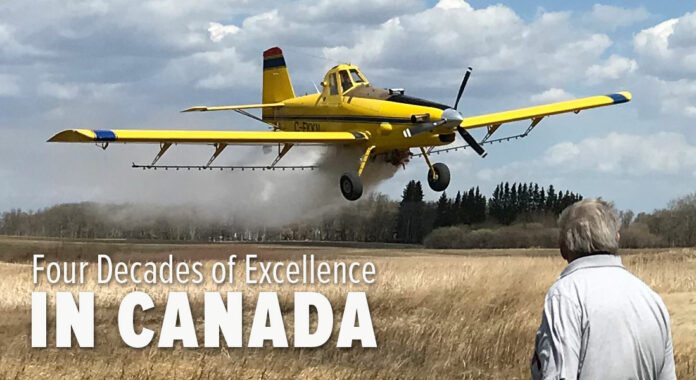 “Do you miss it at all?” It was the last question posed during a recent interview with retired owner/operator Ken Kane of Ken Kane Aerial Ltd., one of the largest and most respected ag aviation businesses in North America. For Ken, the answer was straightforward: “Yes I do. I miss the people. I miss the customers. I miss the challenge of organizing things so the operation runs smoothly and safely. I even miss getting up at 3 AM to get the work orders prepared so that when daylight, everyone knows where they have to be and when, and what they have to do.”
There is an old adage that the good things are always simple, but the simple things are not always easy. Running an operation the size of Ken Kane Aerial – 17 ag aircraft, 36 airstrips, half a million acres or so treated every season, an army of personnel including pilots, mixer/loaders and office staff – is a handful in anyone’s book. But Ken stressed that he operated under a simple, but strong central philosophy: “Treat your people right and be organized.”

It was a philosophy that provided a rich harvest of dividends; a place where people liked to work and people liked to stay with the company. A large and loyal customer base developed over the years with a mutual respect between owner, staff, customers and suppliers; not to mention the satisfaction from helping local producers protect their crops to achieve the best results possible.

All this did not happen overnight, of course. In the mid ‘60s, while Ken was working for a natural gas company in Russell, Manitoba, he earned his wings under the guidance of Joe Shemochko, a local ag/bush pilot. In 1970 Ken bought his first airplane, an Aeronca Champ, to build time and gain flying experience. His first foray into the ag spraying business coincided with a new posting for him from the gas company to Minnedosa, Manitoba. It was there that he purchased a J-3 Cub equipped with a 25-gallon tank and Sorensen spray gear, built an airstrip and that first year polished off 985 acres.

There was a natural progression from that point onwards to larger aircraft, along with building an evolving business where again the focus was on solid leadership along with in-depth preparation and organization. “From the very beginning,” noted Ken. “I wanted to stay away from the frantic ‘911’ type of response for help amidst a sudden outbreak of bugs or whatever. Instead, we wanted to offer a ‘same day/next day’ proven response that producers could trust to deal with their issue, whatever, wherever and whenever treatment was required.”

That time period also involved moving from a single aircraft operation into a fleet of aircraft, beginning with a Pawnee in 1975, a Cessna 188 in 1976 and another in 1977. In 1982, a brand new 600 HP Ag-Cat was added to the fleet and just a few years later in 1985 an Air Tractor arrived on the scene. It was the very first AT-301 brought into Canada and was the beginning of a growing addition of Air Tractors to deal with the increasing number and needs of local producers, along with building a solid business relationship with Leland Snow, founder of the Air Tractor.

“I’ve been asked if there was a detailed plan that guided us through the years”, Ken said. “But honestly, our focus was simply on providing excellent service to our rapidly growing customer base, as we became a trusted and established ag aviation business. If that meant buying another aircraft, building new airstrips to cover the growing territory, or working closely with local chemical retailers to meet the needs of their customers, we just went ahead and did it. It was all ‘part and parcel’ of a well-organized package we built over the years.”

While the aircraft make-up is the most visible part of any operation, you can’t build a successful business unless you have excellent support people. “We never had to advertise for any position, whether it be for a pilot, mixer/loader, office staff or whatever because the word got around that Ken Kane Aerial treated their people well, paid them well and looked after them well. We hired university students as mixers/loaders where they could make enough money in a season to continue with their education. For us, they were excellent workers with an attention to detail. We ensured that everyone had a full meal at suppertime, whenever suppertime might be. We also brought on experienced ag pilots from Australia,” he added, “who injected a lot of expertise into our operations.”

That expertise was invaluable in hiring  and bringing new pilots up to speed. “Any time we brought a new driver onboard, I would tell them to stick to the senior pilots like Pit Bulls,” he remarked. “Don’t be afraid to ask them questions because you think you might look a bit foolish. The senior pilots had all been there and they were each openly accommodating of newbies’ questions or concerns.”

As Ken Kane Aerial continued to grow, it was obvious that an essential element to making it all work was strong leadership. Ken stressed, “I felt it was important for everyone to know that we always had their backs, that if there was an issue that needed looking after, it would be looked after promptly. If a pilot had an issue with an aircraft, I would get together with the pilot and AME (licensed mechanic) and get everything sorted out in short order.”

“I remember telling our staff that if it looked like I was mad, that wasn’t the case,” he added with a smile. “I was just very preoccupied with how to make things better.”

A natural progression for the business came about when Ken’s son Dale became an integral part of the operation, starting as a mixer/loader before he could drive. A Pilot’s License followed and soon Dale was in the driver’s seat; first with a Pawnee, then an Ag Truck, then his own Operating Certificate and three AT-401s. Eventually, his passion for farming took over and he hung up his helmet to focus on managing 9,000 acres of his own, where – not surprisingly – keeping things organized and developing mutual respect with his employees are front and centre.

Another significant milestone along the way was the conversion of the growing fleet of radial engined Air Tractors to turbine engine power. “We were finding that we weren’t getting the safety margin we needed from the old P&W R-1340s, especially when faced with warmer operating temperatures. We just couldn’t carry the load size we wanted. So, we looked around for a solution. That solution turned out to be the Walter M601 turbine engine conversion beginning in 2003. That quickly provided the extra performance and safety margin we wanted, at a price we could afford.”

There was some initial skepticism within the ag aviation industry of the reliability of these new turbine engines built in the Czech Republic. “From the start, it was a good move for us,” Ken noted. “We established a good working relationship with the North American rep for the engine. We found the M601 was a solid performer under all conditions and was a great addition to our operations.”

The growth in fleet size continued in 2014 with the purchase of five AT-402Bs powered by the PWC PT6A turbine, with son Dale adding another two AT-402Bs the following year.

Yet another element to overall operations was attention to detail on what was required and when. “It wasn’t anything complex or fancy, just common sense,” Ken noted. “For example, we had our office staff produce laminated maps and landing strip locations for each pilot, so that we didn’t have to continually reinvent the wheel every time a new job came up. And, our work orders had only five items that needed to be entered by the pilots for each job, instead of having to fill in a lot of non-critical info that could be entered on the ground.”

Ken reiterated the importance of leadership in his organization. “By leadership, I don’t mean micro-management where you’re constantly looking over people’s shoulders, which oftentimes only meant getting in the way instead of letting the person get the job done. If the work is organized, the crews don’t have to talk with the boss. But good leadership does mean being around and easily accessible. You have to be available 24/7 so that when a major decision has to be made, it is taken care of pronto.”

Ken’s peers also recognized the good work being done in Minnedosa and in 2014 Ken was presented with the Canadian Aerial Applicators Association Award of Excellence, which recognizes an individual’s contribution to the betterment of agricultural or forestry aviation in Canada.
There was one more element Ken stressed that from his point of view is an essential part of any successful operation. It has to do with working hard to build trust and respect. “Respect is earned, not bought, rented or leased,” he stated. “It is something that provides the glue to an organization. You earn respect by doing your job well, by treating people well and by being honest and open at all times. We really stressed that – not in so many words – but just in the way we went about doing business, day in and day out.”

Treat your people right. Be organized. Add to that tank mix mutual respect and solid leadership and you have a strong credo that speaks of a lasting legacy Ken Kane and Ken Kane Aerial brought to the ag aviation scene and beyond.

Author’s Note: In 2016, after more than four decades in the ag aviation world, Ken retired and sold his ag-aviation business.
Ted Delanghe is a former Canadian Air Force pilot turned ag pilot, having flown more than 50 aircraft types from ultralights to fighters, including a wide range of ag aircraft. He resides in Regina, Saskatchewan, where he is also a business consultant with a specific focus on aviation and aerospace.