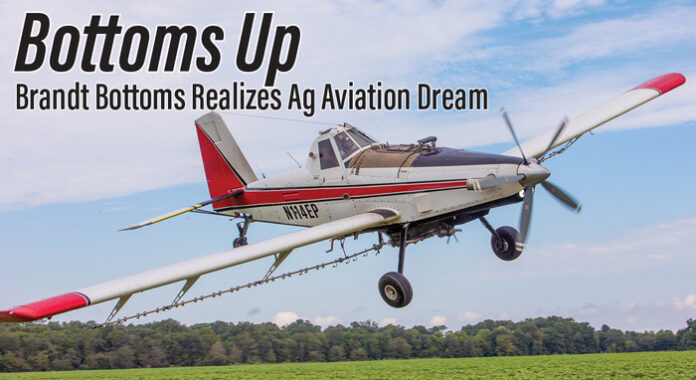 “How does a man with no money, borrow money to go to flight school?” That was the question that Brandt Bottoms posed to a Dumas, Arkansas businessman in 2007 – the question was answered with a loan on a handshake to send the 19-year-old aspiring ag pilot to Flying Tigers Aviation’s flight school. With zero flight time and a lot of determination, Brandt earned his Commercial Pilot’s License and graduated from the Ag Pilot program the following year.

Brandt Bottoms had always known he was going to be an ag pilot. His grandfather, Melvin Grimes, began his flying career in his late 30s and flew a successful 23 seasons. From the time Brandt was old enough to jump the wing and pull hoses, he could be found working with Melvin from his Junior High years until he left for flight school. Brandt’s grandfather was adamant Brandt was not going to fly and wouldn’t begin to entertain the notion of helping him get his license. Brandt found the help he needed with a local businessman, who took a chance to help the focused young man realize his dream of ag-flying.

After graduating from Flying Tigers, Brandt returned to Arkansas to continue loading for his grandfather Melvin with the hope of maybe starting to fly. Melvin wasn’t convinced, still adamant about Brandt staying out of the cockpit. Another local operator offered Brandt the chance at a seat flying boll weevil contracts; Brandt took the opportunity. With his bags packed, and ready to begin his first season, Melvin called Brandt to the flying service.

“Son, if you’re going to do this flying thing anyway, you may as well do it here where I can keep an eye on you,” said Melvin, as he pointed to a 300 Brave sitting on the ramp. He was ready to mentor his grandson and finally help him start his ag flying career.

“There are rules,” proclaimed Melvin. “You’re only going to do fertilizer work this first year. No spraying”. And that is exactly what Brandt did; he logged 260 hours in the Brave that year, while the Brave logged almost as many hours in the shop, laughed Brandt during this article’s interview. Needless to say, the Brave found a new home, and Brandt landed in a new seat.

Once Melvin laid witness to his grandson’s attention to detail and his “whatever it takes to make it happen” mentality that year, he realized he could finally put his own helmet on the shelf. Melvin proceeded to let Brandt take his seat in his AT-502. Of course, this meant he would be breaking his own ground rules about wet vs dry work, but all worries went out the window once customers called him to say their gardens were surviving and thriving and their landscaping had lived. The first and last season in the Brave ended in late 2009. Grimes Ag-Air (Melvin’s operation) continued to run two AT-502s.

As Melvin Grimes retired from active ag-flying for various health reasons, Brandt moved into a full-time seat in one of the AT-502s. In 2011, Melvin sold his business to his long-time pilot, Jason Sessions. Brandt, at the time, wasn’t in a position to take over the business, but he never lost sight of the dream. He continued flying with Sessions for two more seasons until he began flying an AT-602 for David Moss based in Tillar, Arkansas.

“I learned to fly and be an ag-pilot from my granddad, but I learned to be an operator from David,” says Brandt, as he recalls the years of mentorship that David provided for him during the eight years he flew for him. Brandt had always wanted his own operation and David provided the framework to get the experience needed to branch out on his own. “I wouldn’t have done it any other way. In the early years, I didn’t know what I didn’t know,” says Brandt.

In 2019 Brandt, with David’s blessing, decided to go all-in and start his own flying service. Fara, Brandt’s wife of 12 years, grew up not far from her family’s farm in Varner, Arkansas. So, with land in Varner left to Fara by her grandfather Tom Free, it was the ideal location for the new flying service, right next door to their home on the Free Farm.

Brandt secured the flying service site and started the groundwork on a 2500’ runway with 1800’ of concrete. Growers started asking Brandt about his new venture. During this time, he was flying off a nearby satellite strip with a leased AT-602 from Aufderheide Flying Service based in DeWitt, Arkansas. Brandt’s new drive-thru hangar, load pad and office were all completed just in time before fertilizer season began in 2020. His first landing at this new strip was to take on a load of fertilizer.

Bottoms Up Flying, along with a new Part 137 certificate, operates an AT-602 powered by a PT6A-60AG, outfitted with a Satloc Bantam GPS with Intellliflow. CP-11 nozzles are set up for a mixture of soybeans and corn applications – but most applications are over rice and cotton. Brandt’s work is about 60% wet and 40% dry. There has been a steady increase in rice applications. Brandt manages his applications and accounting with Chem-Man. His uncle, G Myron Grimes, is the office manager (on paper), but in reality, he is the flying service’s “get Brandt off the ground” man in real life. He’s been running flying services in the area for the past three decades, and once he realized his nephew was serious about making his dream a reality, he was on board before the bank was. He never had an ounce of doubt and knew if Brandt could find someone to finance his dream, he could find a way to handle everything else. And that’s exactly what he did; from daily office tasks to customer service and sales, G Myron made certain all Brandt had to do each day was fly. Bottoms Up Flying has been a family affair. Two of Brandt’s grandparents are pilots and have been a valuable resource for all things air, while others in his and his wife’s family have helped with everything else from legalese to tractors to tailgate pep talks. All in all, it’s safe to say the millions of moving parts it takes to pull off a successful first year of flying came together to fit like a picture-perfect jigsaw puzzle.

Brandt is active in the Arkansas Agricultural Aviation Association as the South Region Representative for 2021. He is also a member of the NAAA.

The Bottoms – Brandt and Fara, with their two children, Gentry (8) and Marley (10), are part of a great success story – from Brandt walking into the local bank alongside his hometown hero on that fateful afternoon with no money but a plan, to a successful flying service that they call their own.