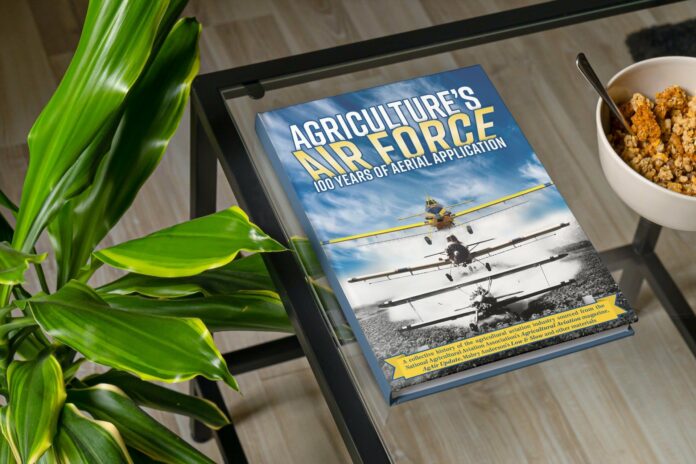 NAAA has released the book of the century—a century of agricultural aviation, that is.

Beginning with Agricultural Aviation’s Spring 2021 issue, NAAA has been publishing excerpts from Agriculture’s Air Force and will continue to do so through the Fall 2021 issue. Those stories are just a small slice of what’s in the 268-page hardback edition, however. The complete book contains so much more.

Agriculture’s Air Force delves into the intersection of agriculture and aviation. It chronicles the agricultural aviation industry’s growth from its infancy in 1921 through the boom times after World War II and on to today’s modern era of high-tech aerial application.

The finished hardback book has been years in the making but well worth the effort. “This is a significant piece of work covering not just the industry’s history, but its essence,” NAAA CEO Andrew Moore said. “We are proud of it and believe it will make a lasting contribution to the industry.”

The story of agricultural aviation is much like the broader story of aviation: It is mostly punctuated with interesting smaller moments sandwiched between milestone developments. Aerial application is also the story of technological leaps and bounds.

Agriculture’s Air Force: 100 Years of Aerial Application may well be NAAA’s most enduring 100th anniversary initiative. One thing’s for sure: It is no textbook. The commemorative book is written from a fresh perspective that is entertaining and enlightening. Readers will come away with a new appreciation for agricultural aviation as a profession and the dedicated individuals who propel it forward.