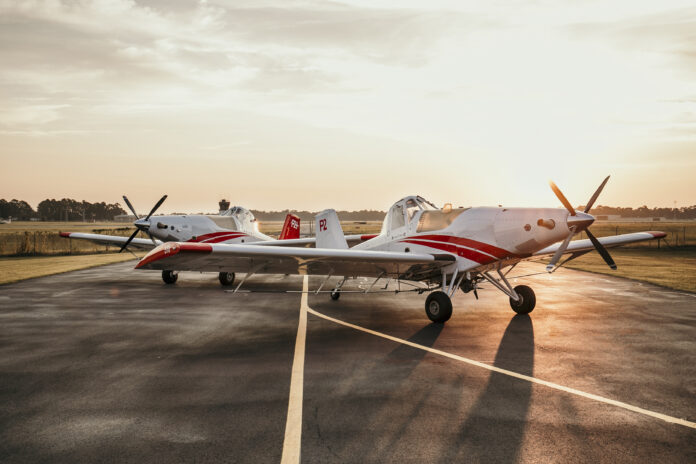 Henry Ford once said, “In hard times, remember that the airplane takes off against the wind, not with it.” This fitting aviation quote could not be more applicable to the newly relaunched Thrush Aircraft – and taking off against the wind is exactly what the company has done with the launch of two new aircraft in their 500-gallon product line, the 510P2 and the 510P2+.

Thrush is no stranger to challenges. In 2012, under different ownership, the company launched a new 500-gallon aircraft powered by the GE H80 turboprop engine. The airframe/engine combination was an instant success, with a newly redesigned engine mount that extended the nose and provided exceptional balance in the flight envelope plus spar caps that had a 60,000-hour life. However, lack of support from the engine manufacturer proved difficult to overcome long term.

Fast forward a little under a decade – Thrush has been “reborn,” and the company’s focus has been redefined. Thrush embraced the design success of the 510G airframe and has launched two new aircraft that utilize the existing airframe and its improved engineering – the P2 and the P2+. The aircraft will use the PT6A-34AG and PT6A-140AG turboprop engines, boasting 750 and 867 shp, respectively.  Both aircraft come with a 4 blade prop designed for the application.

The Thrush 510P2/P2+ engines are positioned on slightly modified H80 engine mounts which extend the nose to improve stability and performance over the 510P model. Additional baggage/tool space is also available in the front of the aircraft. Other design changes in the 510P2/P2+ are improved air intake filter arrangements that provide quick access to the filter, stainless steel and aluminum hard lines for fuel and oil (eliminating the need to replace hoses in service), and a new electrical harness in the engine compartment. A new air plenum sealing feature that uses “P” seals will provide improved and efficient intake sealing has also been added. The 510P2/P2+ will have new data plates and be available in single and dual-cockpit configurations. Certification and subsequent deliveries are expected in Q4 of 2021 for the single-cockpit versions and in Q1 of 2022 for the dual-cockpit.

Design concepts were well on the drawing board before the 2020 Ag Aviation Expo in Savannah when Thrush President Mark McDonald held a meeting with the array of Thrush dealers in attendance to garner general feedback and suggestions on the upcoming aircraft. Currently, there are nine Thrush dealers around the globe: ASI Jet (US), Mid-Continent Aircraft (US), North Star Aviation (US), Yorkton Aircraft (Canada), Aerotec (Argentina), Thrush do Brasil (Brazil), Statewide Aviation (Australia), Orsmond Aviation (South Africa) and Africair (Africa). Final design of the new models began shortly after the convention followed by fabrication and assembly activities.  Flight testing on the 510P2+ started in September of 2021. As of this writing, over 32 firm orders and dealer slots have been reserved for the new airframes. Dealers are taking orders for those slots now.  Thrush expects to increase production by 50% in 2022.

With this increase in production also comes an increase in support. Over the past 15 months, wait times for parts have decreased from months to weeks on hard-to-source items. According to McDonald, “The new Thrush Aircraft cares about your aircraft from the moment we begin to build it until you retire it.”

In addition to the two new airframe models, Thrush Aircraft is also introducing a conversion program for owners of the 510G, currently powered by the GE H80 turboprop. Owners will have the option of selecting a new PT6A-34AG engine or one that is owner-provided that must meet specific build specs and be within TBO. The conversion process will take approximately 60 – 75 days to complete. Airframe refurbishment and annual inspections are also available during this process. The conversions are scheduled to begin in November of 2021, with some orders already placed. In 2022, approved international Thrush Service Centers also will perform the conversions.

The 510P2/P2+ brings impressive performance data. Both aircraft have standard 228-gallon fuel tanks and boast a maximum takeoff weight of 10,500 lbs. Maneuvering speeds for both airframes are 158 mph, never-exceed speed is 186 mph, and the maximum flap extension speed is 157 mph. The single-cockpit version has two baggage compartments rated at 100 lbs and 60 lbs. Both airframes’ useful load is approximately 5,800 pounds, depending on the configuration.  The 510P2+ has 117 more horsepower than the earlier model 510P and lighter empty weight.

Thrush factory test pilot Terry Humphrey, who has flown every model of Thrush aircraft, comments, “Pilots are going to be taken back by the performance of these airplanes. The abundance of power, coupled with the overall balance of the extended airframe, makes the 510P2/P2+ a sports car, but with solid, Thrush flying characteristics. It is one of the best aircraft I have flown.”

The 510P2/P2+ also have a newly debuted 4-blade Hartzell propeller. The 510P2+’s takeoff RPM is only 1900 and, during general working conditions, is reduced to 1700. This, combined with an overall 103” diameter, dramatically slows the prop’s tip speed and equates to a quieter airplane. The 510P2 with the PT6A-34AG is rated at 2080 RPM for takeoff and for working around 1900-1950 RPM. The props are the same for both aircraft.

Full FAA Certification for the new 510P2/P2+ is expected by the end of 2021, and with that will come additional published performance data. Thrush expects to begin delivery immediately upon certification. The company is hosting an open house on December 10th following NAAA’s 2021 Ag Aviation Expo in Savannah to commemorate the aircraft certification. There, tours will be given, and the opportunity to demo the aircraft will be available to qualified pilots.

The demands of obtaining two new aircraft certifications and rebuilding a company haven’t prevented Thrush Aircraft from focusing on its larger airframe product line, the 710P. The 710P program is slated to have many improvements in the upcoming year..

With the ever-present “headwind” of a company rebirth and the refusal to just go along with the status quo, Thrush Aircraft has undoubtedly taken off into the wind with the launch of two new aircraft that will indeed serve our industry for years to come.