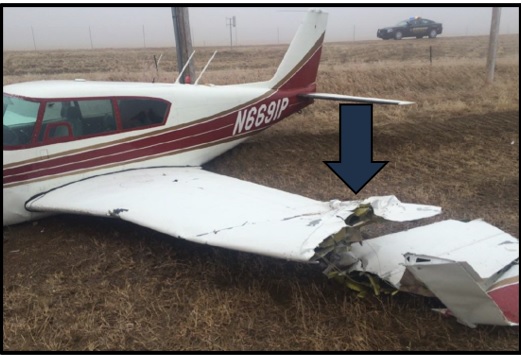 When an aircraft crashes, National Transportation Safety Board (NTSB) air safety investigators and aerospace engineers must determine if the event can be classified as an accident or an incident, as defined by Title 49 Code of Federal Regulations (CFR) Part 830.

“…an occurrence associated with the operation of an aircraft which takes place between the time any person boards the aircraft with the intention of flight and all such persons have disembarked, and in which any person suffers death or serious injury, or in which the aircraft receives substantial damage.”

“…an occurrence other than an accident, associated with the operation of an aircraft, which affects or could affect the safety of operations.”

Although the determination of an accident focuses on damage as well as injuries, here we will focus on damage assessment.

So, when assessing the damage, how do we decide what’s an accident and what’s an incident? When we’re first notified about an adverse aircraft event, we begin to assess the aircraft damage. NTSB investigators and engineers attempt to obtain as much information as possible about the damage. Sometimes we’re given information that makes it obvious the aircraft sustained substantial damage, such as the photos showing the extent of the damage (see Figures 1–3). Figures 1-3 show the substantial damage as indicated by the arrows.

Figure 1. A Cessna 170 airplane sustained substantial damage to the left wing, due to ground impact after an aerodynamic stall on takeoff in Arctic Village, Alaska.

Figure 3. A Piper PA-24-250 airplane sustained substantial damage to the left wing, after impacting a light pole during an instrument approach in Sturgis, South Dakota.

Other times, we can’t tell the extent of damage right away and we need to dig deeper. Figures 4- 6 illustrate this scenario and show the substantial damage as indicated by the arrows. For figure 4, additional information surrounding the circumstances of the object impact, a tracked drilling unit, along with the damage sustained to the main rotor blades was obtained from the Federal Aviation Administration (FAA) and the operator. For figure 5, the airplane’s structural repair manual for the damage sustained to the right wing from the bird strike was studied during the damage assessment process. For figure 6, the interior of the fuselage had to be inspected to identify the substantial damage sustained during the hard landing sequence.

Figure 4. A Eurocopter AS 350 B3 helicopter sustained substantial damage to the main rotor blades after impacting a tracked drilling unit in Delta Junction, Alaska.

Figure 5. A Cessna 208B airplane sustained substantial damage to the right wing due to a bird strike in Sacramento, California.

Figure 6. A Beech 1900C airplane sustained substantial damage to the lower aft fuselage after a hard landing in Gambell, Alaska.

When the damage sustained is not obviously substantial, NTSB air safety investigators and aerospace engineers may take additional steps to assess wreckage, such as the following:

Working with pilots, operators, mechanics, repair stations, FAA Flight Standards District Offices, aviation insurance adjustors, and aircraft recovery companies to obtain additional damage photographs or damage information
Consulting the airframe manufacturer’s air safety and engineering departments
Obtaining documents, such as the structural repair manual or illustrated parts catalog, from the airframe manufacturer
Considering other unique factors that may determine the damage level, such as airframe fire damage or the aircraft being immersed in a body of water
Inspecting the area in question (such as spars in wings, structural areas behind firewalls, driveshafts in helicopters, gearboxes in helicopters, etc.) once the aircraft is recovered
Removing components, panels, or skin and using tools to access hard-to-view areas (such as mirrors or electronic borescopes)
We would also determine:

if the damaged area is classified as a primary structure (primary structure is defined by the FAA as that structure which carries flight, ground, or pressurization loads, and whose failure would reduce the structural integrity)
what repairs are required
which components will be replaced to repair the damaged area
if the aircraft’s performance or flight characteristics were affected
(The cost or feasibility of repairing an aircraft, as determined by an aircraft insurance company, will not be considered when determining whether an aircraft has sustained substantial damage.)

Although the FAA is always a party member to our investigations, the NTSB is the final authority for determining a damage classification. For those that are involved in an adverse aircraft event, some basic knowledge can help during the assessment, such as:

Understanding the definitions and reporting requirements in 49 CFR Part 830
Knowing how to directly contact the NTSB
Having multiple, high-quality, high-definition photographs from all around the aircraft, showing the aircraft in its entirety
Having multiple, high-quality, high-definition photographs of the damaged areas, including close-ups
Knowing what repairs are required to the damaged area, along with what components will be replaced to repair the damage (when possible)
Being involved in an accident or incident, regardless of the outcome, is stressful for those involved. The NTSB works diligently with various stakeholders to provide as many answers regarding the damage classification as possible, whether it is determined to be an accident or an incident.