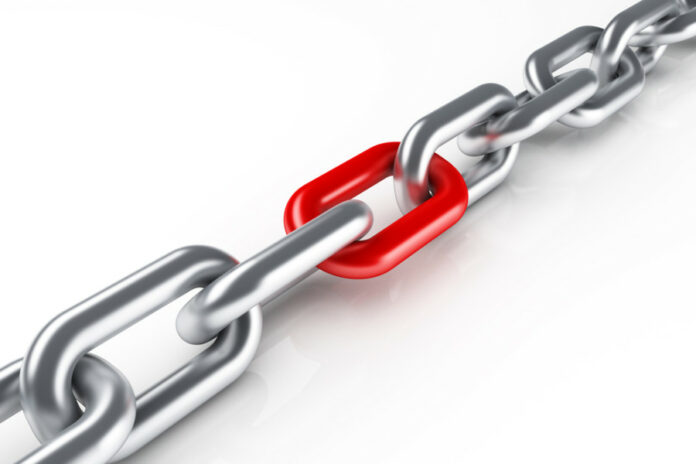 An oft-quoted maxim is that a chain is only as strong as its weakest link. Although this has a literal meaning – picture those huge links on the anchor chain of a large ocean-going ship – the figurative meaning usually applies to the people, technology, or administrative steps in a particular process. If any one of these is not performing up to the level of the rest, reduced productivity will be a direct result.

One of the clearest examples of the truth of that maxim has to do with a turbine-powered race car, specifically, the 550 HP P&W powered STP Paxton, designed by Andy Granatelli’s STP Division of Studebaker Corporation. The car was a phenomenal performer, easily beating piston-engine cars on both acceleration and top end.

Parnelli Jones, one of the top drivers of that era, qualified the car in 1967 for the Indianapolis 500, earning the sixth-starting spot. In the race, Jones took the lead on the first lap and was never worse than third. With three laps to go, Jones has a 52 second lead over the pack, when a $6 bearing in the gearbox failed, ending the dream of an Indy win for the team.

The first “space-age racing car” took three years and millions of dollars to design and build, adopting a wide range of leading-edge technology. But all for naught as the weakest link, in this case, was that $6 bearing. (Interestingly enough, shortly thereafter turbines were banned from the Indy 500).

A lot of owners/operators in the ag flying business can relate to this story. On the technology side, there are plenty of examples where links large and small can stop the action. You’ve got a new very expensive aircraft that can cover a lot of ground in a hurry, but the water pump on the mixing/loading rig fails just as you are about to load. The bearing in the fan pump fails the second you open the “money handle”. A tail wheel catches a sharp stone and goes flat.

On the administrative side of things, a work order misses a critical item about the organic farmer next door downwind from the field you are about to treat, with a resulting huge drift claim. And on the people side, fatigue sets in and an incident occurs (hopefully with just minor consequences).

I had one of these incidents a few years back when spraying a herbicide in wheat to control volunteer canola. I departed the airstrip for the field, and on my first survey of the field, it looked more like a canola crop than wheat. I rechecked the work order again and it seemed I had the right field. But I didn’t like the looks of things so headed back to the strip with the full load. The landing was no problem as the strip was plenty long enough.

Back at the mixer/loader, I told the owner what had happened. He said he knew the field in question, and it was “for sure” seeded with wheat. We even called the farmer who did the seeding and he again confirmed it was a wheat field.

So off I sent again back to the same location. I set up my A/B line along the east side of the road that marked the western boundary, started the first pass, and opened the booms. But just for a second! My “Spidey sense” was going off the charts! It just didn’t feel right!

Back to the airstrip, I went once again, but this time the owner was pretty agitated. At any rate, after a fairly heated discussion, we decided to drive to the field and meet the farmer there, as it was only seven miles away. So we did just that, and upon arrival, the farmer was standing in a field on the west side of the road that marked the field boundary i.e. just across the road from the field I had been about the spray. That field has been seeded in canola!

We had also brought along the work order which the farmer had prepared. “Well darn it!” he said after looking at it, “I guess I just got my east and west mixed up!”

For the rest of that season, every time I flew near that “for sure wheat field”, I could see a blank area about 45 feet wide and about 50 feet long that gave me the willies. The weak link in this chain just happened to be a farmer who was directionally challenged. The following are some suggestions for keeping the chain and its many links as strong as can be.

From a productivity point of view, the aircraft and pilot are just one of many links – albeit the most visible links – that go into making an aerial application operation a success. But from the time the office staff gets a call from a local producer to filling out a work order, mixing the right products at the correct rate, getting the work order to the pilot in a timely manner, etc., having well trained and motivated staff along a well-organized workflow is key to successful operations.

Ensure all your employees clearly know their responsibilities, which begins off-season with well-planned training sessions. Try not to micromanage, always looking over their shoulders, and along this line, encourage an open atmosphere where people can ask questions freely. It’s much better to hear about a small leak in the hull long before it becomes a major disaster.

Spend time and effort making sure the paper trail from initial contact with a producer to finished operation is in good order, and ensure it is user-friendly. Having a pilot or any of your team fill out reams of unnecessary paperwork is counterproductive to an efficient operation. Try to distill down to what information is really required for each trip. There are a lot of great publications available from your state and national aerial application associations that can really help in building a streamlined operation.

The record I’ve seen for not doing that happened a few years back when we were doing a forestry spray contract for a government agency. There was one form in particular with 22 blocks that had to be filled out each and every flight, plus, the forms had to be completed in triplicate at the end of the day/flight session. It wasn’t pretty.

Ensuring the right information gets to the right people at the right time is always a challenge, but even more so when things start to get busy. One field that is incorrectly treated by mistake not only hurts the bottom line but doesn’t do great things for the aerial applicator’s reputation. In particular, try to avoid last-minute verbal instructions such as “..start your application 15 swaths in from the west side.” It might work, and it might not, but is taking the chance worth it?

How to avoid weak links? Probably continue just what you have been doing. Being conscientious about your people and your equipment. Keeping spare parts in stock or knowing where you can get replacements in a hurry. And a self-audit once a year is also a good idea, again using any of numerous excellent state or national ag aviation association publications as your guide.

I will leave you with a Benjamin Franklin quote.

Make sure you have the nails – and the strong links – necessary for your aerial application business to succeed. It will always return great dividends along the way.