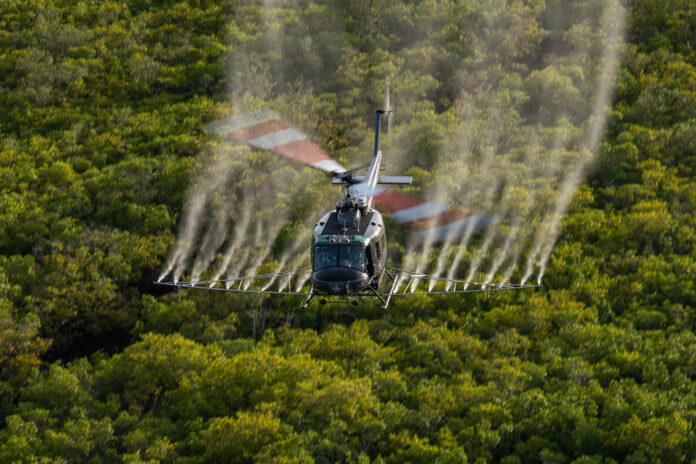 Charlotte County, Florida’s Sheriff’s Office (CCSO) has a history of thinking outside the box to get things done. The County’s Sheriff’s aviation unit has evolved from a traditional law-enforcement aviation unit to one that now supports the County to provide law enforcement support and aerial firefighting, search and rescue, and mosquito control services with their multi-role aircraft.

For several decades, Charlotte County had provided mosquito control services via ground application methods and employed a contract applicator for aerial operations. This changed in 2009 with the acquisition of a government surplus UH-1H helicopter by the County’s mosquito control division of the public works department, thus establishing a county-run aerial application program to augment ground-based operations.

Today’s aerial application division consists of two dozen staff during the peak periods; loaders, pilots, and staff tasked with the analysis of targeting which areas need to be treated from the public works department. Although the pilots in today’s aerial application operation now work for the Sheriff’s department, the maintenance and avionics technicians keep the aircraft in top shape.

Application strategies do not only involve the use of aerial application; they can also result in the dispatching of ground support operations to spray an area via a truck if the situation warrants it. The helicopter is dispatched to areas either inaccessible by land or to cover a wider area more timely than can be achieved by ground application.

Both larvicide and adulticide are primarily delivered wet; the County is experimenting with dry application of a granular product designed to break down over time that has an efficacy of two to three weeks, where the liquid application has an effectiveness of three to four days in the field. However, the granular-based product still needs further investigation before becoming a permanent part of the county strategy in mosquito control.

The County typically flies 300 or more hours a year just on mosquito control missions alone, which according to Schermerhorn, can vary significantly based on weather. If there is more rain in a specific year, the unit will be required to fly more hours for re-application based on mosquitoes’ accelerated growth after periods of heavy rainfall.

A majority of the flying the unit completes in the mosquito control mission is conducted at night under NVG’s, a peak time for mosquito activity and yields a more practical application; however, some flights are conducted at dawn and daytime treatment flights delivering larvicide application.

The practical application, technology and science behind mosquito treatment products in a county that spans 858 square miles with 178 square miles of that being water are by no means randomly chosen. Instead, Charlotte County relies on a large team of experts with decades of experience, backed by technology and data from the United States Department of Agriculture that drives a well-healed program led by Jeff Proffitt, who supervises the technology piece of the pie for the County. Supervising teams of Biologists and technicians who plan and execute mosquito control throughout the County rely on continual data collected throughout each year to effectively plan the County’s approach to application on the ground and in the air.

The Charlotte County aviation unit is now at full capacity with four aircraft, two spray capable Bell UH-1H Huey helicopters. The larviciding helicopter is fitted with dual-use firefighting and Isolair spray systems. The county-run UH-1H is set up for delivery of adulticide via rotary atomizers on the booms, with the other set up for delivering larvicide via standard nozzles. Adulticide is delivered at an application rate of 0.6 ounces per acre, carrying approximately 60 gallons per load. The larvicide is applied at a rate of 16 ounces per acre with a 300-gallon load per flight.

Although the County primarily concentrates on pre-designated spray zones, there will always be a need to deviate at times through notifications of high concentration areas by county residents, which is easily managed through the County’s partnership between the public works department and Sheriff’s Office and their highly coordinated joint management of the mosquito control operation.

In addition to field testing, the County’s biologists go above standard testing for mosquito treatment, going into the field to extract mosquito eggs that assist with calculating the volume of mosquito population per acre, which in turn, allows the loading crews to know what level of the mixture to add to the tanks for practical aerial application.

After the Sheriff’s office acquired two new AS350 helicopters, the existing UH-1H and the County-operated UH-1H, the agency’s chief pilot Shane Englauf suggested combining the county operations to encompass the Sheriff’s office taking over operational control of the second UH-1H. This involved repainting the aircraft to match the other and work from the agency’s avionics crew to continue adding an identical mission suite inside the aircraft that would allow for true multi-mission use of both aircraft when needed. However, the mosquito control aircraft is still used primarily for mosquito abatement work; it can also be used for aerial firefighting and law enforcement missions as situations evolve.

Charlotte County Government does, in effect, pay for all the services the combined aviation unit provides. The complexities of separate departmental budgets had previously been too much for each department to make work in an integrated environment. But, thanks to the overall commitment of the Sheriff, Fire Chief, public works department, and the Board of County Commissioners all working together through a departmental memorandum of understanding (MOU), along with a lot of time put in by Englauf and his staff to make it work, the operation has finally become a multi-mission success story by which others could base their multi-departmental process from.

The County’s aircraft are a mix of the very newest technology and some of the oldest. The UH-1H aircraft flown by the agency are more than 50 years old. Still, thanks to the high level of care provided and a comprehensive maintenance plan in addition to modern upgrades, the two older aircraft work perfectly alongside the very modern AS-350s the agency flies for law enforcement, SAR, and firefighting missions. Although in true form, each of the smaller aircraft can also be outfitted with spray systems, should there ever be a need for the smaller aircraft to participate in the aerial application process.

“Our mechanics Dan and Nathan have done an outstanding job in maintaining our aircraft; safety has just increased. We’ve never had backup engines before. Now we do, and all the electrical systems have been gone through from top to bottom. We wouldn’t be where we are today without them,” said Englauf of his maintenance staff members, who are also both certified avionics technicians as well as A&P technicians. Both Mechanics also function as crew chiefs on the aircraft when needed for any law enforcement, fire, or search and rescue operations.

Even though both pilots in the program are highly experienced pilots, Englauf, a decorated former Army pilot flying the OH-58D Kiowa in combat, and Jon Bautista, a veteran U.S. Marine and accomplished law enforcement pilot; Englauf ensures that adequate training is still provided for all aspects of the multi-use agency, including covering the aerial application aspect to ample NVG currency flights and specialized training on complex operations like search and rescue and firefighting. To assist with this, CCSO also employs external contractors that provide a great deal of their complex mission training and annual refresher training. CCSO has a long-standing relationship with Texas-based Brunner Aerospace, run by John Brunner, a former Air Force Colonel and Department of State pilot who now provides advanced training services to agencies around the country out of his base of operations in Georgetown, Texas.

The agency has recently hired a third pilot, he will complete his training and become operational next year, further augmenting the unit by providing additional pilot coverage when needed and increasing the agency’s ability to respond at a moment’s notice to anything within their vast mission requirements.

Unlike many aerial application operations that fly single pilot, for added safety, the agency flies aerial application missions with a pilot and TFO in the aircraft at all times. According to Englauf, while not traditional or typical, it adds a whole new level of safety by having a second set of eyes in the cockpit, not just for observing but to monitor systems onboard the aircraft and assist in the cockpit resource management. This lightens the load of the pilot in command and provides an advantage in increased situational awareness, which Englauf views as essential for ongoing safe operations.