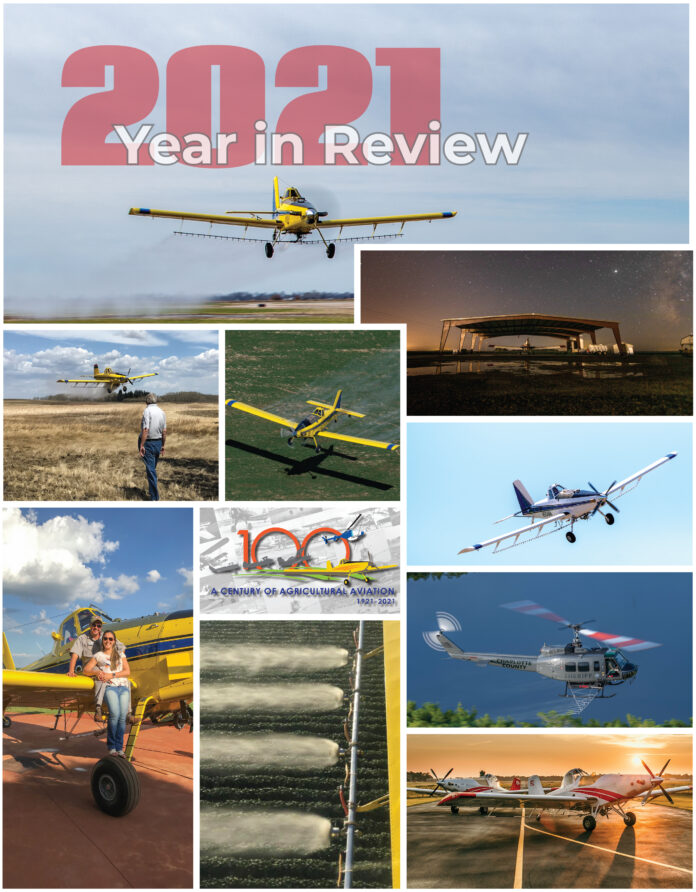 Each year, the December edition of AgAir Update is reserved for reflections on the past year of feature articles. Those reflections start with the January 2021 edition. This edition gives AgAir Update readers a look back at the 2020 NAAA Ag Aviation Expo. In the face of growing convention cancellations, the National Agricultural Aviation Association held a successful convention in Savannah, Georgia. In Savannah, it was as if things were back to usual, pre-covid. And, there were no adverse effects because of it. This was pre-vaccine days, too.

The February edition featured a look at a successful Canadian operator, Ken Kane Aerial, Ltd. Running an operation the size of Ken Kane Aerial – 17 ag aircraft, 36 airstrips, half a million acres or so treated every season, an army of personnel including pilots, mixer/loaders and office staff – is a handful in anyone’s book. Ken went from a single J-3 Cub to turbine Air Tractors. The article goes on to explain how Ken grew the business and created a favorable work environment. According to Ken, his success story “wasn’t anything complex or fancy, just common sense.”

Four Decades of Excellence in Canada

The March edition was a ‘Bottoms Up’ story about Arkansas operator Brandt Bottoms. From his years in Junior High, Brandt wanted to fly ag while working for his grandfather, Melvin Grimes, loading his ag planes until going off to Flying Tiger flight school. Today, Brandt realizes his dream, operating and flying an AT-602 treating primarily rice and cotton.

As spring approaches, the April edition featured two Brazilian partners, Jorge Humberto Morato de Toledo and Rodrigo Fernandes, based in Såo Paulo State. Jorge and Rodrigo own Imagem Aviação Agrícola. The company is very different from ones found in the United States and other non-Latin countries. It operates seven turbine Air Tractors and six Ipanemas. To service this large fleet of ag planes, Imagem has 15 service trucks.

The primary crop that Imagem’s aircraft treat is sugarcane. Half of Imagem’s clients are from China, who own four sugar mills managed by Brazilians. Treatment rates vary with 3 to 4.5 gpa for sugarcane and one gpa for cotton. The company also is involved with firefighting using its AT-802.

Air Tractor has always been a strong player in the ag aviation game. The May edition celebrates the delivery of the 4,000th Air Tractor, a 502XP. The new owners, Mike and Tiffany Rivenbark of Moore’s Aerial Applicators based in Morehead City, North Carolina were on hand at the Olney, Texas factory for the barbeque luncheon celebration. Also present for the delivery were Air Tractor dealers Grant and Logan Lane, along with Air Tractor President Jim Hirsch and 295 Air Tractor employees plus several dignitaries and VIPs.

Milestone 4,000th Air Tractor is a Bird of a Different Color

It may sound like a ranch name, but Flying W Aviation is a spraying service in the Northwest Panhandle of Texas. The June edition of AgAir Update spotlights Clay Waldrip in a story about how he started on the ground at the same airport that Flying W is based in Dalhart, flying for the same growers whose crops he tended as a teenager. Operating an AT-802 and AT-502B, the company flies in three states; Texas, Oklahoma and New Mexico.

From Texas in the June edition to Kansas in the July edition, AgAir Update visits the well-established (1984) Tony’s Flying Service in Great Bend. In 2013, the flying service acquired a new owner, Jeff Seawald, having bought the company from longtime owner and founder Tony Martinez. In the article, Jeff explains the difficulties a low ag-time pilot faces trying to find a seat. Having found one with Tony’s Flying Service in 2011, in two years Tony was ready to retire and who else but Jeff to respond to the opportunity. The rest is history with the company operating two AT-502s and an AT-402.

In the September edition, AgAir Update recognizes the importance of low volume applications and explains how these types of applications are made in Brazil. There has been a “revolution” in the South American country towards the almost exclusive use of rotary atomizers. Typical applications are made at one gallon per acre (10 liters/hectare) and many at much lower rates. This is true regardless of the type of aircraft, from Ipanemas to AT-802s. Comments such as this from Brazilian operator Caio Balzan demonstrate the successes of low volume applications. “We are now able to achieve a wider swath and a higher quality droplet spectrum when compared to conventional hydraulic nozzles.”

The October edition announces two, new Thrush aircraft about to enter the marketplace, the 510P2 and the 510P2+. The article describes how Thrush embraced the design success of the 510G utilizing its airframe and improved engineering. The 510P2 uses the PT6A-34AG and the 510P2+ has the PT6A-140AG turboprop engine, boasting 750 and 867 shp, respectively. Both aircraft come with a 4-blade prop designed for the installations.

Featuring a helicopter on its cover, the November edition tells how the Charlotte County, Florida Sheriff’s Office (CCSO) has a history of thinking outside the box to get things done. With four helicopters in its fleet, two UH-1H Hueys and two Airbus AS-350s, the county’s sheriff’s aviation unit has evolved from a traditional law-enforcement aviation unit to one that now supports the county to provide law enforcement support and aerial firefighting, search and rescue, and mosquito control services with their multi-role aircraft.

Be sure to scan to the QR code beside each article to look in depth at the photos that accompany each feature. 2021 was a great year that took AgAir Update all over the world writing about ag aviation. 2022 has even more in store! If you’re not a subscriber, visit agairupdate.com (or scan the following QR Code) and ensure you don’t miss out on all that is ag aviation in AgAir Update!