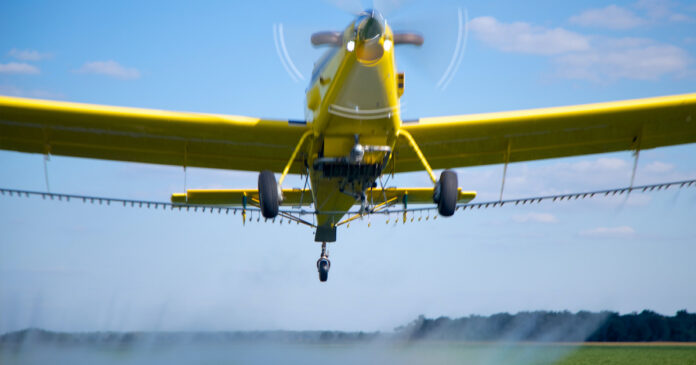 Editors Note: This article originally appeared in the August 2005 edition of AgAir Update, and was brought back to our attention by our friends in New Zealand as a great refresher. The opinion of this author does not necessarily reflect the opinion of AgAir Update. It should be noted that lowering flaps before takeoff may be a safer practice, as per the following accident reports. However, it does not preclude that lowering flaps midway during a takeoff roll will reduce the takeoff distance. What is your opinion/experience? Write aau@agairupdate.com.

During an investigation into an Air Tractor accident, I stumbled upon a departure procedure that is commonly used as standard protocol among ag-pilots during the departure phase of flight. Never hearing of such procedures, I reviewed historical accidents and have found this procedure may have been a contributing factor in several different accidents.

The first accident that instigated my investigations into these departure procedures occurred while the pilot was attempting to depart in his Air Tractor 502A on a grass strip that stretched about 2,000 feet long, with trees located at the end. During the takeoff roll, as the airplane’s groundspeed increased, the pilot extended the wing flaps just prior to rotation and configured the airplane in a nose high attitude. The airplane lifted off the grass surface, but the wing flaps failed to extend. The airplane climbed to about 15 feet and impacted the trees at the end of the strip. When I queried him as to why he waited to extend the flaps, he told me that his standard takeoff procedure consisted of starting the takeoff roll with the wing flaps in the retracted position, and continuing in that configuration until rotation. Upon rotation, he would start the initial climb by pulling back on the control stick, while simultaneously lowering the flaps to the extended position in attempts to yield a shorter takeoff roll.

Despite the possible mechanical issues with the flaps, if the pilot had extended the wing flaps prior to the takeoff roll, this accident could have been prevented. A review of Air Tractor’s Airplane Flight Manual, disclosed that the procedure for a short field takeoff consists of lowering “flaps to 10-degree position (first mark),” although it does not specify when the flap extension should occur. After reading this ambiguous procedure, I decided to interview several other pilots in the industry. Surprisingly, many of pilots I questioned did use this departure procedure. The reasoning behind doing such a departure is based on their belief that keeping the wing flaps retracted at the beginning portion of the takeoff roll reduces drag and therefore, decreases the airplane’s takeoff distance.

Being suspicious of such claims in increased takeoff performance, I spoke with an Air Tractor representative who confirmed that not only was this takeoff procedure improper, but the theory behind making such a departure is untrue; the drag created by the wing flaps is negligible during this phase of operation, and will not decrease the takeoff distance by a measurable amount.

As most Air Tractor’s are a restricted category airplane, the company does not have any flight test data computing the drag of the flaps during takeoff. After struggling through a pile of aerodynamics texts, and consulting with various aerodynamicists, I discovered that the change in drag of the wing flaps on takeoff roll is insignificant to the takeoff performance. Rather, the following parameters will drastically affect performance in the takeoff roll:

2.) Ground effects – during a ground roll, the aerodynamics of the airplane is altered somewhat considerably by ground effects.

3.) Flight characteristics- airplane’s acceleration (change in acceleration rate), speed, angle of attack, winds, and so forth; meaningful drag calculations would be problematic without this specific data.

Without this information, a pilot is not able to accurately deduce the takeoff distance performance differences when using the departure procedure as opposed to leaving the flaps partially extended as the manufacturer recommends. It seems that instead of attempting this potentially unsafe departure procedure on the basis of an unproven theory of takeoff performance, the pilot would be better off making sure the airplane’s tires are properly inflated, wheel bearings are adequately lubricated, acceleration rate is done for maximum performance and other conditions mentioned above are favorable.

In short, during departure operations, wings flaps should be extended prior to takeoff roll. Specifically, extending the wing flaps during the takeoff roll is not a safe practice and could potentially result in an accident, wrecking your airplane and hurting yourself.

LAX03LA180—The airplane collided with trees while departing from a private grass airstrip. The pilot’s intended departure surface was a grass strip that stretched about 2,000 feet long, with trees located at the end. The pilot reported that his standard takeoff procedure consisted of starting the takeoff roll with the wing flaps in the retracted position, and continuing in that configuration until rotation, where he would he would start the initial climb by pulling back on the control stick while simultaneously lowering the flaps to the extended position. Following his standard procedure, the pilot applied full engine power and the airplane started the takeoff roll down the grass strip. As the airplane’s groundspeed increased, he extended the wing flaps and configured the airplane in a nose high attitude. The airplane lifted off the grass surface, but the wing flaps failed to extend. The airplane climbed to about 15 feet and collided with tree branches, subsequently impacting terrain. During an examination of the cockpit, a Federal Aviation Administration inspector observed the flap circuit breaker to be in the “out” position.

The pilot’s inadequate preflight/pretakeoff procedure by not lowering the wing flaps, which resulted in reduced climb capability upon experiencing a flap system malfunction.

LAX04LA275—The airplane collided with high vegetation and terrain during the initial climb from a dirt airstrip on an agricultural application flight. Prior to takeoff, the pilot failed to lower the wing flaps to the 10-degree setting that he had utilized on his previous takeoffs from the airstrip. While on the takeoff roll, the pilot realized that he had not configured the airplane with the flap setting he was accustomed to using, and he attempted to extend the flaps. Despite his attempts, the flaps remained in the retracted position for undetermined reasons. With about 20 feet of runway remaining, the pilot attempted to re-lease the load. However, he failed to deploy the cargo dump handle. The airplane lifted off the runway but was unable to gain enough altitude to clear the nearby five to six-foot tall corn crop. After impacting the corn, the airplane stalled, impacted the ground and cartwheeled three times before coming to a stop inverted.

Probable Cause: The pilot’s inadequate preflight/pretakeoff procedure by not lowering the wing flaps, which resulted in reduced climb capability upon experiencing a flap system malfunction.

FTW92DRD03—The pilot was attempt-ing to takeoff from an agricultural airstrip while loaded with chemicals when takeoff speed could not be attained. The temperature was approximately 90 degrees when the accident occurred. He attempted to lower the flaps to the takeoff position before he went into the area beyond the end of the runway. The airplane struck trees and came to rest near a nearby road. The pilot stated the flaps would not lower during the takeoff roll. The FAA coordinator examined the flaps and found them functional. Probable Cause: The pilot’s failure to lower flaps to the takeoff position.