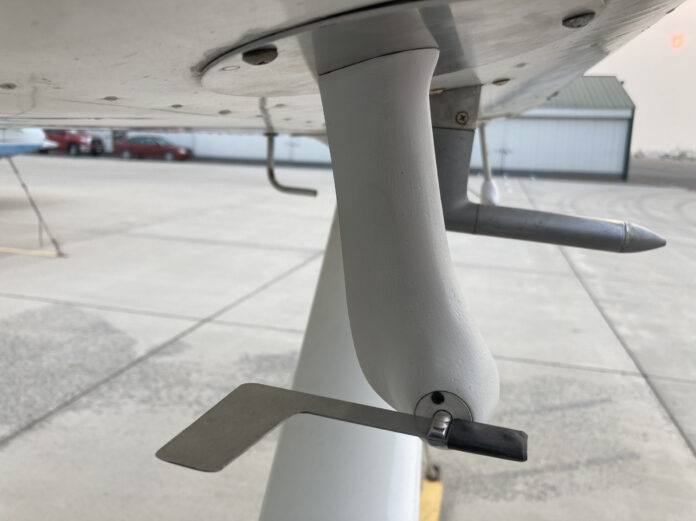 It is estimated that 75% of fixed-wing agricultural flying accidents occur in the return to target maneuver (RTT). Pilots often do this turn aggressively. Application efficiency can be attained, but the bottom line is, these turns are exciting. Who amongst us doesn’t enjoy doing lazy eights just for fun? So what goes wrong? In a steep climb, the pilot may exceed a safe angle of attack and at the same time add improper rudder, which results in a stall. Often one wing stalls and causes a snap roll and fatal spin. You would never see an eagle accidentally do this. The nerves in their wings are so sensitive to the air over their feathers that they always know if they are flying at Vy, Vx, or close to stall. They do not rely on their eyes or ears for detecting their angle of attack and inclination. They feel it!

We are living in the future. Technology abounds! Could our modern technology allow us to create a device that gives any pilot the “feel” a bird has for the wind over his wings? Such a device was recently developed, patented, and is now on the market. It is called the FeelFlight Grip.

1. Such a device would convey a “feel” of aircraft attitude.

This is attained with pulsing pins in the control grip, called “haptic feedback.” The human fingers are the most touch-sensitive place on our bodies. The pilot can now feel his angle of attack (AOA) and inclination at all times.

The hand on the grip receiving the haptic feedback controls the airplane’s AOA. The old technology is visual instruments and audible warnings. However, visual and audio feedback is processed through the brain. This takes valuable time. By contrast, with FeelFlight, the pilot’s index finger is on the stall warning pin. When he receives an imminent stall warning, the response is immediate. It is a reflex. No processing by the brain is required. We are talking milliseconds. In addition, the pilot’s senses are heightened because he is highly aware that he has entered a dangerous maneuver. When the index finger is signaled, the pilot’s reflex is to push forward on the stick – instantly!

To fly safely, coordinated turns must be maintained. An inadvertent stall in a skidding turn results in a spin. The FeelFlight system signals inclination. This is identical to the ball instrument. Modern microchip technology provides an accelerometer sensor that detects inclination instantly. Flying with the FeelFlight system demonstrates the immediate response compared to the slow lag in the old “ball- in- the- fluid” instrument. Pulse pins on the left and right sides of the grip signal the pilot to step on the rudder.

4. Angle of attack and Vx

The angle of attack is the required data for maintaining safe flight. It is always constant regardless of weight and balance, density altitude and wing bank. By contrast, the POH performance velocities vary significantly. In our new future, airspeed is obsolete. With the FeelFight Grip, the middle finger receives the AOA signal for Vx. This is generally described as the velocity, or more appropriately – AOA for “best angle of climb.” Significantly, it is also the AOA where the airplane has entered the backside of the power curve. A discussion of the critical aspects of the “backside of the power curve” is required. Say you are flying at Vx, and the power is set for level flight. If you pull back, you slow down even more, and the aircraft now requires more power to maintain level flight. This is often referred to as the “region of reverse command.” We instinctively believe that more power will make us go faster. This is true on the front side of the power curve. Perhaps the best way to visualize why slow flight requires more power is to think of the airplane as “plowing” through the air. Vx deserves deep respect. It will give you the best angle of climb for clearing a power line. It is also the optimum AOA for carrying a heavy load to the designated field.

Another example is if you were in a steep valley surrounded by big mountains and climbing to get above the peaks, Vx is the AOA you should maintain. If you found yourself close to a mountain and trying to climb steeper than the mountain slope, your instinct would be to “pull back” to increase your angle of climb. Even at 120 mph, that would likely result in a stall, and you would travel horizontally out of control into the mountain. These concepts become fuzzy when we rely on audio and visual signals and instinct. The power of haptic feedback makes the pilot reaction more definite and automatic. Vx is now not an obscure aviation reference but a significant AOA value for maximum efficiency in flight missions such as aerial application. And with FeelFlight, the airplane tells you by pulsing your middle finger.

5. Must be easy to calibrate.

We hear many pilot complaints about the difficulty of calibrating their AOA instrument. The FeelFlight could not be easier. The three AOA outputs are also broadcast with LED lamps in the control module mounted in the instrument panel. Next to each lamp, there is a push switch. It is slightly recessed to prevent accidental pressing. To calibrate Vy, simply trim for this velocity and press the corresponding switch with a pen or pencil. Repeat for Vx and imminent stall. It is that easy.

A precise measurement of AOA is essential. FeelFlight uses the vane type of sensor because this is a direct measurement of AOA. The vane turns a magnetic encoder accurate to 1/20 of a degree. In addition, this encoder is weather resistant and extremely reliable.

Often in equipment such as construction machinery or medical equipment, you will see a warning light blink and accompanied by a synchronized audible beep. This is referred to as “dual-modality.” It greatly enhances the human response to a warning signal. The FeelFlight has the ultimate in modality. It broadcasts visual and audio signals for Vx and imminent stall and “haptic” … the sense of touch. This is a triple sensory modality and is extremely effective. When approaching an imminent stall, the system beeps, blinks, and pulses your index finger to warn you. And these three signals are synchronized with the same pulsing pattern. It is nearly impossible to ignore.

These are the seven mandatory criteria to develop the maximum effective instrument for avoiding loss of control. FeelFlight, Inc. has developed such an instrument. It was born from our primary mission – to save lives. 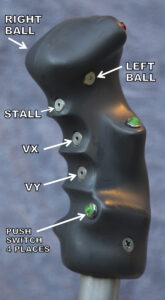 The FeelFlight Grip has five haptic pins to signal the pilot. In addition, there are four customizable switches. The top switch is often replaced with a four-way trim switch. Note: when the pilot is flying within safe margins, the haptic pins are inactive with no feedback to the pilot. 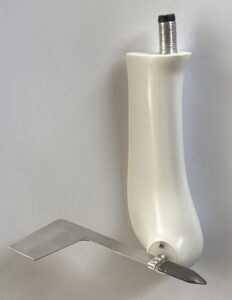 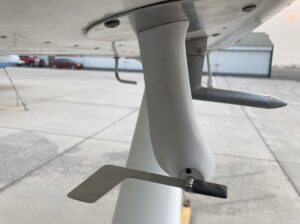 FeelFlight uses a vane type of sensor. The magnetic encoder has an accuracy of 1/20 degree. This precision is required for discrete Vy and Vx feedback. 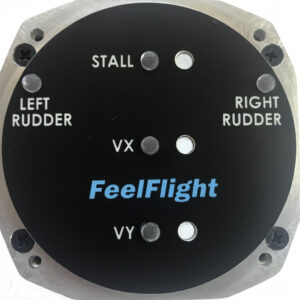 The FeelFlight control module has three vertical LED lamps that signal Vy, Vx, and stall. These values are easily calibrated by pressing the accompanying recessed switch. There are also left and right LEDs—these signal inclination. 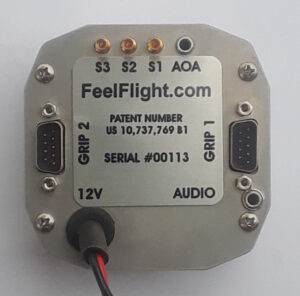 The back of the control module has the inputs and outputs. The FeelFlight will power two grips. In addition, the switches on the grip are easily connected to your device (PTT, etc.) by the brass connectors labeled S1, S2 and S3. 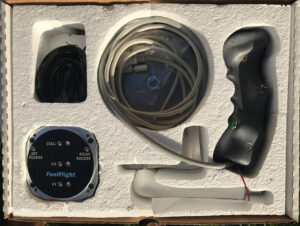 The basic FeelFlight kit comes with everything required to install one FeelFlight Grip. This includes hardware, cables, and a heavy gauge inspection plate for mounting the AOA sensor.