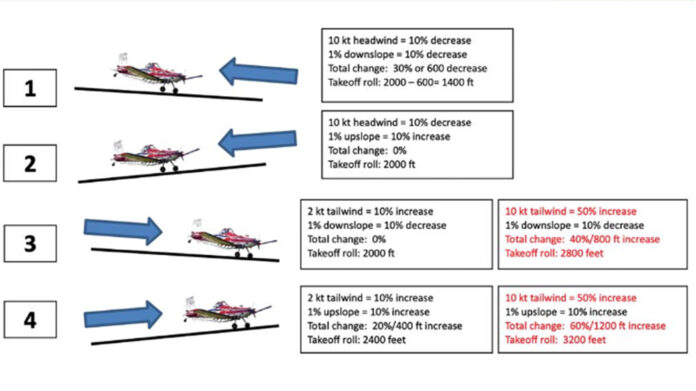 One of the most spectacular aviation incidents I’ve ever witnessed occurred a few years back when I was flying off a farmer’s packed dirt strip oriented north/south, with a 1-degree gradient, the southern end being highest. I was flying a Thrush S2R, and a friend was flying an M-18 Dromader with the loading area on the north end.

We had been flying all morning with calms winds, but they had quickly increased to around ten kts from the south when the incident occurred. That meant the choice was to take off uphill into a headwind or downhill with a tailwind. How many exams have I written where there were questions based on the same scenario, i.e., which is the best way to takeoff!

At any rate, I had taken a light load to get the feel of things and had planned on taking off southbound into the wind and had taxied out behind the fully loaded M18. I thought he would do the same I had planned, i.e., taking off into the wind, but to my surprise, he taxied south down the entire length of the runway, swung around, and cranked up the 1000 HP PZL radial to full throttle headed in my direction.

I was still looking at my maps and work order when my head came out of the cockpit just in time to see the Dromader at the very end of the strip, but with the mains in the air and the tailwheel on the ground. I cannot remember ever seeing an aircraft in that position before. Just off the departure end of the strip was a small valley, which he promptly disappeared into. I recall thinking that nothing good could come from this.

A half-second later, I saw what I first thought was a massive explosion in the direction of the departing aircraft, followed seconds later by the sight of the aircraft plowing into the soft upward sloping field on the other side of the valley, quickly coming to a stop.

I shut down, hopped out, and started heading in the direction of the grounded M18. The other pilot had also shut down and was climbing out, so my excitement came down a few notches, knowing he wasn’t hurt. Luckily the aircraft wasn’t damaged, and with the farmer’s tractor, we towed it back to the loading area.

The following day was fix-it time. The huge ‘explosion’ I had seen was the entire load being unceremoniously jettisoned from the aircraft, as the impact on the far side of the valley had burst open the hopper gate, with all 800 gallons pounding into the field and ricocheting upwards. As we sat under the M18 repairing the hopper gate, the conversation naturally turned to what had happened the previous day, with the discussion focused on the combined effects of wind and runway gradient.

In ag work, it is not uncommon to fly off a runway with a noticeable gradient, so the uphill/downhill choice is often called into question. Ideally, we would like to takeoff downhill as gravity would increase the acceleration and land uphill, with gravity providing a greater deceleration.

What to do when you work off an airstrip with a gradient? Start with three rules of thumb:

A 1% gradient results in a 10% change in takeoff roll (uphill adds, downhill decreases)
10 knots of headwind decreases ground roll by 10%
10 knots of tailwind increases ground roll by 50% (10% for every two kts)
Before getting into the actual numbers, a word of caution. A rule of thumb is a means of estimation made according to a rough and ready practical rule. So they are an excellent place to start when you don’t have exact measurements but are to be used with care.

If the zero wind takeoff roll on a level airstrip is 2000 feet, the following scenarios illustrate a combination of winds and gradients and how they collectively affect takeoff roll. Blue arrows indicate wind direction.

Figures 1 and 2, both with headwinds, would be suitable options. However, with options 3 and 4, the devilish nature of tailwinds is illustrated. Not too bad when light, but once they get up, they add a whopping number to the takeoff roll.

The strip we were using was 2600 feet in length, so option 4 was really out of the question. But option 3 with a 10 kt tailwind, which my friend utilized, was not a lot better. The overall 40% increase (800 feet) now put the ground roll theoretically at 2800 feet, which was not a great option given the actual runway length.

If the downhill slope in figure 3 was 2%, would that have been better? Not a lot, as while the slope would have decreased the takeoff run by 20%, the tailwind factored in gives a net increase of 30%/600 feet, for a total of 2600 feet ground roll. Things would be a bit tight, to say the least.

When we discussed what had happened, my friend said that he misjudged the wind velocity, as it has come up very suddenly. Good rationale to have a portable windsock to keep everyone in the know.

If you are sent to a new airstrip where you don’t know the gradient, taxi to one end and read the altimeter, then to the other end and do the same. Dividing the difference by the runway length will give you the gradient.

The moral of the story is that tailwinds can make for a bad day, all else considered. If you are looking at takeoff options and are not certain which would be the best, it’s time for a light load to test things out, or even better, to shut the operation down until things settle down.