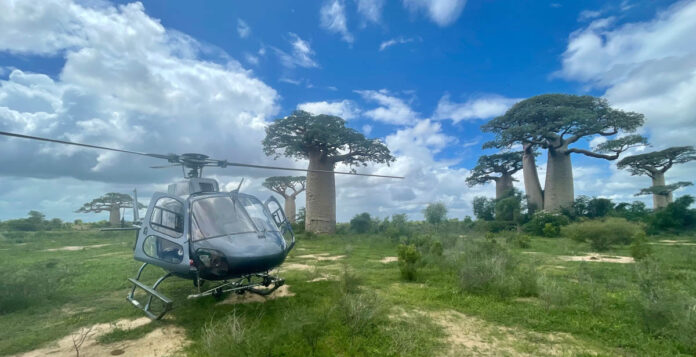 In April 2021, Madagascar observed an increase in the locust population, “Locusta migratoria capito?, and a locust control intervention program was quickly established. “Preserving the food security of the populations is the main objective,” according to  Catherine Constant, the FAO coordinator on site (Food and Agriculture Organization, a branch of the United Nations). Badr Edine accompanied her to carry out this laborious mission. The sponsor and coordinator of operations were the FAO with the agreement and support of the Malagasy Ministry of Agriculture. The main sponsors of this program are the German government and the World Bank, plus donations from the Kingdom of Morocco and other partners have also helped with the funding.

This year, the risk of an explosion of locust swarms, mainly in rice fields, is extreme. The best solution is locating the locust bands and eradicating them before they turn into vast swarms of reproductive adults. Level Up, a Kenyan company, has provided aerial spraying for Madagascar since December 2021 and should extend until June 2022. The last major locust campaign in Madagascar was 2014-2016.

Locust Control in Madagascar
1 of 25

Fellow pilot Olivier Pascual and I carried out the delivery in December 2022 of two Level Up aircraft on a flight from Nairobi to Tulear in Madagascar, a challenge at all levels; administrative, meteorological, and a sea crossing of several days. The journey required stopovers in Mombassa (Kenya), Dar Es Saalam and Mtwara (Tanzania), Moroni and Mayotte (Comoros), Mahajanga (Madagascar).

It is interesting to note because of the lack of road infrastructure, the helicopter, for both our travel and for spraying during this operation, provided a tremendous advantage. The roads are in poor condition and regularly damaged by tropical rains. In February 2022, two cyclones spaced 15 days apart (Batsiraï and Emnati) interrupted the mission for seven days. To make this 1000 km trip by land would typically take three long days in a 4WD vehicle. The secondary road network is only possible with a 4WD vehicle. It is easy to understand that the use of the helicopter is essential to quickly identify the development of the locust swarms and ensure precise interventions.

Manja, where the camp is located, takes nine hours of travel in a 4WD vehicle to reach the airport of Tulear, where Jet A1 is available. To mitigate this challenge, we bought JetA-1 and pumped it into five barrels of 200 liters (52.3 gallons) each. The 6×6 truck, with a 12-ton empty weight normally reserved for this mission, was temporarily unusable. This was because halfway, the road crosses the Mangoky River. To continue on the road, a ferry must be used with a maximum load limit of only 10 tons. The price of fuel and chemicals delivered is costly. Attempting to complete this mission by land would be a monumental task. Thus, helicopters are used for these two distinct missions:

Scouting the locust population is done with the support of the IFVM (Ivotearana Famongorana Valalaeto Madagaskara), the driving force for the fight against locusts of Madagascar. I flew agents of the IFVM, who directed me to inspection sites where it was confirmed, either by prior information or by various landings, to areas known historically for traditional egg-laying, development, and the formation of locust swarms.

The helicopters that Olivier and I use are AS350 B3 Ecureuils (or Squirrels) equipped with AgNav GPSs. The spray systems are a Simplex unit on one and an Isolair unit on the other, each with four Micronair 5000 atomizers mounted on the skids. ULV applications are made at one-liter/hectare applying Chlorpyrifos 240 ULV using 100-meter swaths. This allows the chemical to reach mature locusts capable of flying. Teflubenzuron 50 ULV is used for treating developing larvae with a swath of 100 meters spaced every 400-500 meters. The larvae travel on the ground and eventually reach the treated strip, allowing for a good compromise between maximum targeting and pesticide savings.

Sometimes, we use Cyclone, a mixture of organophosphate with 20% pyrethroid, to ensure an initial contact and delayed action. The treatment takes place early in the morning. The spray areas are defined by scouting the previous day. Applications are made before hot, daytime temperatures trigger the flight of swarms. For environmental reasons, buffer zones are used around urban areas, rivers, etc.

Sometimes days can be intense with spraying in the morning and scouting in the afternoon. Also, our mechanic and his entire team inspect and make any necessary repairs and adjustments to the spray equipment daily.

A locust control campaign is inevitably expensive and time-consuming to prepare and make plans many months in advance. It is a real feat to estimate future pesticide needs on Malagasy territory considering the manufacturer is located in another distant country. The treatment areas are guesstimates derived from the previous locust campaigns and the present larvae level (an omen of future infestations). Transport logistics are complicated, considering the number of active ingredients available and the needed administrative authorizations for use.

For camping in the bush, support logistics are vital. One helicopter requires the following:

Every 5-20 days, the camp changes locations, constituting a genuine expedition for everyone. Currently, two campsites are operating this way during this locust swarm control. Everything is being done to ensure the common goal: food security for the Malagasy population.