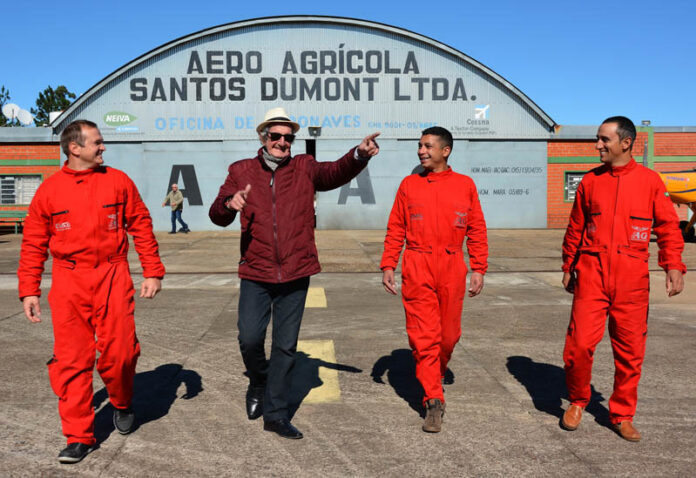 Laudelino Bernardi was a legend in South American ag aviation. He was responsible for training over 1,000 agricultural pilots and played an integral role in advancing agricultural aviation south of the Equator. His influence extends to this day. Here is his story.

Laudelino Bernardi was born October 3, 1940, in Tuparendi, northwest of Rio Grande do Sul (RS), Brazil. His paternal grandfather, Ferdinando Bernardi, came from the Treviso region of Italy around 1865. His mother, a municipal teacher in Rio Grande do Sul, separated from her husband when Laudelino was still a child, taking the children to live with her. Being the eldest of nine children and at just nine years old, Laudelino helped his mother raise and support his siblings from childhood through college. His efforts were not in vain. Today, all brothers have completed higher education and are dentists, teachers, psychologists and bank clerks.

Bernardi was a student, a professional musician (he helped to found the band “OS ATUAIS,” which still exists today), and a football player. Bernardi graduated in accounting and later became a professor. In the 1960s, he joined Banco do Brasil as a bank clerk and lived in several cities in the northwest of Rio Grande do Sul, such as Três Passos, Três de Maio, and Santo Ângelo.

At the end of the 1960s, Bernardi married Venina Maria Bernardi, then a civil servant. In the early 1970s, their only child, Pelopidas, was born.

In the 1970s, Bernardi joined the civil aviation world by taking Private, Commercial, and Flight Instructor courses. He then went through all the management positions to become the president of the Aeroclube de Santo Ângelo, RS. Mr. Bernardi was responsible for the modernization and acquisition of many new aircraft, the construction of office buildings and accommodations for the aviation college, and establishing professional training for hundreds of aviators who today fly with the airlines, commercial and agricultural aviation. Later in his career, Commander Bernardi remained active on the board of the Aeroclube de Cachoeira do Sul, RS as a tax advisor, where he also graduated as a Glider Pilot in the early 1990s.

In the mid-1970s, together with aviation activities, Bernardi performed at Aeroclube de Santo Ângelo, RS, and professional activities at Banco do Brasil. He graduated with a law degree from the Faculty of Right of Santo Ângelo, RS.

At the end of the 1970s, Bernardi started his career as an agricultural pilot, taking the CAVAG course (agricultural aviation course) in São Paulo state, in the city of Sorocaba at CENEA, the National Agricultural Engineering Center. After graduating, he decided to start his own ag aviation business. He resigned from Banco do Brasil and founded Aero Agrícola Santos Dumont, Ltda.

Bernardi established his ag aviation career before the vast implementation of agricultural aviation in Brazil, mainly in Rio Grande do Sul. This was when today’s modern aerial application techniques by plane were not available, at a time when farmers had no chance to save their crops from pests other than by using agricultural aviation.

Leading the way, Mr. Bernardi has always been a pioneer in agricultural aviation by utilizing the most modern techniques and new equipment. His company, Aero Agrícola Santos Dumont, was the first in RS to use GPS guidance in the 1990s, eliminating the need for flaggers.

Mr. Bernardi built hangars and installed ag operations in Santo Ângelo, Passo Fundo, Tupanciretã, São Sepé, São Gabriel, Rosário do Sul, Alegrete, São Vicente do Sul. The company had around 12 Embraer Ipanemas, and Cessna C-188s serving from the center to the west of Rio Grande do Sul, responsible for aerial rice planting, fertilization with urea, and applying the necessary pesticides to save the Gaucho region’s crops. The company treated almost half a million acres per year.

In the mid-1980s, with Mr. Bernardi’s excellent relationship with the city, he decided to settle permanently in Cachoeira do Sul, RS. Here, he chose to build the largest hangar in the region, capable of housing 12 ag aircraft. All facilities were approved by ANAC, certified by MAPA (Ministry of Agriculture and Livestock), and environmentally licensed by FEPAM (State Foundation for the Environment). The company is a pioneer in complying with legislation protecting the Brazilian environment, being a model for universities, colleges, and agricultural educational entities.

Aero Agrícola Santos Dumont, Ltda. became the only authorized aircraft maintenance center in the region with ANAC (National Civil Aviation Agency) and remains the only approved facility in the area. The workshop is a division of the company and is dedicated to maintaining the company’s fleet within the strict standards of ANAC’s maintenance and control manuals. Since then, the company has also been engaged in aircraft, parts, and component sales. Commander Bernardi was certified as an Aircraft Maintenance Technician with CREA/RS – Regional Council of Engineers and Architects and ANAC (US A&P/IA equivalent).

At the beginning of the 1990s, Mr. Bernardi decided to implement the first private agricultural aviation school, CAVAG, in Brazil. To this day, it remains one of the most reputable schools in Brazil. Commander Bernardi was appointed an ANAC-accredited pilot examiner, becoming a regional aeronautical authority. With Brazilian and world agriculture growth, CAVAG has trained over 1,000 ag aviation pilots from Africa, Angola, Europe, Spain, United States, Dominican Republic, Colombia, Bolivia, Ecuador, Panama, Costa Rica, Argentina, Uruguay, and Paraguay.

A moment that sums up the importance of the man who became a legend in Brazilian ag aviation occurred in 2015 when Bernardi was awarded the Medal of Merit Santos Dumont, an honor reserved for a select group of professionals who have provided outstanding services to the Air Force. Here is a brief excerpt from his testimony at the time: “Everything I did in aviation and will continue to do has always been due to the magnitude of the art of flying, of being able to transmit to idealists what little I know, the desire to feel useful to my fellow man. I am convinced that I have always planted good seeds and will continue to do so, as long as Aviador Maior gives me strength and support.”

Author Juliana Ap. Turchetti Coppick, when she graduated with the LX class of CAVAG in July 2013.

Pelópidas, Bernardi’s son, in addition to being a trained aviator, is also a businessman and owner of PBA Parts, which sells aircraft and aeronautical parts. His wife, Roberta Bonamigo Bernardi, is the administrative and financial supervisor of PBA’s activities. Commander Bernardi’s grandchildren, young Pythagoras (16) and Penelope (13) are already training as aviators.

Cmte. Laudelino Bernardi’s example of dedication and love for aviation will forever remain in the memory of those he interacted with.

Author’s Note: I graduated as an agricultural pilot at Aero Agrícola Santos Dumont in class number 60 (LX) in 2013. I remember this period as one of the most intense and challenging of my career. On my graduation day, Seu Bernardi (as we used to call him) gave me a firm handshake and said, “Girl, you won a game. Congratulations!”  We kept in touch, and he had promised to provide me with the honor of telling his story for AgAir Update’s column, Lendas Vivas. In the last edition, I wrote the article about Cmte Tito, Cmte. Bernardi sent me a video saying he would “pay his debt” to me for an autobiography. Unfortunately, on March 3, 2022, our dear Laudelino Bernardi left for the eternal flight of a unique legacy. May our great friend, mentor, and aviator rest in peace, and his teachings will undoubtedly keep his memory alive. Surely your good advice will be eternal flight companions of many aviators worldwide!