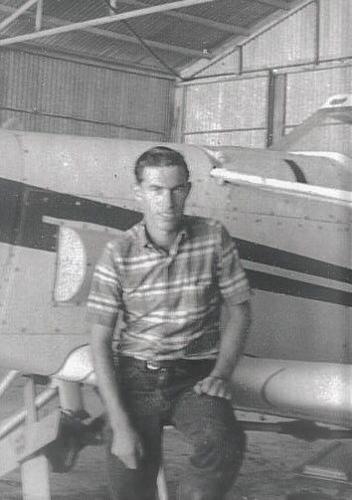 J.W. grew up in Arkansas. In 1960, he moved to Bay City and eventually met his wife, Judy. J.W. had many talents and an adventurous nature. In his younger years, his hobbies included riding motorcycles, flying airplanes, skydiving, and competing in archery contests. He had a love for music and played in many bands throughout the years. As a teenager, he taught himself to play the guitar and could play al-most any instrument by ear (a trait he passed down to his son and grandson). J.W. had a strong work ethic and always had a project. He owned several businesses through his life, including a restaurant or two and an autobody shop, but his career was in agricultural aviation. He owned Kelley’s Flying Service and was a crop-dusting pilot until he could no longer fly. He never slowed down and always had a plan to build or modify something. Later in life one of his favorite things to do was spend time with his “four perfect grandchildren.” His drive and determination can be seen in each of them. He loved watching them pursue their dreams and was extremely proud.

The family would like to thank J.W.’s niece, Leann Rouse, for her strength and support over the last couple of weeks. She was the family’s rock through this tough time. They would also like to thank Simo-na Brumley, Juanita Gonzales, and Hilda Martinez for the care they gave to J.W. over the last month.

Online condolences may be shared with the family by visiting www.taylorbros.net. Arrangements are with Taylor Bros. Funeral Home, Bay City (979) 245-4613