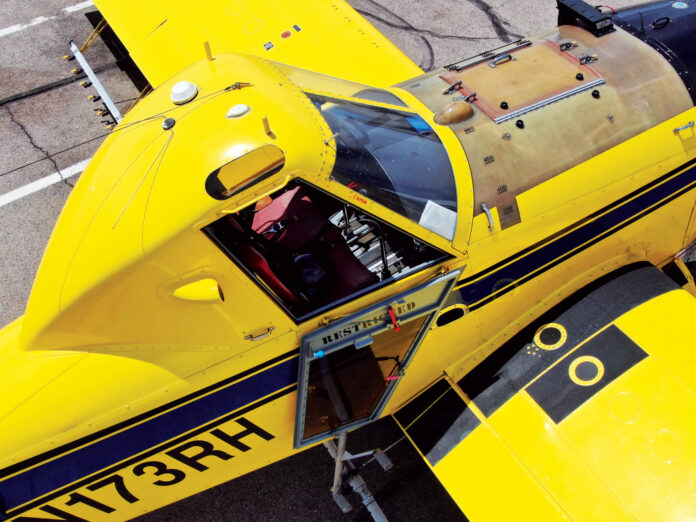 Ag pilot training is one of the most unique types of aviation training. There are many ways to do it; some good, some not-so-good. For many years, the on-wing checkout and the “go out there and fly the thing” seemed commonplace. However, as regulations change and airplanes become bigger and faster, more and more new pilots are turning to a disciplined training program that considers faster airplanes, obstacle avoidance at high speeds, emergencies and turbine engine operation.

Simulators have also made their debut into ag aviation training, providing valuable training for turbine engine management, including starts and emergencies. They allow for training in situations that are impossible to train for in real aircraft – inadvertent IMC, catastrophic component failures – just to name a few. A newcomer to the training sector in agricultural aviation aims to put the missing piece into the puzzle – the jump from the simulator (or slower aircraft) to the faster, larger turbine powered aircraft.

Griff Malleck grew up on a farm in Indianola, Nebraska, where his dad, grandfather and great

grandfather were all successful farmers. Griff says his father did not want him to be a farmer because of all the stress of farm life. Since his dad loved planes and his uncle flew for a living, becoming an airplane mechanic seemed the best choice. Griff started flying at age 16 and got his pilot’s license a year later. He married his high school sweetheart Vickie and they moved to Broomfield, Colorado, so he could attend school to become an airplane mechanic. When he graduated, he could not find a job in Colorado, so they moved back to Nebraska and Griff took a job at McCook Flying Services.

Griff purchased Red Willow Aviation in 1980, and at the time, operated it as a maintenance repair shop and aerial application business with a 400 Brave and Cessna C-188. He knew he had to continue doing new things to stay competitive, so throughout the 1980s and 1990s, he tried many new ideas and eventually got into the bulk sales chemical business and formed Red Willow Chemical. In 2003, the company outgrew its location at the McCook Ben Nelson Regional Airport and moved into its current, expanded location just off the airport.

Griff credits Vickie, his wife, for much of their success at Red Willow Chemical. Vickie worked full-time to provide for the family and make sure bills were paid during the early years when Griff was just starting as owner of the company. Griff says that even though she never actually worked at Red Willow Aviation, Vickie was integral to its success.

After an accident in 2019, Griff knew that with his ever-expanding business, he would need help managing aerial applications and chemical sales. Cleo Spencer, who had recently moved back to the area and had an extensive background in finance and banking, was just the person. Cleo had helped Griff through the years with accounting and a happenstance conversation led the two to become somewhat of partners, with Cleo acting as CEO.

Cleo purchased the business in 2021, and he went to work crunching numbers and looking toward the future. After he ironed out the business essentials, Cleo put together a solid plan that upgraded the current fleet of aircraft and incorporated a unique training program into the mix. He also reimagined the chemical sales side of the business, seeing over a 170% increase in sales and deliveries by adding talent and changing the culture. Cleo says, “Honestly, without our great employees and their dedication, we wouldn’t be doing as well.”

Red Willow Aviation purchased an AT-504 out of Texas to fill the gap often created between a pilot transitioning into a larger turbine aircraft. Their unique program utilizes a minimum of five hours of flight time in the aircraft with an experienced Air Tractor pilot, covering all the basics of aircraft and spraying operations. However, one aspect of the program makes those five hours extremely effective – simulation.

In partnership with Turbine Training Center in Manhattan, KS, all students enrolled in the Red Willow Aviation program must complete the aircraft familiarization/simulation course with Turbine Training Center before they get into the aircraft. This saves valuable time and the student comes ready to learn aerial application techniques instead of emergency procedures and starts; after all, that’s what the simulator is for.

“Our goal is to help the industry produce competent, well-trained pilots and increase overall industry safety and the combination of aircraft-specific simulation and flight-time is a recipe for success,” comments Cleo.

Flights typically last around 1-2 hours, twice daily, depending on the weather. Red Willow charges per flight hour with a minimum of five hours. Turbine Training Center collects the simulator training tuition. After the first five hours, any additional flight hours are at a reduced rate.

In addition to the training program, Red Willow Aviation still runs an active aerial application business, general aviation flight school, an FBO, and a maintenance shop with PT6A capabilities. They have a new Thrush 510P2+ ready for delivery at Mid-Continent Aircraft and a turbine AgCat used in daily operations. The AT-504 is also an active aircraft when not used for training purposes.

Cleo Spencer’s first year at the helm of Red Willow Aviation has been a whirlwind. But with students booked throughout next year, he has indeed seemed to have found the missing piece.