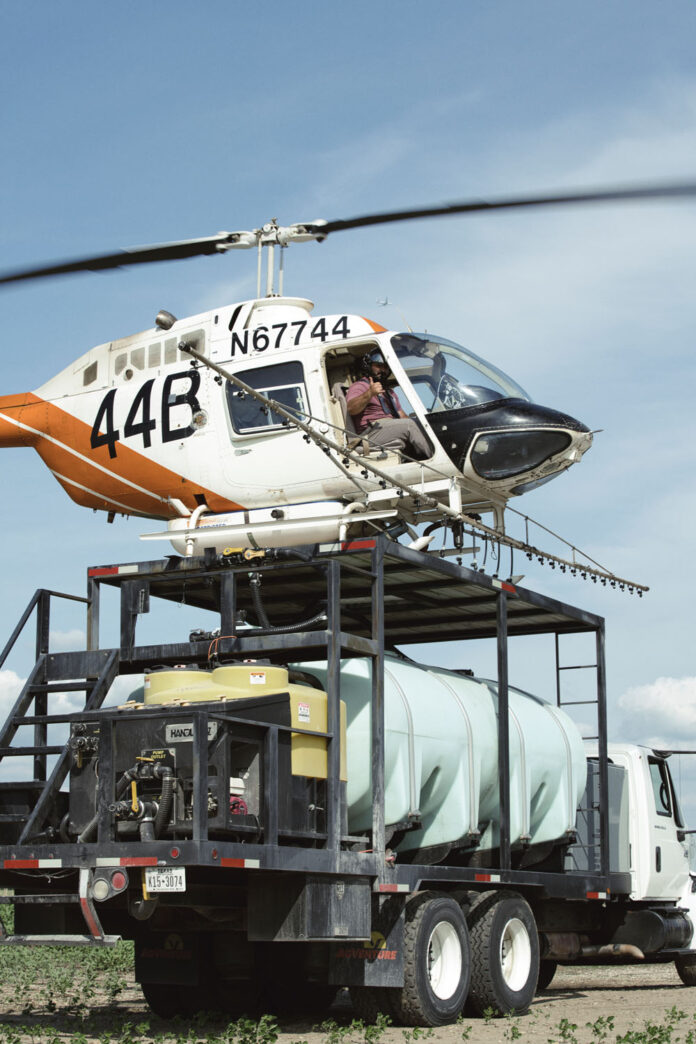 The corn run of the American Midwest is a colossal event that shakes the aerial application community from coast to coast. Months of preparation have been spent readying to begin at a moment’s notice, as signaled by the tasseling of the corn. Applicators journey from every corner of the country to assist in the looming workload ahead – a silent monster is preparing itself in kind. This gathering takes place at remote airfields like Hendrickson Flying Service, a small grass strip summoning a fleet of fixed and rotary aircraft, support equipment, and personnel. Arrangements are all in place, staged to begin at a moment’s notice.

The signal comes, engines roar to life out of hibernation, staggering levels of acreage needing the critical role of agricultural aviation pour in, and the aircraft roll out. The hours stretch into infinity, timelines genuinely unknown, and completing the day’s workload is the only recognizable target; anything further out than today is impossible to predict. The intensity of that day’s labor is grueling. All that can be expected is that tomorrow’s labor will be the same as today’s – sunup to sundown – a nonstop Olympic-level test of endurance where mistakes can claim life.

Reprieve does not come in the form of rest but instead from comradery, at least that can be said of my experience at Hendrickson Flying Service located in Rochelle, Illinois, off the Lincoln Highway. Anyone involved can count on anyone to lean on, where help from each other is never in short supply. The assembled team at HFS was the most profound group of professional aviators I have ever had the pleasure of working with. The aviators, loaders, drivers, and office personnel all came together and formed a family away from home. We all woke to the same beat, worked the same hours, prepared meals, and ate together – outside of the aircraft, an observer would be unable to tell who belonged to what role in the operation – all equals in respect, all working for value.

Before my time here at Hendrickson Flying Service, I had only experienced this community level in one other place – deployed military operations. I suspect this is no accident as the founder of HFS, Chuck Hendrickson, was a Vietnam combat veteran. He started this company after flying Huey helicopters for the U.S. Army. It is my belief and experience that Chuck’s exposure to military maneuver, combat, and leadership is what ultimately has developed the HFS community into what it is today. I never got to meet the man as he passed away before my arrival into his world; however, I feel I have got to know the man he was through the community he built and through his surviving family.

Chuck Hendrickson’s American dream started long before his family’s piece of land was ever home to an airstrip. He grew up on the Hendrickson dairy farm, where he worked since he was a young child. Aviation came into his life young as well; he soloed his first airplane, a J-3 Cub, on skis as a high schooler. After two years at Western Illinois University, Chuck signed up for the U.S. Army as a Warrant Officer Candidate with a path toward rotary wing flight training. On his way to the recruiting station, he met a man named Ron Korth, who would become his lifelong friend and work alongside him in the future at Hendrickson Flying Service.

Following U.S. Army flight school and achieving his rating as a UH-1 Huey pilot, Chuck Hendrickson was sent overseas to fight in Vietnam. He was stationed with the 1st Calvary Division, 229th Battalion, C Company. In the most unlikely of circumstances, it was here that Chuck found his lifelong passion for aerial application. The mosquitos were ravaging the camp, making life unbearable. Chuck, a farm boy at heart, got to work and had a small homebuilt spray system put together and strapped to the skids of his Huey. He dispensed malathion across the camp, controlling the mosquito population and saving the sanity of all who lived there. Chuck had a habit of sending recorded tapes home instead of letters and can be heard on a recording stating that he knew exactly what he would be doing when he returned home – aerial application.

Chuck’s tenure in Vietnam ended, and he returned home a Purple Heart recipient. His final post with the military was as an instructor at Fort Walters before returning home to his family’s farm. He had accrued a small amount of combat pay and used it for precisely what he said he would do upon his arrival home; he rented a Schweizer 269 helicopter and a truck; Chuck’s American dream was starting to take shape.

The business was good, and one helicopter quickly became insufficient for demand. A second Schweizer 269 was added, and eventually, he grew his fleet to five. Following the Schweizer, Chuck added the mighty Sikorsky S-55 to the inventory – a considerable development in Hendrickson Flying Service history. The addition even made the local paper, which is still framed on the wall of their office today.

Fixed-wing aircraft became inevitable, and Hendrickson Flying Service acquired its first non-hovering aircraft, Stearman biplanes, purchased from M and M Flying Service in Texas. At this time, Hendrickson had the five Schweizer 269s, the Sikorsky S-55, and the Stearmans all running out of his home airstrip, the dairy replaced with a runway and hangars. At this time, most of the work was cannery contracts for vegetables.

Eventually, the Schweizer and Sikorsky helicopters became impractical in their work capacity and increasing maintenance needs. They were replaced with the workhorse Bell 47 in multiple variants. Similarly, the Stearmans’ time ran out and had to be replaced with Weatherly aircraft and two 301 Air Tractors. This fleet continued to run until the mid-90s, when a piston-powered M18 Dromader was purchased. This continued until the early 2000s when two turbine Dromaders, a B model Huey and a Grumman Ag Cat entered service at HFS.

Perhaps the oddest addition at this point was that of the Piper Pawnee. Sitting in a barn for a considerable amount of time, it needed extensive repair, but Chuck bought it with a purpose. He hired a young new pilot, Ross Norbury, who cold-called him looking for a seat fresh out of flight school. Chuck gave him the opportunity to rebuild the Piper Pawnee and, in doing so, earned himself a seat flying that aircraft. Ross accomplished this goal and is still flying with Hendrickson in one of the two Thrush 510P aircraft. The Pawnee now serves as a training platform for new pilots and is currently flown by a young woman, Cassidy Ogg.

The current fleet continued to adapt and change with the needs of the company, which now consists of four Bell 47 variants (two Wasps, a Tomcat, and a G2A – not counting the several remains of more in the North Hangar), two Bell 206 Jet Rangers, two Thrush 510P and one Piper Pawnee. Additional aircraft used for ferrying parts and training: a Cessna 172, Cessna 150, and an Aeronca Champ.

The helicopters at Hendrickson Flying Service utilize the AgNav Guia GPS system with flat fan nozzles. The airplanes are outfitted with SATLOCs with a poly-aerial triple-tip nozzle design.

Today, Hendrickson Flying Service’s day-to-day operation is run by Chuck’s son, Cameron Hendrickson.  Judith Hendrickson, Chuck’s wife, remains involved as well – her presence is deeply felt and respected when she joins in the action during the corn run season.  The pilots in the organization also double as the mechanics in the off-season.  Cameron and Eric Bell are the in-house Inspection Authorization (IA) mechanics.  Andrew Feher, an aircraft loader, is also an A&P in the off-season or as needed for the mission.  Some loaders are long-time hires and private aviators; they work in the industry while awaiting a seat, gaining the knowledge and experience to make them expert aviators when the time comes.  Others are hired for the season and are new to the industry, just wanting to see what it is all about.

Outside of the corn run, Hendrickson Flying Service works with the Boll Weevil Foundation out of the Rio Grande Valley in south Texas.  Between April and October, they have been sending multiple helicopters to the valley annually for nearly two decades.  At this very southern tip of the United States, the Boll Weevil is suppressed from reentering the American cotton crop and destroying the entire industry as it did back in the 1920s.

Chuck Hendrickson built so much more than an aerial application company. He built a culture inspired by his longtime dream and allowed others who found him to build theirs under the umbrella of HFS. His family carries that dream forward today; in doing so, Chuck lives on. His requiem cannot be heard through the pulse of a stereo but rather from the roar of aircraft off his family farm. It can be seen in the sky on a mid-summer day, that gentle dance of an aircraft against the horizon as it turns in towards its next pass. The community he fostered and grew remains, his work continues, and his legacy echoes into the lives of all those who work here. If you desire to work hard, without ego, to be a part of a community that values each other and always offers a helping hand, then HFS will bring you success.

That was some good runnin’. “Off again, gorgeous day” – Maurice Wilson

Author’s Note: Situated along Monterey Bay, I consider the apple orchards of Corralitos, California, home.  Before my career in aerial application, I served with the United States Air Force and eventually trained as a helicopter pilot through the same warrant officer route that Chuck Hendrickson followed decades earlier.  After my military career, I wanted to return to my family’s roots in agriculture and found work flying a Bell 47G5 with Wilbur-Ellis in King City, California.  My path led to Hendrickson Flying Service in the Illinois and Texas operations.  Outside of work, I enjoy traveling, photography, and writing – a good combination that keeps me fairly busy in the off-season. I wanted to extend a special thank you to my family, especially my two children, Addison (11) and Lia (7), for their enduring patience while I am away from home working. – Josh Alameda