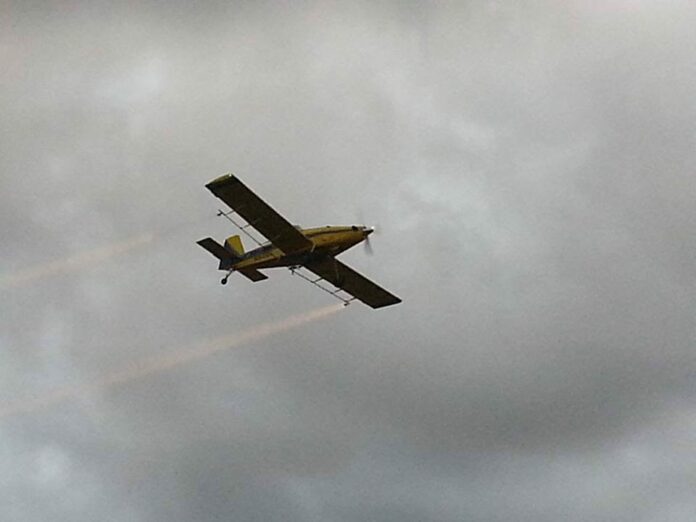 Since 2020, rotary atomizers manufactured in Brazil have been evaluated for aerial mosquito control in North America. In April of 2022, Turbine Conversions, Ltd. and Vector Disease Control International (VDCI) conducted a research protocol in Utah and evaluated the droplet spectrum offered by Zanoni’s Brazilian rotary atomizer.

In 2018, when Zanoni Equipamentos participated in its first Ag Aviation Expo, the Brazilian manufacturer of aerial application technologies took one of its rotary atomizers to the US (today, this is the type of application technology most used for aerial spraying of insecticides and fungicides in South America). The Hatfield family put Zanoni in touch with an operator in South Carolina, Al Allen, who provides aerial application services to farmers on the East Coast with his Air Tractors and Thrushes. In addition, it has also been working for the last three decades with mosquito control using its agricultural fleet and its Piper Aztec, performing prevention and emergency response services for counties in South and North Carolina.

Al Allen in South Carolina
1 of 5

After some suggestions from Allen Aviation, Zanoni Equipamentos made some adjustments to its atomizer and sent the first set of nozzles to work with mosquitoes in the USA. Along with an American chemical manufacturer, Al Allen performed several tests with the atomizer to ensure it would provide good results. The performance of the equipment since 2020 has been very positive, offering the precise and necessary droplet spectrum for the application of adulticides.

With feedback from the first experience, Mark Grahek (responsible for managing Zanoni products in the US) saw an opportunity to help the North American market with this new product. Since then, Turbine Conversions has conducted several tests with the Zanoni atomizer in partnership with mosquito operators in the US (in addition to several scientific research for controlling forest pests in Canada). The most recent of these was with Vector Disease Control International. Based in Arkansas, VDCI was founded in 1992 to provide comprehensive Integrated Mosquito Management (IMM) programs designed to protect public health through mosquito and disease vector control using scientifically and environmentally sound products and strategies. The company operates in more than 20 states and abroad, serving municipalities, mosquito-control districts, communities and associations, residents, golf courses, industrial facilities, state and national governments, and the military.

Within its wide range of services, aerial application stands out for allowing the treatment of vast, dense, or dangerous areas for teams working in trucks or on foot. The company highlights that this is a crucial tool for scenarios with a small treatment window and when a threat becomes very large.

The new project, led by Turbine Conversions, originated from conversations between Mark Grahek, Broox Boze (technical director of VDCI and the American Association for Mosquito Control, AMCA), and Lucas Zanoni (responsible for R&D and international business for the Brazilian company). After a brief online meeting, Mark and Lucas took VDCI to a virtual meeting with Brazilian experts to exchange information, in conversation with Julio Kampf (president of IBRAVAG), Gabriel Colle (executive director of SINDAG), and Eduardo Araújo ( SINDAG consultant currently responsible for promoting aerial mosquito control in the country).

In addition to helping Brazilians with strategies to expand the use of aerial applications in mosquito control, the American company has now helped Zanoni implement a field research protocol. Held in Utah in late April, the aircraft clinic evaluated the droplet spectrum of Zanoni atomizers on a Navajo Chieftain and a Piper Aztec. Calibration tests with the Zanoni M14 atomizers showed that they could meet the requirements of adulticide package inserts (Dv0.5 <60um and DV0.9 <115). Boze gave us his impressions of the results:

“This is the droplet spectrum pattern we need for mosquito control. Tiny droplets to ensure that a large number of them are on the target (i.e., a high density). This is how we manage to kill the mosquitoes and ensure a safe aerial application.”

The VDCI team also gave us more details on the specifics and requirements of this type of work, which requires coordination with local authorities (for health and environmental reasons) and communication with local aviation agencies (as pilots fly over urban areas). But despite being a different type of aerial application, it has many characteristics similar to crop protection.

Like many others in the last decades, this project is part of a long cooperation process between the aerial applications industries of the two sister countries. Brazil has received many new aircraft, with almost one hundred coming from the USA annually. This has given our industry maturity and helped both countries to fly faster. With atomizers, the Brazilian aerial application technologies industry can now help North American operators with a better solution for low-volume jobs. In the meantime, all the experience and knowledge brought from the United States can help Brazilian agricultural pilots promote mosquito control in the future. This is a win-win situation that should last for years to come.