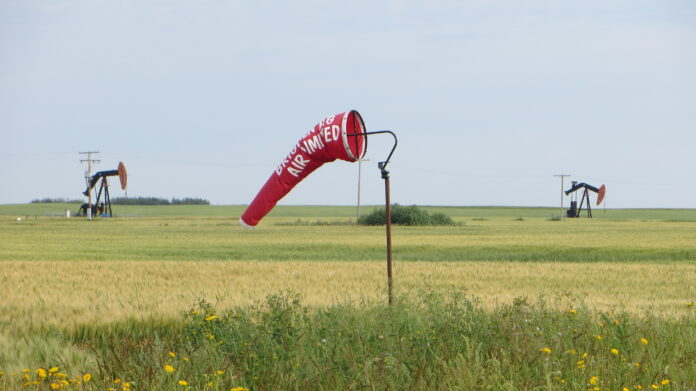 For many people, hearing the term Bakken Formation draws a blank stare. For others living in Montana, North Dakota, Saskatchewan, and Manitoba, it means ‘oil patch’ country. Underlying these areas lie rich deposits of oil and gas produced millions of years ago when the area was covered in an immense body of water known as the Western Interior Seaway. Over the millennia, the vast tract of prairies came into being as the waters subsided.

Today this area is peppered with oil derricks, pumpjacks, and powerlines, and because of the largely flat terrain, also hosts some very unusual wind shear phenomena, which is all very good unless you are an ag pilot and your standard application height is 10 feet or so above the millions of acres of wheat, canola, and other crops.

Talk about hazards to navigation! Let’s start with pumpjacks, also known as nodding donkey, beam pump, horsehead pump, Big Texan pump, or donkey jack, to name but a few. They pump liquid out of the well and stand from 40 to 50 feet in height.

The issue is not flying over just one, but because they are placed in large numbers, usually close together when dozens or even hundreds of units can be seen simultaneously. It becomes something of going up and down like a Yo-Yo, all the while trying to time the booms on and off appropriately. What you don’t want to do, especially when fully loaded with little excess power, is to be too aggressive in trying to reach that optimum spray height between units. Suppose you can do it safely, fine. If you can’t, that’s fine too. You don’t get paid extra to put on an airshow.

This becomes even more critical when you have a tailwind that increases your groundspeed significantly, making the pushovers and pullups even more difficult. Leave yourself a very healthy safety margin between units so that something untoward doesn’t occur. Keep in mind the number one item in ag flying: “Safety first!”, all else a very distant second.

And to make your day, oftentimes, when the major portion of the pumpjack is removed, there is a single narrow steel cylindrical column the full height of the unit left in place. This is very hard to see, so be prepared that if you see a station without a pumpjack, the cylinder may still be in place, just waiting to snag a wheel or wing.

Next on the list of hazards to navigation in the oil patch are the huge hi-voltage 230 kV transmission lines that transport bulk electrical power from a generating station to electrical substations. They are often found in oil patch areas because of the co-presence of vast coal deposits that fire main generating stations. You often see a labyrinth of transmission lines heading off in the four compass directions from these stations.

The towers stand between 100 and 150 feet in height and are by themselves a definite hazard, although easy to see. The transmission lines themselves provide the major hazard, and the question is, do I go over or under the lines?

The decision to fly under the lines must first have one question answered in a very loud ‘Affirmative!’: is there sufficient space under the lines to make it safe? This is not something where ‘probably’ or ‘kinda looks like it’s OK’ pass muster. It has to be “Yes! There is plenty of room”.

Also, there is quite a difference between underflying in an AgTruck with an eight-foot height at 115 mph and an Air Tractor 802 with a thirteen-foot height at 140 mph. Yes, size does matter.

Two last comments on the structures themselves. At the very top of the towers, a smaller ground wire cable – VERY difficult to see – connects the tower tops, awaiting to snag an unsuspecting ag pilot. Also, the main lines themselves can sag considerably due to the expansion of the aluminum or copper materials as they become hotter due to increased air temperature or power load. What you could safely fly under in the morning may not be safe in the afternoon.

There is also the issue of wind shear or a steep wind gradient, where there is a considerable difference between wind strength even between layers separated by only one or two hundred feet. This was covered in detail in the March 2020 issue in the article “Low-Level Wind Shear – the Invisible Enemy.”, but here is a short quote covering what happened as I was flying over a transmission line because there wasn’t enough room to underfly.

“So on I went until it was time to pull up, but as I pulled back on the stick, the only thing that was zooming was my heart rate. The airspeed was headed in the wrong direction fast, the controls were starting to feel mushy, and that darn tower was getting bigger and bigger.”

Luckily, I cleared the tower and associated lines. The culprit (other than myself and lack of awareness) was a drastically stronger wind at tower height than at application height (Figure 1). As I pulled up, this resulted in a significant and rapid airspeed decay. It could have easily been a bad day at the office.

The quickly changing nature of prairie winds is also something to contend with. I had just landed and was shutting down as the winds started picking up and veering. My colleague Jeremy Knibbs had radioed he couldn’t spray off his load because of a system failure. He said he would be coming in to try a landing with a full load, something he had never done before, and in an aircraft in which he had less than 50 hours PIC. If it wasn’t going to work, it would be jettison time.

Of course, Mother Nature must always be in on the action and announced a noticeable increase in wind strength and crosswind component via the windsock.

Jeremy’s first attempt using runway 35 was into the wind, but this was greatly complicated by a grove of trees at the approach end of the runway, which by now the significant crosswind converted into nasty ‘rock and roll’ eddies, which resulted in an approach and flare that precipitated a go around.

He then decided it was better to land on 17 with a downwind component, with no obstacles on the approach path. He made for a long setup and final and absolutely greased the landing with a smooth and uneventful rollout. Nice job indeed, and a great way to end another day of ag flying in the oil patch!