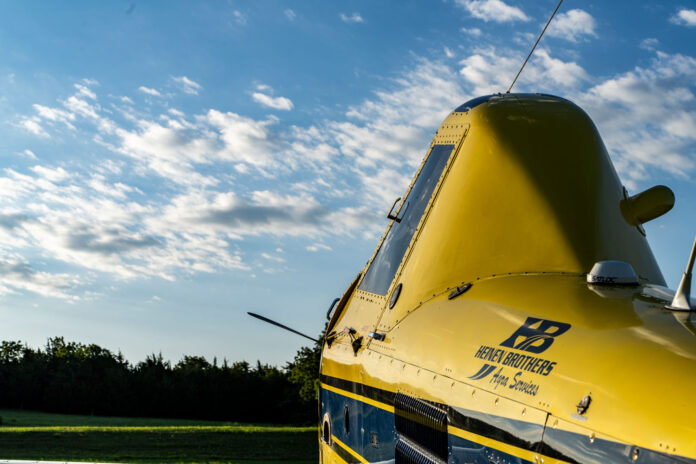 Scott and Glenn Heinen’s roots are deep in Kansas agriculture. Raised on a 700-acre farm, there was no doubt that the brothers would make it their life’s mission to continue in the field they grew up in. Scott and Glenn, along with their sister, all graduated from Kansas State University, Scott with an Aviation Sciences degree and Glenn with a degree in Agronomy. Little did both know that these decisions, having been made at the very start of their professional careers, would lay the foundation for an expansive and diverse agricultural and aviation business in the future.

In 1993, fresh out of A&P School, Scott Heinen knew immediately that he would be around ag planes. He was initially employed by Hetrik Aviation in Topeka, KS, as an A&P but had an opportunity to migrate to Ellenwood, KS, to work as a loader and potential pilot. He showed up, and instead of learning which chemical went in which tank or how much fuel to put in for the next load, he was placed in the cockpit of a Cessna 188. “The only thing that saved me on that initial checkout was the wind kept blowing right down the runway!” comments Scott.

At 23 years old, Scott finished the first season with Ellenwood Flying Service, then came back home and asked his dad to co-sign on an ag plane so Scott could start his own business. Scott reflects on the first year “It was a leap of faith for both my dad and me. After studying the numbers repeatedly, I knew I needed 6,000 acres to break even. I was a nervous wreck that first year out on my own. So, I put some ads in the paper and went to work.” That leap of faith paid off, as Scott was overloaded with pasture and wheat work the first year. He needed the 6,000 acres but ended up with over 21,000. Those 21,000 acres were covered with the Cessna, Scott doing all the flying and his brother, Glenn, loading the airplane.

The following season those acres jumped to over 30,000. Scott and Glenn had to call in reinforcements. Not only were the acres piling up, but Glenn was heading to college to pursue his degree in Agronomy.

In 1998, Scott and Glenn had the foresight to expand beyond just aerial application – they wanted to be the one-stop shop for the grower. They purchased a Rogator and knew it was time to start selling product. Scott also saw an opportunity to mentor Glenn in spraying and taught him the craft while Glenn was in college.

In 2001, Glenn graduated from KSU, and the brothers rebranded the business to what it is today, Heinen Brothers Agra Services.

As the business grew, the brothers upgraded from the Cessna to an AgCat, then an AT-301 and Pawnee by the end of 2001. In 2004, Heinen Brothers added two AT-401s and became a dealer for  Pioneer Seed. This propelled the business into input sales.

The fungicide phenomenon hit the business in 2005/2006, and the aircraft additions began for the company. Two AT-402s with PT6A-15s were purchased from Southeastern Aircraft Sales. Over the next six years, over eight AT-502bs were added to the fleet. In 2014, two new AT-802s were purchased from Farm Air. The business was thriving.

Heinen Brothers’ first acquisition was Bonne Idee in 2013. Since then, the business has acquired operations from Idaho to Oklahoma to Arizona. In 2020, Heinen Brothers purchased all of the Wilbur-Ellis operations in Kansas except one. “We want to make it so easy that an operator cannot not do business with us,” comments Scott.

Today, the expansive Heinen Brothers Agra Services have 21 Air Tractors, from the AT-402 to the AT-802, three helicopters (an AS350B3, R44 Raven II, and MD500D), two Piper Braves, a Kodiak, Cessna Conquest II, and for training purposes, a Super Cub and Citabria.

2021 saw the addition of a maintenance shop in Topeka to handle the vast fleet of aircraft. Heinen Brothers Agra Services has seven locations and over 40 satellite locations – from Texas to South Dakota to Idaho to Louisiana.

Technology and marketing are not strangers to the Heinen Brothers’ business model. They have an app that allows real-time acre booking via an online portal – quotes, application orders, chemical orders, and mapping are all available in the one-stop solution for their customers. They even offer in-house financing to the grower. The flying portion of the business is run with AgSync, and the majority of aircraft run SATLOCs, with some utilizing the AgNav platform. The AT-802s are all retrofitted with hydraulics, and all have iPads.

From the single Cessna 188 on a grass strip, with young Scott and Glenn trying to make that initial 6,000 acres, to the vast company, the brothers run today, Scott and Glenn Heinen are a testament to what focusing on the future really looks like.