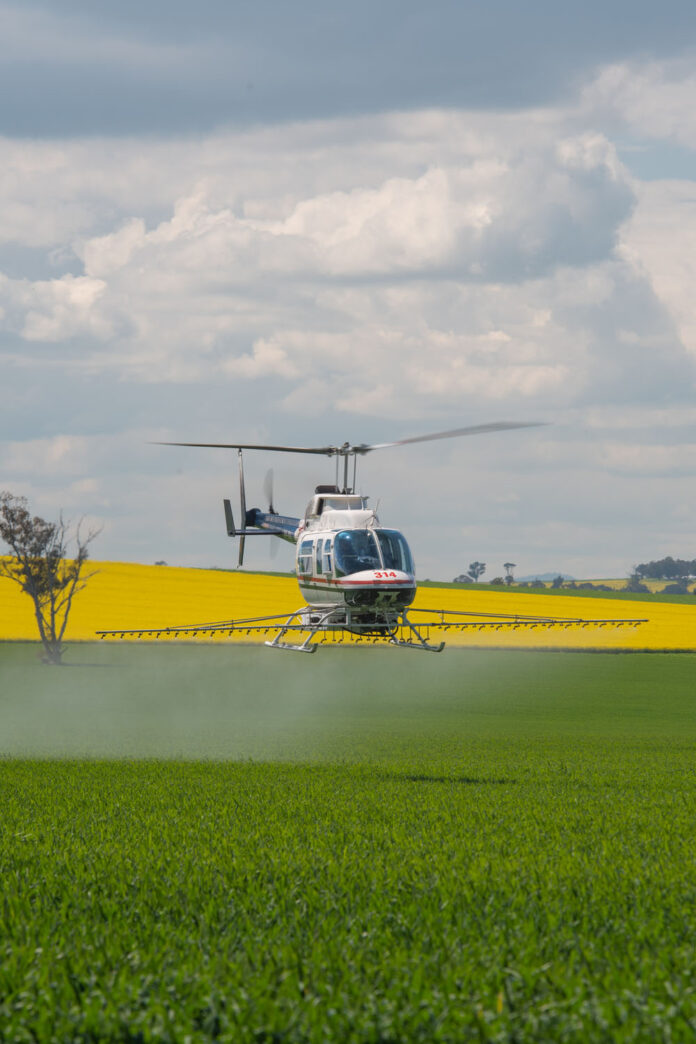 Forest Air Helicopters initially commenced operations in 1988, with current owner John Murray joining the operation in 1992. Murray started the way many in the ag aviation business start – as a loader driver. Having gained his helicopter ratings along the way, Murray progressed to a line pilot, later moving up the ranks to senior pilot, chief pilot, then operations manager for the company;  a position John held for a year before being given a chance to purchase the business in 2005 with his wife, Sue.

For their first several years of operation, Forest Air Helicopters operated out of the original business location north of Albury, New South Wales, before relocating the operation and its sister company, Forest Air Maintenance Engineering, to a 40-acre mixed farm/business property with hangar space near the small town of Jindera, located north of the border town of Albury between New South Wales and Victoria in Australia.

Continuing the company’s existing operations, Murray took over with a single Bell 206 Jetranger, leasing a UH-1H & Bell 206B3 Jetranger from the original owner, and purchasing an additional Bell 206L3 Longranger several years later. Although the fleet has continued to grow over the years, relinquishing the UH1-1H and the B3 Jetranger for the more modern Bell 212, the company still operates the original Jetranger and Longranger today, along with 2 B2 Astar’s (Squirrels) and two Bell 204’s to complete their current operational fleet.

Being a multi-mission fleet that performs forestry and crop applications, the company uses two GPS systems for their jobs – TracMap for applying granulated fertilizer and two AG-NAV systems for forestry/farm liquid application.

Forest Air has an Isolair and a Simplex tank system for wet applications, using Accuflow020 nozzles. They typically apply at around 10 gallons per acre (100 l/ha) when dispersing herbicide for forestry applications.

When conducting crop applications, the aircraft use CP-11s for fungicide/herbicide work at 2.2 to 3.3 gallons per acre (20-30l/ha). John uses Micronair Hydraulic Rotary Atomizers (6) when performing fungicide on forestry or controlling the plague locust population (2). These hydraulic units are believed to be one of few still used for low-volume loads – as low as a half-gallon to the acre or less (5 liters.) The unit delivers a very fine droplet for precise delivery of the product for the customer regardless of airspeed, thanks to the hydraulic system used to expel the product.

Being committed to the quality of the company’s application, John Murray has been steadfast in providing the best service to his customers, which has seen him put all of his equipment through rigorous wind tunnel testing at the University of Queensland in Gatton, Queensland. John explains that with their forestry work, there are 12 to 14 chemical mixes, each of which has been put through wind tunnel testing to produce data that has aided in spray drift prevention. “Put it this way, what’s in the manual detailing what you can do with water bears no resemblance to what it does when you put chemicals with it,” said Murray.

John Murray is a two-term board member of the Aerial Application Association of Australia (AAAA), which gives him more incentive to do the maximum in crop protection in agricultural and forestry work as one of possibly three companies in Australia specializing in forestry application. “Crop protection is part of our management plan. So we tend to do as much research and development as we can. Pattern testing is probably one of the most important things we try and do as often as possible.”

As one of possibly only three dedicated forestry applicators in Australia, Forest Air treats over 10,000 hectares (24,710 acres) of commercial forestry land, treating Australian timber plantations in New South Wales, Victoria and the Australian Capital Territory. While that coverage may not seem substantial, the company treats just as much farmland in a wet year. It will also provide multiple treatments of forestry land with different products based on the growth stage of the wood, in addition to performing aerial firefighting with its aircraft in the summer fire season in Australia.

“I’m more focused on the quality than quantity of what we do. I only have a select few customers. They are the ones that concentrate on growing trees and replacing what they harvest with a strong focus on environmental and economic sustainability practices,” comments John.

With the seasons in Australia flipped from those here in the USA, Forest Air is usually busy from August through July with the combination of wet and dry herbicide/fungicide application, fertilizer application in forestry, and aerial firefighting. However, recent weather conditions have shown that the Australian climate can sometimes be unforgiving. The 2022 season suffered record rain, pushing the ag aviation season long and preventing the start of the forestry application season for Forest Air. That, and with how wet the ground is, will likely mean a very slow, if not nonexistent, fire season for the team for 2022/2023.

Fertilizer spreading for forestry applications in Australia is completed much like aerial firefighting work, with an IMS New Zealand manufactured Ground-Effect bucket capable of spreading 1.2 tons (2700lbs) of material per load. To deliver the fertilizer, Forest Air is provided their product directly by their customer to the reloading point in 1.2-ton bags loaded into a hopper that is then delivered into the bucket approximately every three minutes on average throughout an application.

In addition to fertilizer, Forest Air is responsible for applying liquid herbicide for a pre-planting knockdown and another liquid application for 6-8 weeks post-planting. The company also uses a Dupont spreader for granulated herbicide post-plant application and boron (Ulexite Boron) application for trees at the two to four-year mark deemed boron deficient.

Forest Air will also provide remedial fertilizer for older trees and later-age fertilizer for trees nearing the five-year mark before being harvested.

Forest Air has a core staff of two full-time pilots, John Murray, and an operations manager who is also a pilot. The company also has an office manager, two full-time maintenance engineers, two part-time engineers, and a full-time and part-time loader. During the peak fire season, the company can have as many as eight seasonal pilots to fully staff the operation and several on-call engineers that may be sent into the field or used at the company headquarters to keep up with heightened maintenance requirements during the seasonal peak.

The pilot shortage is just as dire in Australia as in other parts of the world for the ag aviation industry, causing significant issues for ag operators, Forest Air being no different. Just like operators in the United States, Forest Air sufferers from not only pilot shortages but skyrocketing insurance costs and the lack of ability to form an adequate pipeline for pilots looking into the ag aviation market. Insurance minimums still require pilots to have 1500 hours of total time, with at least 500 of that being turbine time, which in the Australian market is more complex and harder to find.

In addition to finding the right pilot with the correct number of hours, CASA, Australia’s regulatory body, requires ag pilots to have an aerial application rating, which is only provided by a few operations spread around Australia, most of which are swamped with work. Therefore, the pathway to ag aviation flying is filled with obstacles and requires a dedicated and determined applicant to want the job at hand. John laments that most pilots only last an average of three years flying as a step in their career progression in Australia.

While annual/periodic check rides are conducted in-house for permanent and contract pilots, John prefers to involve an outside instructor or all flight crews’ annual checking and training. Forest Air will bring an outside instructor from Armidale, New South Wales-based Fleet Helicopters, to conduct training and check rides for all the staff. This method ensures that the team is tested externally by someone unfamiliar with the pilots. John believes this provides his pilots with a more stable training environment and a thorough formal check-ride process.

Forest Air is a family-owned and operated company, with John and Sue Murray running the business. They also have a daughter, Sarah, who assists in many facets of the operation along with her husband, Josh (when time permits from their other careers), and three teenage grandchildren who are actively involved in working in the company where possible. John hopes his grandchildren will one day be interested in flight training. However, he also hopes that they will take a military aviation pathway before returning to the family operation in the future.