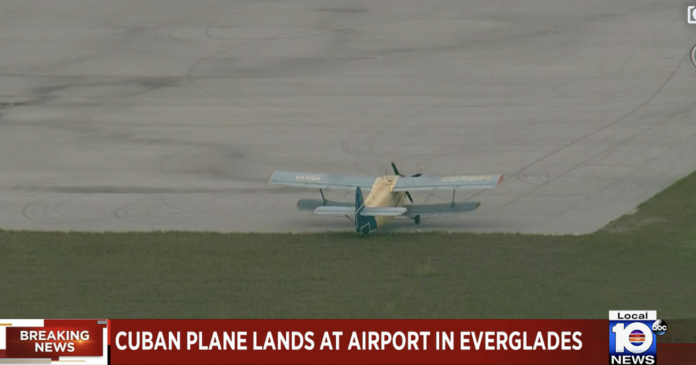 OCHOPPEE, Fla. (from local10news) – October 2022 – Federal agents are investigating how a pilot managed to fly from Cuba to Florida on Friday morning in a single-engine biplane. A witness fishing in the Florida Straits shared a video showing the Soviet-era biplane flying low over the water.

The pilot was a 29-year-old man and he was flying alone, according to Rachel Torres, a spokeswoman for U.S. Customs and Border Protection. He landed the Antonov AN-2 at about 11:30 a.m., at the Dade-Collier Training and Transition Airport, at 54575 E. Tamiami Trail, in Collier County’s Ochopee community.

“The pilot of the plane notified the Miami-Dade County tower at TNT Airport that he was low on fuel and had to land there minutes before he landed,” said Greg Chin, the Miami-Dade Aviation Department’s communications director.

The biplane, which remained near the runway on Friday afternoon, had the yellow and blue identifiers of the Empresa Cubana de Servicios Aéreos, or ENSA, which provides crop dusters in agricultural areas. The plane’s identifier on the right-top wing was CU-A1885.