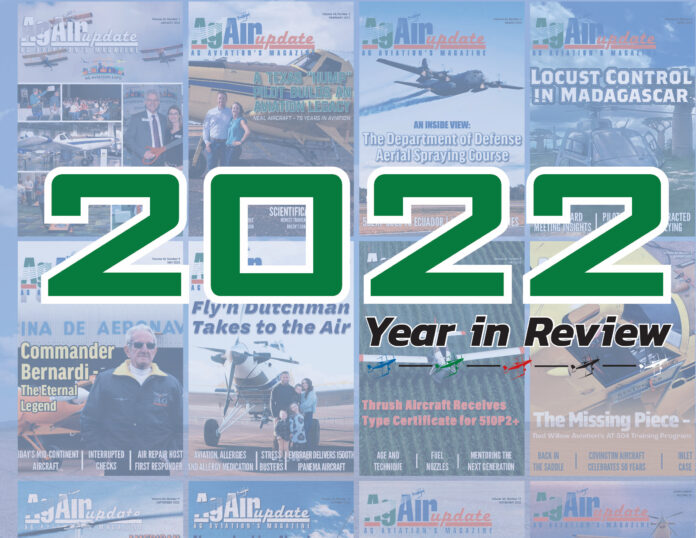 As the tradition has been for many years, this December’s cover story is a recap of the past year’s AgAir Update cover stories. Starting with the January 2022 edition, its cover highlighted the 2021 NAAA convention held in December in Savannah, Georgia. The wonderful city of Savannah has always been an exceptional venue for the convention, and last year was no exception. The February edition features the Neal family legacy. It started during World War II with Roy Neal flying the “Hump” in the China-Burma theater. The article continues describing Roy Neal’s formation of Wes-Tex Aircraft Company and Neal’s eventual introduction to Leland Snow. From that, Neal Aircraft became an AirTractor dealer serving northwest Texas. Roy Neal was followed by his son, Larry. And, before Larry’s untimely death, his son, Robert, took the reins of Neal Aircraft, carrying forward the Neal name as an Air Tractor dealer. One usually thinks of something other than a C-130H Hercules aircraft as a spraying machine. The March edition touts the Hercules aircraft doing just that, spraying for mosquitos in northeast Florida. Actually, the article covers the training involved in this specialty type of spraying. With the April edition, AgAir Update’s long-time French friend, Christophe Drurant, provides a detailed article on how he and fellow pilot Olivier Pascual flew two AS350 B3 Ecureuils (or Squirrels) helicopters owned by Level Up across northern Africa to Madagascar for locust control. It is a fascinating article that describes the challenges these two pilots faced, including two cyclones within two weeks. The logistics are amazing, traveling by 4WD vehicles and managing a workforce. A legend in Brazilian ag-aviation, Laudelino Bernardi, was featured in the May edition of AgAir Update. Mr. Bernardi was the founder of AASD (Aero Agricola Santos Dumont). He trained over 1,000 students to become ag pilots, as required in Brazil, during his over 40-year career. AgAir Update’s June edition takes the reader to Canada for its cover story. Chad Vanderbyl formed his company, Fly’n Dutchman Ag Ltd., in Melfort, Saskatchewan, Canada, in a tribute to his Dutch ancestry. Operating a couple of H80 Thrushes, Chad served on the Canadian Aerial Applicators Association board before becoming its president in 2020. His story is not unlike many ag operators around the world; a family man and business owner doing the vital job of helping feed the world. The July edition is an exciting one with the announcement of Thrush Aircraft’s newly certified 510P2+. This aircraft takes the H80 airframe and replaces the GE engine with a PWC PT6A-140AG engine that provides 867 SHP. The article continues describing the changes and benefits this certified aircraft underwent before entering the marketplace. The “Missing Piece” is found in the August edition. Red Willows Aviation partners with Turbine Training Center to provide an all-inclusive ag-pilot training program. Red Willow Aviation uses an AT-504 to give students hands-on training. However, the student must first complete a familiarization course with Turbine Training Center’s Air Tractor simulator, saving time and money for the student. Red Willow Aviation has found the “Missing Piece” between the jump from the simulator (or smaller, slower ag plane) to the faster and larger turbine-powered ag-plane by incorporating the Air Tractor AT-504 for a complete ag-pilot training course. Josh Alameda writes a superb article capturing the essence of the success of Hendrickson Flying Service in Rochelle, Illinois, in AgAir Update’s September edition. Josh, a helicopter ag pilot from California, describes the comrade found amongst ag pilots during the hectic summer days of the corn run in mid-America. It is a story that needs to be told, and Josh does an excellent job of doing it. If an ag-operation is to succeed, its owner and/or manager needs to “Always Be Looking Ahead,” as the title of the October cover story states. Heinen brothers, Scott and Glenn, formed a flying service in Kansas covering 6,000 acres in a Cessna C-188 their first year. Today, Heinen Brothers Agra Services operates an aircraft fleet of 21 Air Tractors, three helicopters, two Piper Braves, Kodiak, Cessna Conquest II, Super Cub and a Citabria. In addition to their aircraft, Scott and Glenn own seven chemical distributors and a maintenance shop. The brothers have bought operations from Louisiana to Idaho to Oklahoma to Arizona. In 2020, Heinen Brothers purchased all but one of Wilbur-Ellis’ ag-air operations in Kansas. The Heinen brothers are a true testament to what looking toward the future can mean. With a flight to Down Under, AgAir Update visits John Murray’s operation in New South Wales, Australia, in its November edition. Forest Air Helicopters Australia operates a seven-ship fleet of helicopters. Being one of only three helicopter forestry operations in Australia, Forest Air is keen on its application techniques, so much so that tank mixes are tested at the University of Queensland for droplet formation and drift potential. With a focus on pilots’ ongoing training and making the helicopter formula work for aerial applications, John Murray says, “I’m more focused on the quality than the quantity of what we do here at Forest Air.”

This concludes AgAir Update’s recap of 2022 cover stories. The year has presented many opportunities for ag-aviation in all parts of the world, from Brazil to Madagascar to Kansas to Australia and many points in between; ag-aviation is vital in today’s world, albeit constantly changing for the good.