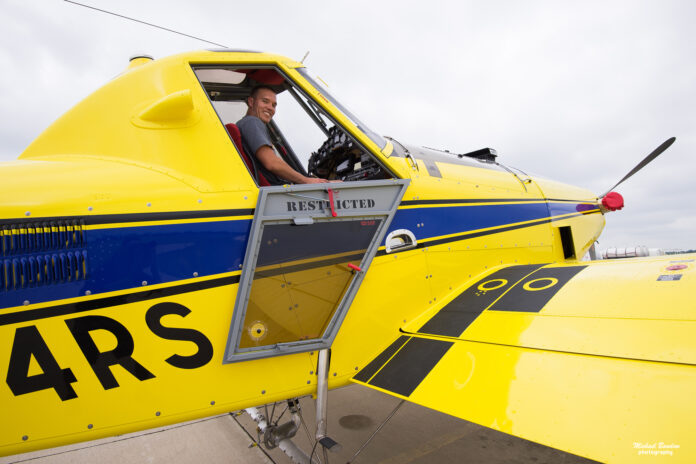 The Hawkeye State is dotted with dozens of aerial application operations, more so when the corn fungicide season is at its peak. Like many of these operations, Stott’s Aerial Spray didn’t appear from nowhere; it’s a family-run operation that has been carried forward for generations. Jerry Stott established Stott’s Aerial Spray in 1980, getting business done as a one-man show with an A9 Callair.

“Dad got into the business like I did when his dad, my grandpa, was an Ag Pilot in Montana. He grew up in the industry much like me”, says Ryan Stott. Today the operation’s CEO, Jerry Stott, oversees operations from the ground while his son Ryan is the chief pilot of the company’s Air Tractor Fleet. Flying has always been a passion for Ryan, but he did not slide directly into the operation. Instead, he enlisted in the United States Air Force after high school, where he served our country as an F-16 crew chief.

“Top Gun was my favorite movie growing up. I always wanted to be a fighter pilot. It wasn’t until later that I realized I wanted to fly ag and follow in my dad’s and grandpa’s footsteps.”

“I knew I wanted to get into the family business and start flying ag. With jets leaving Des Moines and me transitioning to the South Dakota Air National Guard as a part-time F-16 pilot, it was a really good time to get motivated to start learning the ag business.”

After completing ag training in 2013, Ryan took off with the family business and hasn’t looked back. Today the operation consists of Jerry and Ryan Stott, pilots Brock and Brian Chisum, and multiple ground and support crew who keep the operation humming during the busy season. Family-run businesses have their strengths, but relationships can also be complex. Fortunately, Ryan says he and his dad have always gotten along well, and he’s learned a lot from him over the years.

“Working with family, there can be some fireworks, but there cannot be a family business without that.”

Ryan is married to wife Sarah, a Greene County School District teacher. Together they share two children: 9-year-old Rowen and 7-year-old Winnie. Ryan also has two stepsons: Gage, 21, and Rafe, 15. Evolving with current technology is a priority for Stott’s Aerial Spray. Ryan believes that for businesses to stay relevant, they must keep up with the latest ag practices and be ready to provide the most efficient and productive applications for local growers. Running parallel to that evolution, safety is always at the forefront.

“Slow down to speed up, I say a lot. When you get into a rush or hurry, bad things happen. I have incorporated a great deal of my military training into ag flying. Safety is everyone’s job. If you feel uneasy or if something looks dangerous, speak up!”