“Nothing takes the place of horsepower.” 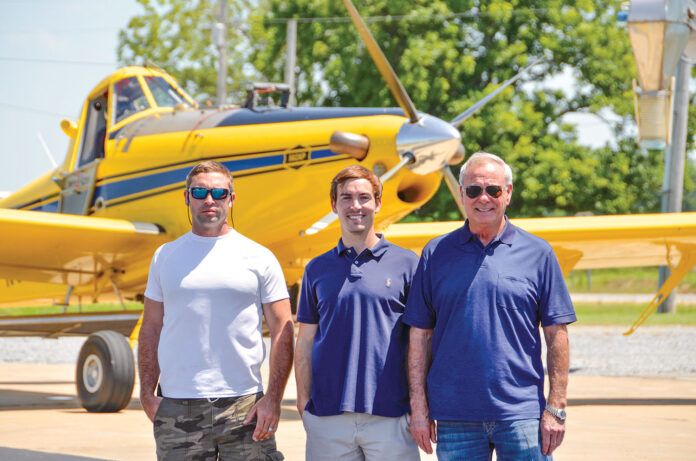 The statement has rung throughout the ag-aviation industry since the days of removing the 220 HP Continental R-670 radial from the Stearman to eventually replacing it with a 600 HP Pratt & Whitney Canada R-1340 engine. Although there are significant advantages to improving the performance of an ag-plane with aerodynamics, “Nothing takes the place of horsepower”. With the newly certified and recently delivered Air Tractor 502XP with its 867 SHP PT6A-140AG engine, that philosophy has come true, again.

The 502XP is a phenomenal machine. Not only does it has more shaft horsepower than its standard sibling the AT-502B with a PT6A-34AG, the aircraft has two additional performance enhancing factors: a four-blade Hartzell propeller and improved aerodynamics. The combination of these three factors creates an excellent ag-plane that is more than capable of hauling a full hopper with full fuel tanks on high density altitude days.

As of the first week of June 2016, three 502XPs are working over crops; Terry Mundell in Oklahoma, Mark Glinz in North Dakota and Frost Flying Service in Arkansas. The 502XP in Arkansas, N502XP, has the most flight time logged. It was Air Tractor’s prototype 502XP and approximately 35 of its 135 hours total time was during flight testing. The remaining approximate 100 hours have been spent mainly fertilizing corn and rice in Arkansas, flown by Garrett Smith for Frost Flying Service.

This is Smith’s third season flying for Frost Flying Service. He is experienced in several ag-aircraft, including the AT-802, AT-602 and AT-502. When asked what he thought of the XP, his comment was, “It sure can pack a load and holds in the turns.”

Smith has been applying mainly 46% urea dry fertilizer on corn and rice at rates ranging from 100 to 250 pounds per acre. The applications are made using a standard 18-foot wide Transland Swathmaster spreader.

“Even with the Transland Swathmaster, the XP can easily ferry at 140 MPH loaded with 2,900 pounds of urea (a full hopper) and full fuel. Once I’m in the field, I often see 165-170 MPH working speeds,” explains Smith. “I have no problem returning to the strip at 160 MPH, just depending on how much I push the throttle up. The aircraft’s speeds are pretty amazing when you consider it has a spreader under it.”

Smith uses reasonably high power settings when loaded. When spraying he uses less initial power and has to continually reduce power to keep the aircraft at a manageable working speed. One photo of the XP’s MVP-50T engine monitor displays at 2,210 PSI and 1,740 RPM the engine’s ITT is a low 712°C developing 724 SHP and burning 69.2 GPH. Smith reiterated the power setting in the photo was unusually high. Typical fuel consumption ranges from 58 – 63 GPH, depending on whether Smith is spraying or doing dry work.

When Garrett Frost, vice-president of Frost Flying Service, was asked why did he believe the XP was so fast, considering the aerodynamics are very similar to the 502B, “It has to be the four-blade Hartzell propeller. Aside from it having more horsepower, I think the prop makes the aircraft faster. It is definitely quieter and smoother than the three-blade version.”

In addition to have a more powerful engine than the 502B, the XP is built as an AT-502A with the large AT-802/602 style empennage. However, unlike the AT-502A, the XPs engine mount has been extended giving the aircraft exceptional balance during flight.

On takeoff with 2,396 PSI of torque and 1,900 RPM, the XP develops 867 SHP up to 111°F and has 1,075 thermal SHP. With this much reserve power, the engine can make full rated SHP at high density altitudes, making it an ideal aircraft where operations are based at higher elevations, or in areas with high temperature and humidity conditions. Off Frost Flying’s 2,700-foot runway, Smith was breaking ground at approximately 1,200 to 1,300 feet with a full hopper and 3/4s fuel and a slight downwind component.

The PT6A-140AG has a TBO that can be extended up to 8,000 hours, or 12 years depending on the operation. It is independent of engine cycles, making it one of the more affordable gas turbine engines in its class. With 15% more power than other engines in its class, it specific fuel consumption is 5% better.

However, nothing takes the place of horsepower, so the XP is an ideal aircraft, even for those ag-operators that like always being able to comfortably carry a full hopper and fuel.

Frost Flying Service is a leading Air Tractor dealer with sales throughout the U.S., Canada and South America. Founded by Jack Frost in 1972, it started as an aerial application business. In 1978, Jack started flying Air Tractors, buying his first turbine model. He became an Air Tractor dealer in 1995, based in Marianna, Arkansas.

“I’d like ag-operators know the XP is here in Marianna at Frost Flying Service and ready for any qualified ag-pilot to come fly and see for themselves what a great aircraft it is. We have a 2,700-foot paved runway with plenty of open fields for putting the XP through its paces,” explains Garrett Frost with an invitation to fly the XP. At this time, it is the only XP available for an ag-pilot to demo.