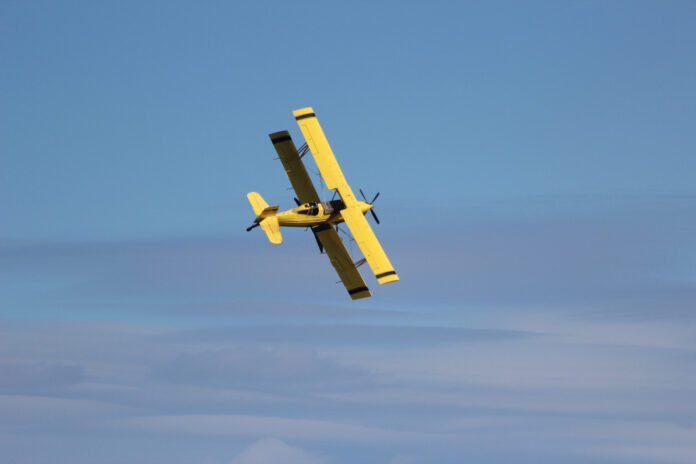 According to the U.S. Department of Agriculture, in 2015, the United States was ranked 12th of 78 countries in the world’s production of rice. The lead country was China with 145.8 million metric tons, compared to the U.S.’s 6.1 million metric tons. There are three major rice producing areas in the U.S.; southeast Texas, Mississippi Delta (Missouri, Tennessee, Arkansas, Mississippi, Louisiana) and California’s Sacramento Valley.

For many years, the Ag-Cat was the primary ag aircraft of choice for working rice. It still is in many areas, particularly the Sacramento Valley. The demand for a high number of takeoffs and landings each day spreading seed and fertilizer, as well as the need to work from short, unimproved airstrips, makes the Ag-Cat ideally suited for this kind of flying. Richter Aviation is a prime example of an operation that successfully utilizes the Ag-Cat having started with two A-Models in 1974 as World Agri Air east of Maxwell, California in the heart of the Sacramento Valley’s rice fields.

The next year, Rick Richter started working on the ground crew. In 1979, Rick started flying his apprentice year under the mentorship of Sommerville and Wade. Four years later, Rick left to form Richter Aviation, operating an A-Model Ag-Cat with a 2,000-acre rice base. He and his wife, Brenda, ran the company from home and flew from Charter Aviation’s base in Williams, California.

The Richters later moved the aircraft to Moller Aviation in Maxwell, but still ran the business from home. In 1988, Richter Aviation set up operations at World Agri Air’s base east of Maxwell, operating from there for nine years before buying out World Agri Air’s assets and customer base with a lease on the airport property and facilities.

Prior to this, Richer Aviation added a 1990 Super B Ag-Cat to better handle the expanding business. With a growing customer base, in 1999, Richter Aviation bought a King Cat from Spain with an R-1820 (1,200 HP) engine. The aircraft came with a 500-gallon hopper, but was modified to hold 600 gallons with a top expansion. Five years later, this aircraft’s powerplant was converted to a TPE331-10 using an Agri-Jet kit.

After eleven years of leasing the airport where World Agri Air started 33 years ago, Richter Aviation bought the 300 acres of land and facilities in 2008. Strategically located in the Sacramento Valley, the company works from as many as two dozen airstrips placing the Ag-Cats as close as possible to their work. The Richters also farm the 300 acres, along with an additional 120 acres they have purchased since then.

The following year, Rick and Brenda’s son, Nick, started flying for the company. Nick flew the A-Model Ag-Cat his first two seasons, as his dad did 30 years ago from the same airstrip. However, Nick quickly moved up the aircraft ranks, flying a Super B for a short while and then a C-Model Agri-Jet conversion with the TPE331-10 his third year.

The fifth Ag-Cat in the fleet this year is a leased A-Model with an R-985 engine. This aircraft will be used to break-in Warren Michael to ag-flying. Warren has been working on the ground crew with Richter Aviation for five years and 2016 is his first year flying ag.

There are about 550,000 acres of rice grown in the 100-mile long stretch of the Sacramento Valley. Not surprisingly, 95% of Richter Aviation’s flying is primarily over rice fields, with the business planting and taking care of 40,000 acres in a full water year. A very small amount of wheat is treated. Applications begin with a starter fertilizer of 16-2-0 or 18-46-0 at 150 to 200 pounds to the acre. Seeding follows with 150-200 pounds to the acre of mostly medium grain rice seed. For the organic rice growers, the application rate is as high as 300 pounds of seed per acre to help choke out weeds.

Dry herbicide applications are made at 5-35 pounds per acre using a variety of chemicals; Cerano, Bolero, Granite GR or League MVP. These applications are for post-emergence of grasses and are applied at the 2nd leaf stage, about 2-3 weeks after planting.

Liquid applications of herbicides are made, too. These are applied at 10-15 GPA using 4015 and 4020 flat fan nozzles. When propanil, a post-emergent grass herbicide, is required, careful considerations have to be made. These applications are highly regulated whereby only 700 acres a day can be treated by air with propanil per county.

Additionally, the county is divided into zones where aircraft can and cannot apply propanil. Because of this, Richter Aviation offers ground machine applications, primarily for no-fly zones. All restricted use pesticides have to be ordered by a Pest Control Advisor (PCA).

Between the seeding and herbicide work, often an insecticide application of Lambda-Cy or Silencer are required to control tadpole shrimp and rice water weevil. These pests feed on the young shoots of rice and can severely damage the stand.

As the season progresses, a top dressing fertilizer is made in late June. This application is typically 21% ammonium sulfate applied at 125-200 pounds per acre. Before the end of the rice season in August, usually, an application of a fungicide will be made to the majority of the acres.

Applications in the Ag-Cats are made at 115-125 MPH. Wet seed is applied using a 32-48 foot swath, while fertilizers are applied with a 40 to 60-foot swath, depending on the product and rate. Liquid herbicides are applied with a 44-foot swath, except propanil, which is applied at 40 feet and 15 GPA. Fungicide applications are made using a 50-foot swath. Every two years, Richter Aviation’s aircraft attend an Operation S.A.F.E. spray clinic for aircraft calibration checks. This is a California requirement of ag aircraft if applying the rice herbicides Clincher Ca. and Regiment.

Rick Richter is a familiar face in the ag-aviation industry, not only in his home state of California but nationwide as well. Rick joined both the CAAA and the NAAA early in his ag-aviation career. He has chaired numerous committees with the CAAA and worked his way through the officer chairs until he was President in 2006 and 2007, and the NAAA State Representative in 2008 and 2009. Also in 2009, he served as NAAA vice-president under President Doug Chanay. Later in 2011, Rick served as the NAAA president.

“I am in my fifth year as a NAAREF presenter for the PAASS program. This has given me the opportunity to travel and meet a variety of people in this business. However, serving as the NAAA president was the pinnacle of my career in aviation.”

Rice is a staple crop that will always be in demand. It is a crop that absolutely requires the services of an airplane, especially in California, where the flooded rice culture demands its use. With over 550,000 rice acres in the Sacramento Valley, and along with ample rainfall, Richter Aviation stands to stay busy.

The end of another long day over the rice fields of California.

(L-R) Nick Richter with dad, Rick, at the NAAA convention and their recently refurbished by American Agviation in Walnut Ridge, Arkansas C-Model Ag-Cat with its TPE331-10 engine overhauled by AgAir Turbines in Midvale,Idaho.

Rick Richter takes on another of wet rice seed.