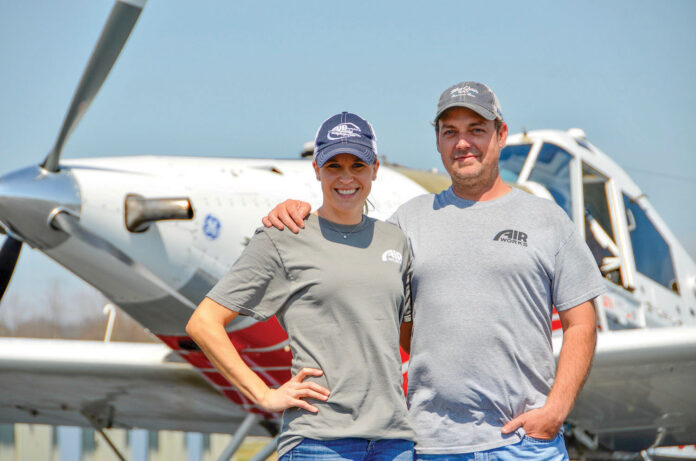 Husband and wife team Justin and Ashley Houston (pronounced House-ton) build an aerial application business from the ground up.

Justin Houston and his wife, Ashley, operate Air Works, LLC based out of Hazel, Kentucky. About seven years ago, Justin and his father, Robert, decided to become involved in aviation. Robert farmed 2500 acres near Hazel and had plenty of land for the two to dive into what would be their new hobby.

The duo bought a Quicksilver Ultralight and with a little instruction began flying the experimental homebuilt off a grass strip on Robert’s farm. The aviation bug bit and over the course of the next few years, Justin purchased a Christian Eagle and his father, a Super Decathlon. Justin completed his private rating and the two dove a little deeper into aerobatics and aviation.

One day, while at a small municipal airport, Justin met ag operators from Arkansas that were passing through the area. After some small talk and the realization he was taking pictures of the ag planes, decided to learn a little more about the industry. Justin and an old friend of his, who had extensive connections through an ag retailer, partnered and bought two Ag-Cats to start their new ag-aviation business. Justin realized that to survive in the ag aviation business, that he would need mentoring. He hired two experienced pilots to fly the 450 radial and -20, turbine Ag-Cats.

Air Works, LLC’s first season was 2012. Justin and Ashley both loaded the aircraft and ran the business, all-the-while learning from industry veterans, who were their pilots. When the aircraft weren’t spraying, Justin would build time in both Ag Cats, to prepare for his commercial rating and eventually ag flying.

In 2013, Justin graduated from Flying Tigers Aviation in Bastrop, Louisiana to polish off his ag training and returned to Kentucky to start spraying. He also hired Lance Lofton to fly the radial Ag-Cat. By this time, both his mentor pilots had fulfilled their obligations and Justin was ready to take the lead pilot role and take 100% ownership of the flying service from his partner.

Justin and Lance flew both Ag-Cats during the 2014 season, while Ashley handled all the mixing and loading, billing and management of the flying service. During Lance’s first season with Air Works (2014), an engine failure landed him in a bean field. His successful dead-stick landing saved the aircraft. Justin decided to sell it and moved Lance into the -20 Ag-Cat and he purchased an AT-502.

Air Works operated the AT-502 and turbine Ag-Cat for the 2015 season. During that year’s Thrush Summer Tour Justin had the opportunity to fly the Thrush 510G at Mid-Continent Aircraft and immediately knew he had to have it. Justin was impressed with the aircraft’s overall handling. It seemed to fit his mission profile better than the AT-502 for longer ferries and heavier loads.

After the purchase of the 510G from Mid-Continent and in less than a couple months, Justin traded the AT-502 for a dual-cockpit 510G from Souther Field Aviation in Americus, Georgia bringing his fleet to two Thrush 510Gs. The dual-cockpit works well for Air Works because most of the work is off satellite strips. Ashley will oftentimes ride back and forth to the airstrips where the loading equipment is located. This helps to keep equipment off the road and the two find they have more time at home.

The 2017 season is already underway for Air Works. Both aircraft at full speed spreading fertilizer on wheat. This year is the busiest, so far, for dry work. Air Works mostly applies insecticide and fungicide applications at 3-5 GPA. Both 510Gs are equipped identically with SATLOC G4s, Stainless Steel Fabricators spreaders for fertilizing and cover crops and CP-11s for liquid. Each airplane has Mid-Continent’s Load Hawg for assisting with fertilizer loading and the standard equipment like smoker, radios, etc.

Justin’s dad, Robert, couldn’t pass up the opportunity to get involved with ag aviation. He bought Justin’s -20 Ag-Cat, converted it to a -27 and as part of Air Works handles all the business around his farm and near their headquarters in Hazel.

Recently, AgAir Update spent the day with Air Works watching the husband and wife duo and pilot Lance, harmonically work spreading fertilizer on nearby wheat. As the two aircraft were back-to-back taking on material, Ashley was loading with the auger truck, booking more acres, ordering material and making sure growers were happy; truly “hou” it’s done.