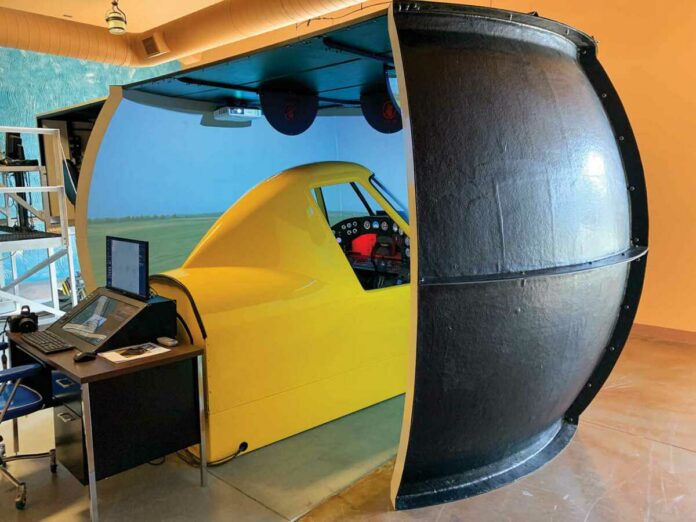 “We’re not teaching you how to be an ag-pilot. You already know how to do that” comments Jason Wolcott to a student as the student is starting the cutting-edge Air Tractor simulator at the Turbine Training Center offices in Manhattan, Kansas. “I’m going to put you in scenarios that every ag-pilot will face, at some time or another in their career, and give you the tools to keep yourself alive.” Wolcott sets the stage for the student, either a freshly minted ag-pilot or a seasoned veteran, and starts the virtual aircraft. Over the next few days, the stationary mock Air Tractor cockpit complete with GPS, force-feedback flight controls and a 270-degree field-of-view, transforms into an ultra-realistic classroom that most students comment, with sweat beading from their brow, “Are you sure the air-conditioner is on?”

Turbine Training Center is a product of a life-long love of ag aviation from Jason Wolcott’s dad and aviation mentor, Dale. Dale started his flying career as a teenager, then joined the Army. It was here that he first gained experience in turbine, powered aircraft. After his military service was completed, Dale continued his aviation training, eventually flying corporate aircraft, becoming a check-airman, FAA Safety Counselor and Designated Pilot Examiner. Dale was a staff instructor for the Air Safety Foundation as well. Over the years and through his vast and varied experiences in aviation, Dale has become known nationwide for his keen ability to teach in and out of the airplane.Dale even earned the FAA, Central region, Safety Counselor of the year award. Dale also earned the Arkansas Traveler Award for his talks given at the 1998, Arkansas Agricultural Aviation Association’s Convention on safety and accident prevention.

In 1981, Dale followed his ag-aviation dreams and with a $14,000, Piper Pawnee started Wolcott Agri-Aviation. Dale loaded the family and drove just north of Garden City, Kansas to pick up the airplane and began his career as an ag pilot. The catch? Dale did not have any experience flying ag. Some local, seasoned ag pilots took Dale under their wings and acted as mentors. With their advice and a bit of trial and error, Dale honed his skills as an agricultural pilot. This method of “self-indoctrination”, fortunately, worked well for Dale. As the business and the demand for a higher capacity, aircraft grew, Dale added Weatherlys to his fleet .

During the off-season, Dale continued to work for the Air Safety Foundation, where he traveled the country teaching flight instructor refresher clinics. Dale also stayed busy instructing and giving check rides. This off-season work led Dale to form GATTS, or General Aviation Training and Testing Service, which specializes in instrument ratings and commercial certification courses. The two businesses, Wolcott Agri-Aviation and GATTS flourished well into the late 1990s. It was also during this time that Dale was introduced to Air Tractors, the AT-402 and AT-502, helping other operators when he was caught up with his spraying. Dale retired his ag operation in 1998, when the demand for turbine transitions and flight instruction outpaced the acres that needed spraying.

Around that time, Turbine Training Center was born. The company started out by first providing turbine transition courses for Ag pilots. Then in 2000 and 2007 respectively, began offering initial and recurrent training programs for Cessna Caravan and Beechcraft King Air 90/200/300 series, utilizing Level 6 full-motion simulators for both aircraft.

Jason Wolcott, Dale’s son, carried on the family, flying tradition and started flying in high school. With his dad as his instructor, he earned advanced pilot ratings, including CFII. After graduating from Kansas State University in 1997, Jason joined GATTS and Turbine Training Center to become a part of the family business.

After many years of seeing the value that comes from the addition of simulators in training, the Wolcotts began exploring the idea of a simulator dedicated solely to agricultural aviation. They set out to vet simulator building companies around the world. In their research, they partnered with an international company that would build the Air Tractor simulator from the ground up. The company found a decommissioned AT-802 and proceeded to make a fiberglass mold of the cockpit. They then recreated, to almost every detail, the interior cockpit of the Air Tractor.

The simulator is configured with most factory options from Air Tractor, with GPS added, and a Kawak throttle quadrant that replaces the factory Air Tractor unit. For pilots that also need some refreshing on radio and navigation work, the simulator has dual Garmin 430s in addition to the agricultural GPS.

The options are limitless for scenario-based training that ag-pilots can experience with the simulator. Turbine Training Center is currently emphasizing inadvertent IMC training for ag pilots. Scenarios from a gradual decrease of visibility on the ferry flight to or from the field, to a realistic fog that surprises you while spraying the field, concentrating on everything but the weather!

Weather is one facet, emergency procedures are another. The simulator affords the opportunity to test the reactions of even the most seasoned ag-pilots in some extraordinary situations. What happens during an engine fire? How are you going to handle the entire cockpit filled with (simulated) smoke? Engine and/or flight control failures? Flight control surface jams? Have you tested that “Emergency A-B line” approach into your airport in full IMC? These drills are where the simulator shines. Although remote, all of the above are possibilities, and more than one of you reading this article either know or have experienced firsthand one of these nightmare scenarios.

It is almost certain that some type of mandated, recurrent training is coming for Part 137 operators. Simulator training has been the mainstay for all other facets of professional aviation for decades. The value is recognized by pilots, operators and insurance companies. Not BFRs with low-time flight instructors in a Cessna 152, but real, life-saving recurrency that every ag-pilot, regardless of how many tens of thousands of hours they have logged, can benefit from. The simulator can provide these lessons and that could save your life. With Turbine Training Center’s ag-aircraft simulator, an ag-pilot can experience real-life emergencies and learn from them without actually have to learn the hard way, an experience that could prove fatal. The “hard way” method may have worked 38 years ago for Jason’s father, Dale, in a Pawnee, but it is not the correct way to learn in a turbine-powered ag-aircraft.