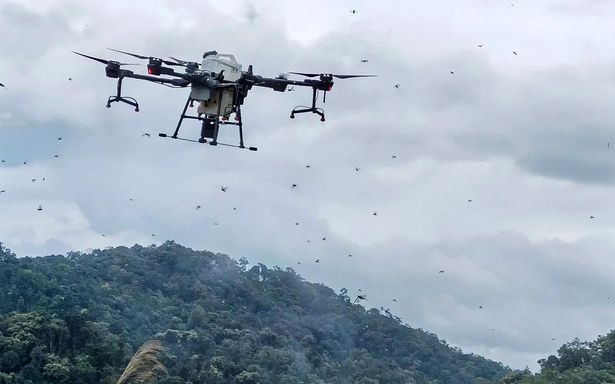 China has deployed hundreds of pesticide-equipped drones to stop a swarm of locusts from invading its farmland and fields. The yellow-spined bamboo locusts have reportedly entered the tea-growing city of Pu’er, in China’s south-western province of Yunnan, after arriving from Laos last month. Officials say at least 8,000 hectares of land has been overrun by the insects as of July 12 and at least 1,400 hectares of that is agricultural land used for the growing of maize, bananas and bamboo.

In an effort to combat the growing spread, China is now using drones to protect land. Video taken by the Pu’er’s forestry bureau shows the unmanned aerial vehicles flying over the treetops and spraying pesticides from above.

Read more on this story at the Daily Star