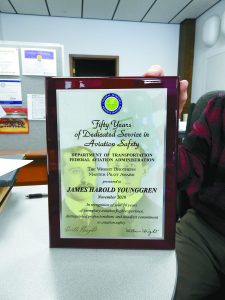 Lifelong friends Jim Younggren and Bill Sugden recently received the most prestigious aviation award for their 50 years of safe flying.

Their formative years were spent in airplanes while growing up in and around Hallock. And in separately telling their stories for the nomination for the Wright Brothers Master Pilot Award, it’s clear they both caught the flying bug early. Sugden first rode with Maurice Sugden – who also received the Master Pilot Award – at the age of 4. Younggren was 8 years old when he first flew with his uncle.

“It’s just amazing how this thing has all unfolded,” Younggren said last week.
The Master Pilot Award is given to only one-half of 1 percent of all pilots in the United States. When Younggren was approaching his 50-year anniversary date as a pilot, Sugden called him up and said he wanted to be his chief sponsor for the Master Pilot Award. Sugden, along with local pilots John Fowler and Jeremy Seng, wrote letters of recommendation and Younggren received his award in 2020. However, due to COVID, there was no ceremony.