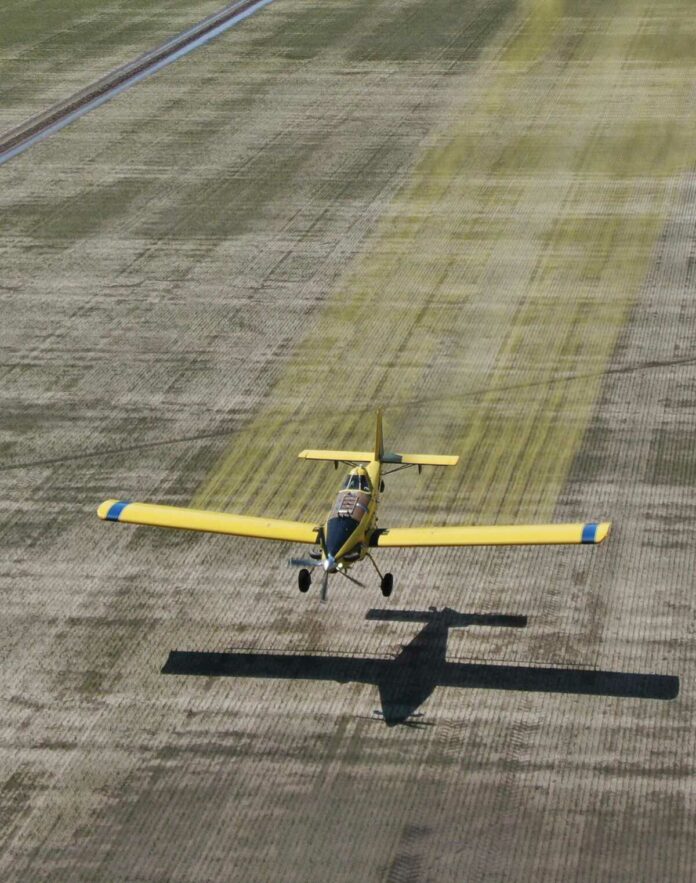 One of the most harrowing experiences of my flying career occurred because of an aborted takeoff. I was flying an AgTruck off a farmer’s 2500-foot grass strip, with a friend of mine flying a 450 HP AgCat. We worked all morning, took a lunch break, then back to work in the early afternoon. As the wind had switched direction, we changed from departing westbound from our mixing/loading area to taxing down the runway for an eastbound takeoff.

I arrived back at the strip with our service truck just in time to catch the AgCat begin its takeoff roll. I watched the aircraft accelerate, and all looked and sounded normal until about ¾ of the way down the strip. Then I heard a distinct change in the engine sound, and the throttle retarded to idle as the pilot had elected to abort the takeoff. I hopped back in the truck and started to head down the strip to check things out. The AgCat must have been very close to takeoff speed when the takeoff was aborted, and I thought at the time it was going to be pretty close to getting it stopped before the end of the runway.

Well, the pilot got the AgCat stopped, but just into the mixing/loading area! I could see that his right brake was billowing white smoke due to the heavy braking.   As the Cat came to a complete stop, the mixer/loader walked directly towards the right brake. Unfortunately for him, the prop was still windmilling, and he walked right into the prop arc. I don’t recall seeing the exact moment he was hit, but as I came around the Cat, he was flat on his back and not moving. At first glance, it didn’t look good, but this was his lucky day, as the only injury he sustained were two deep lacerations to his right triceps.

That incident got me thinking about takeoff aborts because the situation could have had a lot worse ending. The reason the pilot aborted was sound enough – he had lost power in a cylinder and didn’t think he would be able to get airborne and clear the powerlines at the end of the strip.

I was also aware of several other takeoff abort situations that didn’t turn out well. A Turbo Thrush that aborted too late and nosed over and had a prop strike because of heavy braking. My personal experience happened when I was flying a 600 HP Thrush off a remote strip. I was accidentally overloaded but decided I could safely take off with some room to spare. I realized the acceleration was below normal early in the takeoff roll but elected to continue the takeoff anyways. Too late, I finally realized I couldn’t get airborne safely and couldn’t stop before the end of the strip and elected to partially jettison the load to clear the trees at the departure end—an expensive misjudgment on my part.

Keeping these incidents in mind, what are the critical points that comprise an analysis of a takeoff abort?

The situation with the AgCat is relatively straightforward. With the strip being only 2500 feet long and powerlines at one end, there wasn’t a lot of wiggle room to successfully deal with an emergency such as an engine failure on takeoff. This is especially true if the aircraft was close to getting airborne when the emergency occurred. Lightening the load would have been a sound option for the new eastbound takeoff scenario.

A heavier than normal aircraft is one of the primary culprits in pilots deciding to abort a takeoff. It typically happens with an accidental overload or not adjusting load size to the weather conditions (temperature, RH, wind velocity, etc.). If there is an easy way to reduce the load, the odds are that will happen. If there is no easy way to unload the aircraft, odds are the pilot will elect to take the oversized load. It all goes back to planning, such as having a suction probe that can easily be inserted into the hopper to reduce the load to a safe size. Boom caps can be removed as well to remove excess loads. Or, if required, a pail can come in very handy, though time-consuming to use.

Early recognition of a potential abort situation is part of that huge ‘ounce of prevention’ basket. One of the slick tricks of tailwheel aircraft is that they have a built-in acceleration check, i.e., when the tail comes up, the aircraft is on the mains in the maximum acceleration attitude. Pilots should note precisely where the tail normally comes up relative to the runway or other markers, and if by some circumstance it doesn’t happen at the usual point, it’s easy to abort the takeoff run and check things out.

From a pure physics perspective, it’s the kinetic energy (KE) of the moving aircraft that must be absorbed by the brakes or by using Beta, or a combination of the two. The formula for kinetic energy is KE = ½ mv2, where “m” is the mass of the aircraft, and “v” is the velocity. The squaring of the velocity means a rapid buildup of KE with speed. If you compare the KE of the same aircraft at different speeds, you compare their velocities squared. 40 knots squared is 1600, 60 knots squared is 3600, i.e., only a 20-knot difference means the amount of energy that must be absorbed at 60 knots is 3600/1600 = 2.25 more than at 40 knots.

The young lad I mentioned at the beginning is one lucky lad indeed. However, we found out later that he had never been appropriately briefed by the farmer on safety protocols, and neither the AgCat pilot nor I had gone through a safety briefing with him. That could have been a deadly oversight. One of my favorite rules in that regard is that NO ONE except the pilot should ever find themselves ahead of the leading edge of the wing with the engine running unless specifically trained to do so, e.g., with a power cart start.

As with all operations, know your aircraft’s capabilities. An AgTruck that will comfortably handle a 180-gallon load under normal conditions becomes a dog with just 20 more gallons. Same with a 600 HP Air Tractor moving from a standard 360 load to 400 gallons. Not a lot of fun trundling down the runway, wishing you had more runway to work with.

Last but not least, fatigue can be the silent killer lurking in all types of operations, including takeoff abort scenarios. When tired physically or mentally, people tend to be error-prone, such as overloading an aircraft and the pilot accepting the excessive load instead of reducing the load size. Keep an eye out for each other to keep things safe – it’s a dangerous world out there.